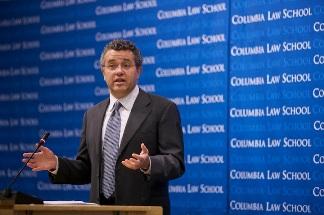 Press contact: Erin St. John Kelly [email protected]
Office: 212-854-1787 Cell: 646-646-284-8549 Public Affairs: 212-854-2650
November 5, 2008 (NEW YORK) – For Jeffrey Toobin (above), the election on November 4 boils down to who will name the next justices to inevitable openings on the Supreme Court, and what those choices will mean for the country. Toobin, a legal analyst for CNN Worldwide, author and staff writer at The New Yorker, described the Republican Party as purposefully politicizing the Court since the election of President Ronald Reagan in 1980.
Introduced by professor Nathaniel Persily, Toobin spoke with historical insight, candor and humor, and even offered some prognostications during the 11th Annual Maurice Rosenberg Lecture, “The Supreme Court and Election 2008,” at Columbia Law School on October 27.

Toobin, who said his interest lies at the intersection of law and politics,  believes that the next president may possibly have three seats to fill – those of Ruth Bader Ginsburg ’59, David Souter and John Paul Stevens.If John McCain is president, he foresees partisan Republican choices to further that party’s agenda. If Barack Obama is president, he sees appointees who will be “in line” with those who may step down.
To illustrate the politicization of the Court since Reagan, Toobin gave a tour of the Supreme Court’s history through many presidents (Johnson, Nixon, Ford, Carter). He described a Court essentially politically unfettered from the party of the sitting president’s politics.
Toobin pointed to the Warren Court’s decisions of the 1960s, which notably found school segregation unconstitutional in Brown v. Board of Education; found the rights to privacy in Griswold v. Connecticut and for the constitutionality of interracial marriage in Loving v. Virginia. He then travelled through the 1970s and the Burger Court, which he said, “was nearly as liberal as the 60s,” his example being the ruling for the right to an abortion in Roe v Wade and for affirmative action in Regents of the University of California v. Bakke.
In 1980, things changed with the election of President Ronald Reagan. “Some of the best and the brightest came to Washington,” Toobin said, among them, future justices John Roberts and Samuel Alito. Led by Attorney General Edwin Meese III, Toobin said, their agenda was to disband affirmative action, speed-up executions and rescind Roe.
He said he wrote his book The Nine: Inside the Secret World of the Supreme Court about the Chief Justice Rehnquist’s era because he thought the court was approaching another turning point in its history, with Rehnquist’s death and the retirement of Justice Sandra Day O’Connor.
Under Rehnquist, a Nixon appointee, Toobin said, the court was a “congenial place, to my great disappointment as a journalist, but my happiness as a citizen.” But, he said, it is useful to divide the Rehnquist court into two parts: 1986-2000 and 2000-2005. The dividing line is the pivotal 5-to-4 Bush v. Gore decision that decided the presidential election for George W. Bush in 2000. (In an entertaining aside he told the audience, “I may be the biggest Gore v Bush junkie in the world.” He remembered saying the same thing to Al Gore who replied, ‘you may be the second.’”)
But what was the difference on the Court after Bush v Gore? “I submit it was Justice O’Connor.”
Toobin described O’Connor’s transition from conservative to centrist as a product of her increasing “alienation” from the Republican Party. He attributed her shift to several factors including the highly publicized and politicized case of Terry Schiavo, the incapacitated Florida woman whose husband and parents battled for control over the right to make medical decisions for her.
Toobin said the unhappy confluence of the Schiavo case and the fierce partisan Republican politics that surrounded it, as well as O’Connor’s husband’s progressive Alzheimer’s disease, led her to resign. After the failed choice of Harriet Miers, President Bush successfully appointed the conservative Samuel Alito to Justice O’Connor’s swing vote seat, gaining one more for the Bush administration.
Toobin closed with, “The question is who is going to get to appoint justices to the Supreme Court. And we’ll know in a week.”
Toobin answered questions from professors Jamal Greene, Trevor Morrison and Theodore Shaw. Professor Suzanne Goldberg asked him to foresee the kind of cases to expect the Court to take. “Conservatives are very aggressive,” he said. “They’ll be looking for cases to overturn affirmative action and Roe.” He said they would be “looking to shut down a lot of plaintiff legislation.”
Adrienne McCall, a first-year student and native of Florida, said after the lecture, “It made me want to go home and send in my absentee ballot!”
Many members of Professor Maurice Rosenberg’s family attended the eponymous lecture: the professor’s widow, Gloria Rosenberg, his sons David and Richard Rosenberg, daughter-in-law Kim Ward and grandson Jason Rosenberg.
Toobin is the first journalist to deliver the Rosenberg Lecture. Past lecturers are Hon. Jack B. Weinstein ’48, Hon. Rosemary Barkett, Hon. J. Harvie Wilkinson III, Eliot Spitzer, Justice Stephen Breyer, Senator Joseph R. Biden Jr., Hon. Judith S. Kaye, Justice Ruth Bader Ginsburg ’59, Justice Antonin Scalia and Justice Anthony M. Kennedy.
The Maurice Rosenberg Memorial Lecture Series, established in 1996, honors Columbia Law School alumnus and Professor Maurice Rosenberg. A renowned advocate for judicial reforms on the state and federal levels, Rosenberg was a specialist in civil procedure and conflict of laws who co-authored the definitive casebooks on those subjects. Rosenberg served in such official appointments as head of the Advisory Council on Appellate Justice, Special Assistant to the U.S. Attorney General, assistant attorney general in charge of the Office for Improvements in the Administration of Justice (appointed by President Carter), and member of the Federal Advisory Committee on Rules of Civil Procedure (appointed by Chief Justice Warren Burger). 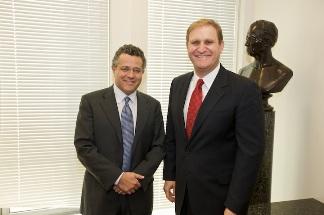 Columbia Law School, founded in 1858, stands at the forefront of legal education and of the law in a global society. Columbia Law School joins traditional strengths in International and comparative law, constitutional law, administrative law, business law and human rights law with pioneering work in the areas of intellectual property, digital technology, sexuality and gender, and criminal law.