An expert in intellectual property and legal theory, Balganesh addresses debates in creativity and innovation from the “monkey selfie” to protecting privacy through copyright. 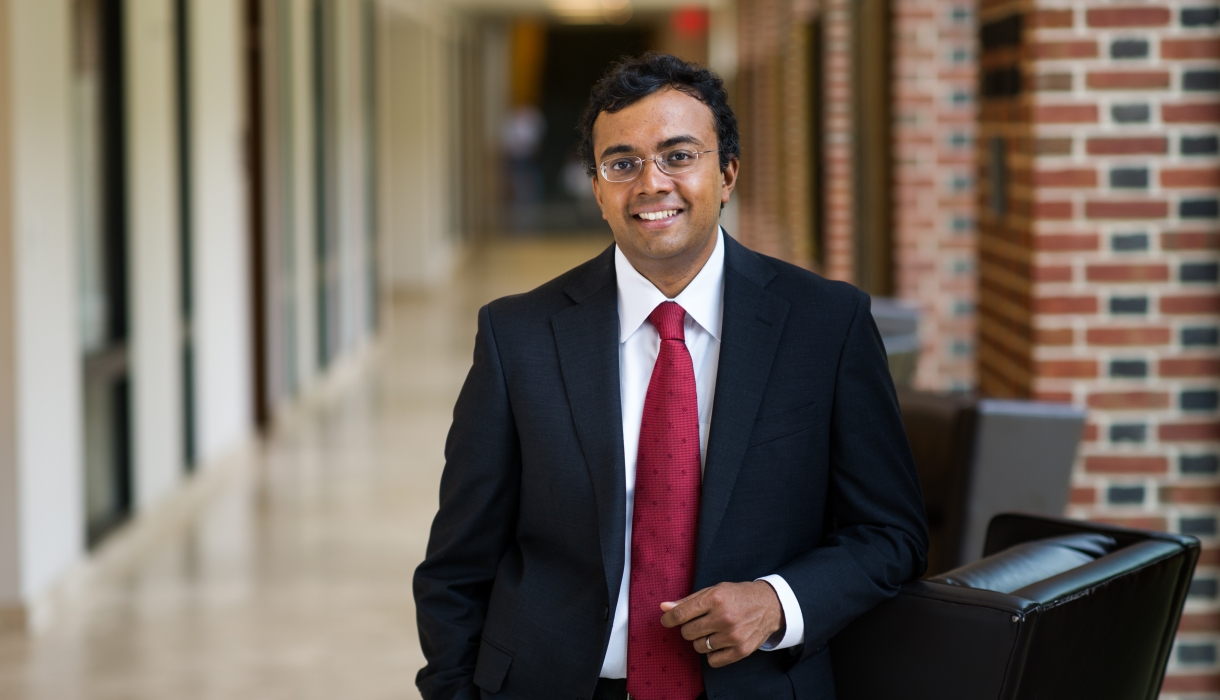 Some advice for the students who take Shyamkrishna Balganesh’s introductory intellectual property class in the fall: When you get cold-called, a wrong answer is actually OK.

“The only unacceptable answer is, ‘I don’t know,’” says Balganesh, an intellectual property scholar who joined the Columbia Law School faculty on January 1. “‘I don’t know’ symbolizes to me, ‘I don’t want to think.’”

He isn’t trotting out the “no-wrong-answers” cliché. “You can get it wrong. You can misquote the section, or you could choose the wrong section. But within the realm of ‘right’ there are probably a hundred different permutations,” he says. “I want everyone to appreciate that there is no single right answer in the law.”

Balganesh returns to Columbia as a professor of law after spending fall 2019 as Samuel Rubin Visiting Professor of Law. What drew him back are not just the “superstars” in property and intellectual property already teaching here, he says, but the Law School faculty’s commitment to “the unity of the legal discourse”—the idea that all areas of law are equally relevant to scholarly discussion and a “real belief that we’re engaged in a common enterprise called legal scholarship.”

His intellectual property scholarship often touches on other areas of law—torts, contracts, legal theory, property law, jurisprudence—so being able to engage with faculty across disciplines is important to Balganesh. “One of the things that’s critical for me is to be in constant conversation . . . and with everyone agreeing about the relevance of what everyone else is doing,” he says. “Historically, Columbia has always had that culture. And over the years it has really managed to retain that, which is what makes the Law School unique.”

Balganesh made up his mind to become a lawyer around age 8, thanks, he says, to a combination of L.A. Law and Perry Mason reruns. He bought a book on torts when he was 10. But his eventual specialty—intellectual property—was literally dinner table conversation while he was growing up. His parents, microbiologists who work on drug discovery, moved his family from Berlin to India in the mid-1980s as India’s market liberalization efforts spurred pharmaceutical development.

Balganesh went on to the National Law School of India University, a Rhodes Scholarship at Oxford, and Yale Law School, where he met his wife, Irene Lu, then a graduate student at the university. He clerked for the Supreme Court of India and held a Bigelow Fellowship at the University of Chicago. (Along the way, he set aside a budding career in competitive table tennis; he has already given his 2½-year-old son, Marky, a paddle.)

“Old ideas grow more and more relevant as new technologies emerge,” he says. “The process of fitting and adapting the old world to the new is what excites me.”

A summer associateship at a New York law firm made clear to him his heart lay in legal academia, when despite the excitement of working on a patent case at trial, he found himself wanting to pursue legal research that went far beyond the demands of the case. “I began realizing that writing and researching were more exciting than practicing,” he says. “‘There’s a difference between the bloodsport of the law and the magic of the law,’” he says, quoting the advice of one of the firm’s partners. “It’s the magic of the law that captivated me.”

What makes intellectual property law fascinating, Balganesh says, is that the field is constantly evolving as technology changes, but its core principles remain relevant. “Law and technology is an area that literally is rewritten pretty much every year and a half, and intellectual property and copyright law within that,” he says. “New kinds of creativity, new conceptions of art, the growth of artificial intelligence—there’s always a new and interesting challenge.”

If a work of art is created by, for instance, a robot programmed with artificial intelligence or by an animal, as in the 2018 case involving a selfie taken by a monkey, where does authorship and copyright lie? “The same question emerged in the early 20th century with photography,” which mechanized image-making, Balganesh says. “What amount of human involvement do we want for the purposes of our concept of authorship?” The answer to that question lies in the age-old but hidden requirement of “authorial causation,” he argued in “Causing Copyright,” which proposed a two-step process to determine when and why human behavior can be treated as producing authorship by copyright.

“Old ideas grow more and more relevant as new technologies emerge,” he says. “That process of fitting and adapting the old world to the new is what excites me. That process of reinvention of this field is really a kind of metamorphosis. At the end of the day, it keeps the same genetic code.”

For the past few years, Balganesh has been a coauthor on multiple sections of the leading copyright law treatise Nimmer on Copyright, which is the federal judiciary’s go-to source for the subject. “Bringing the past, present, and future together in the field is, to me, the most enjoyable part of the treatise enterprise.”

His most recent work, “Legal Internalism in Modern Histories of Copyright,” expands on this historical view of copyright: In a paper to be published in Harvard Law Review and co-written by Yale Law Professor Taisu Zhang, he focuses on what he calls “legal internalism” in the history of copyright. Although copyright history can be analyzed through the lens of economic and cultural history, he says, the people involved in copyright law view it as a self-contained, coherent system with clear boundaries. “The fact that it is law and that its participants are only allowed to use a finite number of arguments and sources and forms of reasoning plays a role in the way in which it develops,” he says. Essentially, the participants act like lawyers, he says, and, for good or ill, that must be acknowledged.

The “legal internalism” framework is “a pushback against the belief that only external variables, such as cultural factors, social factors, political factors, or economic factors influence the growth of a legal area,” Balganesh says.

He plans to examine the idea of legal internalism in future papers. “It may all peter out as these things go,” he says. “But it’s always fun when you are waking up in the middle of the night and want to write down a paragraph or two that captures what you’re thinking.”