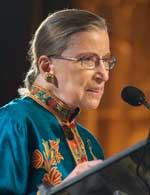 November 7, 2008 (NEW YORK) –Supreme Court Justice Ruth Bader Ginsburg, 75, who graduated from Columbia Law School in 1959 and later became its first tenured female professor, intends to stay on the Court until at least the age of 83.

She made the announcement before more than 1,200 alumni, faculty, students and friends on Saturday, October 25, as Columbia Law School celebrated its 150th anniversary at the Sesquicentennial Gala, hosted by Ginsburg and Dean David M. Schizer at Cipriani 42nd Street in Manhattan.

“Appointed at age 60 in 1993, I will not match Justice [William O.] Douglas’ long tenure on the court. But I take heart from the example of the Justice that Douglas admired most, Louis D. Brandeis,” Ginsburg said. Also appointed at age 60, Brandeis served until age 83. “My hope and expectation is to hold my office at least that long,” Ginsburg said to cheers and applause.

Guests shared an evening of cocktails – including Cipriani’s signature Bellini – hors d’oeuvres and dancing to a live band beneath the 65-foot ceilings of the Italian Renaissance-style Bowery Savings Bank building. Conviviality, soul music classics and their common experience brought together generations of Columbians, from the Classes of 1941 to 2008 to present students.

That night alumnus Michael Cardozo ’66, New York City Corporation Counsel, read from the Proclamation: “Columbia Law School has done as much as anyone to ensure that the pillar of law upholds our society, and today, we are proud to celebrate Columbia Law’s 150th Anniversary.”

The gala was the culmination of a year of Sesquicentennial celebrations that began in January with events in Hong Kong, Shanghai, Beijing and Tokyo, followed by the annual Winter Luncheon at the Waldorf Astoria Hotel. It honored the Law School’s six living deans, alumni who are serving as judges, and alumnus H.F. “Gerry” Lenfest, entrepreneur, philanthropist and Dean’s Council member. The final January event was a dinner in the Great Hall at the Supreme Court in Washington, D.C. hosted by Justice Ginsburg.

In honor of Columbia’s proud tradition of government service, a dinner at the Morgan Library & Museum in February celebrated alumni on all levels of the judiciary — from clerk to Supreme Court Justice. In October, the Law School awarded posthumous juris doctors to Presidents Theodore and Franklin Delano Roosevelt, who both attended Columbia Law School but departed early to begin their political careers, never receiving their LL.D.s.

Alumni events took place throughout spring and summer in New York, San Francisco, Los Angeles, Paris and Tel Aviv, where the Law School co-hosted with the Anti-Defamation League the “From Ivy to Olives Academic Symposium in Israel.” In October, Columbia Law School held a Global Reunion in London that featured a symposium of 10 professors and a keynote address by Lord Patten of Barnes, the 28th and last governor of Hong Kong and currently Chancellor of Newcastle University and the University of Oxford. The Cipriani gala was the final Sesquicentennial celebration.

“Columbia Law School is one of the institutions that I really care about,” said gala attendee John Saroff ’04, who also holds a business degree. “I had great professors at the Law School, and I made great friends.”

Among those friends at the gala was Michael Bogner ’05, who is also Saroff’s current business partner. The two, who first met at summer camp and then roomed together during Law School, are co-producers of the film The Crusaders, based on the book Crusaders in the Courts by Professor Jack Greenberg ’48 about his historic role in Brown v. Board of Education to desegregate public schools. Later in his career, Greenberg was a member of human rights missions to South Africa.

Professor Greenberg also played a memorable part in the Law School experience of gala attendee Mina Song ’97, who took Civil Procedure with him. She recalled a dinner Greenberg hosted for his students at his apartment featuring beef stew with olives, whose recipe came courtesy of Bishop Desmond Tutu, she said.

Alumnus Clarence Olmstead ’68 and his wife, Kathleen Heenan, attended the gala and were especially excited to hear Justice Ginsburg speak. “I really admire her work on Title VII, all that she did to ensure women could get equal pay,” Heenan said.

Current student leaders joined in the festivities with their alumni peers and got a glimpse of their future.
“I am humbled and honored to be in this room and to be a part of this tradition,” said Bethany Jenkins ’10, head of the Transfer and Visiting Student Organization. “This event is the kind of opportunity only Columbia affords – you can’t miss it.”