The former teacher and political candidate will use his skills in public service. 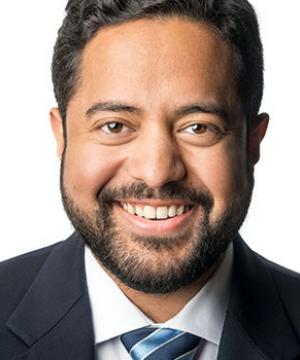 Samir Paul ’21, a teacher and political organizer, has received a Paul & Daisy Soros Fellowship for New Americans, one of 30 graduate scholarships the trust awards nationwide for immigrants or children of immigrants.

The Soros Fellowship winners are chosen from a field of nearly 1,800 applicants based on “creativity, originality, initiative, and sustained accomplishment” and their potential for future “distinctive contributions” to society, culture, or their field, according to the Soros Foundation. Fellows receive up to $90,000 for graduate study. Paul becomes one of 50 Soros Fellows who have studied at Columbia University since the program began in 1998.

Paul’s parents immigrated from India as students in the 1980s. His father is an engineer; his mother, who studied medicine and educational psychology, owned a coffee shop in the Georgetown neighborhood of Washington, where she “worked herself to the bone” and Paul spent plenty of time either minding the register or “reading in the back room,” he says.

“My story is so bound up in their immigrant story,” Paul says, that his fellowship “is a vindication not just of my work but their work as well.”

Paul calls himself a “generalist,” and his résumé reinforces that assertion: After graduating from Harvard University in 2010, he joined Teach for America as a math and computer science instructor in a public high school in Washington, he earned a master’s degree in teaching from American University, organized for the 2012 Obama campaign in Wisconsin, and worked as a consultant for IBM. When he returned to teaching at his old high school in Silver Spring, Maryland, Paul helped organize within his local teachers union and started an after-school accelerated math program for low-income grade school girls. In 2017, the National Education Association named him one of its “30 Under 30” educators. Last year, Paul ran in the Democratic primary for a seat in the Maryland House of Delegates. He lost by 12 votes out of more than 56,000 cast.

It was a tough loss, he says, but he was a long-shot candidate who went a long way. Of an entire year spent going door to door to meet voters, from the minute he finished teaching until dark, “I can think of 20 nights where I stopped knocking on doors at 8:15 instead of 8:30. That tiny margin of time made a difference,’’ he says. “But the core of it is that I was never supposed to win that race.”

Paul’s varied experiences have helped him build a “toolbox” for future government service. Columbia Law, he says, is teaching him “to be able to think about some of these really important policy questions in a detailed and methodical way that lawyers are trained to think.” This summer he will build on his teaching experience as an educational consultant with the Columbia Law School Center for Public Research and Leadership, which undertakes consulting projects for public and charter schools.

“This fellowship celebrates immigrant excellence, and I think that’s really important, particularly in the cultural moment that we’re we’re living through,” he says. “But I also think it’s really important to acknowledge that this vision of excellence and opportunity is not specific just to immigrants. It’s one that we want to expand to everybody. And so that that’s a really important aspect for me.”

Paul credits Professor Bert I. Huang, a 2002 Soros Fellow and the Michael I. Sovern Professor of Law, who convinced him he was a competitive applicant, read his essays, and even sent him an encouraging email on the morning of his interview.

“When I was a teacher I really prided myself on being able to identify things in my students that maybe they didn’t always see in themselves. That’s a very powerful thing for a teacher to inject in a young person’s life,’’ Paul says. “It had been many years since someone had done that for me, and Professor Huang did. I’ll just always be grateful in a really deep way.”