Associate Professor Maeve Glass will teach a new seminar on the legal history of American slavery. 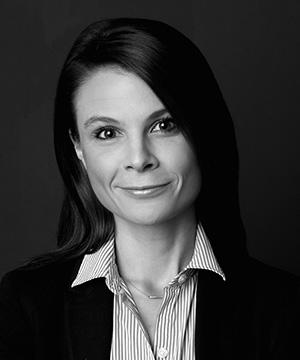 When Maeve Glass looks at the text of the U.S. Constitution, she sees the remnants of a vibrant legal culture and a bustling political economy that has remained hidden from view for centuries. A legal historian trained in colonial Latin America and Native American history, Glass has spent the past decade uncovering this veiled world. Using a pioneering model of inquiry to dig beneath the standard map of America’s 13 separate colonies, Glass has excavated an ancient commercial space along the North Atlantic coast that provided the legal and conceptual foundations for a constitutional union. “As surprising as it may seem,” Glass says, “when Americans first celebrated the Constitution, they choose to represent the sacred document as the 18th-century equivalent of a freight truck.”

Glass, who joined the faculty as an associate professor this summer, completed her J.D. at Columbia in 2009 before earning her Ph.D. in history at Princeton. She also has held legal history fellowships at Harvard Law School and New York University School of Law, where she completed her archival and doctoral work. Her dissertation, "These United States: A History of the Fracturing of America," won the American Society for Legal History’s best dissertation prize in 2017 and is the basis for her forthcoming book on the origins and evolution of the U.S. Constitution.

“Maeve is a rising star in the field of American legal history, and she joins a growing cohort of innovative scholars in an area that has deep roots in the Law School’s history and ever more relevance today,” says Gillian Lester, Dean and the Lucy G. Moses Professor of Law. “As both a J.D. graduate and an academic fellow at Columbia, it is especially gratifying to have her join the faculty.” 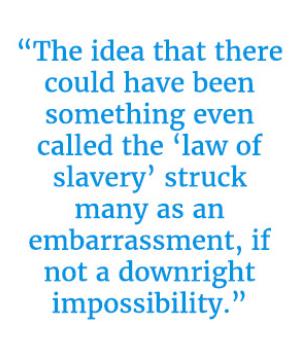 As one of five new faculty members hired by Dean Lester in 2018, Glass is excited to bring her interdisciplinary approach to the classroom, where she will help law students examine some of America’s most urgent problems and injustices from novel perspectives. This fall, she will be teaching the new seminar The Legal History of American Slavery. “Until the 1970s, lawyers avoided talking about the law of slavery,” she says. “The idea that there could have been something even called the ‘law of slavery’ struck many as an embarrassment, if not a downright impossibility. And yet, as we now know from decades of research, the law was crucial to the creation not only of slavery as a thriving institution and the bedrock of the national economy but also of the ideology of white supremacy that continued long after the 13th Amendment formally abolished slavery.”

In the legal history seminar, students will examine this body of “slave law” from a wide range of perspectives, including critical race theory, gender studies, law and economics, and social history. As part of the curriculum, students also will investigate important case studies of state-level resistance to federal law, says Glass, whose award-winning history of state citizenship as an antislavery strategy recently appeared in the University of Chicago Law Review.

Glass hopes that students will use the seminar as a means of advancing their career aspirations, whether as social justice lawyers, public servants, or legal scholars. “The goal is for students to develop the tools and judgment needed to think through complex problems, as well as effectively communicate their views and have conversations about tough topics,” says Glass, who is asking students to produce a seminar project in a genre of their choosing, such as a law review note, policy memo, or amicus brief.

Glass developed her individualized pedagogical approach as a tutor at Princeton’s Writing Center. “Working one-on-one with students who came to the Writing Center gave me a rare window into what happens after class ends and students are left to make sense of the reading material and course assignments,” she says. “It’s not enough to assume the learning process can be confined to the four walls of the lecture hall or the seminar room or the last minute frenzy of reading period,” she adds, explaining that she will ask students in the seminar to submit proposals and drafts of their projects throughout the semester, as well as to reflect on their goals and progress. “My aim is to help students figure out what it is they hope to get out of law school, what it is they hope to get out of a course and then work backward from their goals to figure out how to meet their needs.” 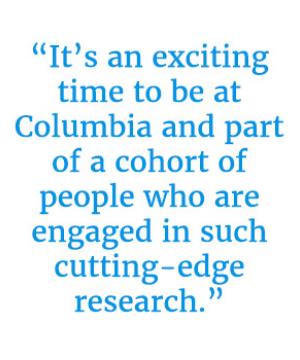 In the spring, Glass will teach Property to first-year students. “Property is a historic institution that has structured the allocation of resources and the distribution of wealth and power in ways that have had enduring consequences for society today,” she says. “The doctrines that we’re teaching have evolved over the centuries, but some of the rules are part and parcel inherited intact. One of the questions to ask is, ‘How and why is it that those rules have remained so relatively stable?’”

As a scholar, Glass is excited to help facilitate new conversations not only in the classroom but also across departments. As an academic fellow, she conceived of the idea for an interdisciplinary workshop that brought together graduate students and professors from across the university. Entitled “Law and Its History: A Workshop on Methods,” the 2017 workshop helped jumpstart the revival of an interdisciplinary legal history reading group. “It’s an exciting time to be at Columbia and part of a cohort of people who are engaged in such cutting-edge research,” she says. 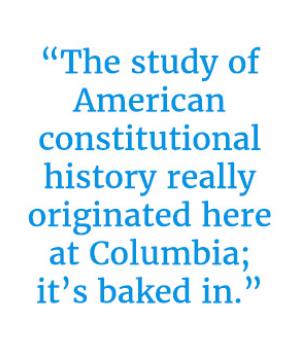 Glass, who served as a contributing writer to the Princeton and Slavery Project, also has taken advantage of the Columbia University archives to understand better the role that Columbia Law School played in the intertwined legacies of constitutional history and American slavery. She has focused in particular on the writings of the 19th-century Columbia Law Professor John Burgess, the son of a prosperous Tennessee slaveowner. Considered one of the fathers of American political science, Burgess helped forge the racist underpinnings of early histories of Reconstruction. “He borrowed theories of German nationality, history, and race, and he mapped it onto American history in ways that continue to shape how people talk about constitutional history today,” she says. “The study of American constitutional history really originated here at Columbia; it’s baked in.”

Glass is proud to be part of the ongoing effort to move beyond these frameworks of study that are now over a century old and believes that the study of legal history is as important as ever. “One of my favorite quotes is from James Baldwin, who reminds us that history ‘is not merely something to be read,’ much less something that belongs only to the past, but to the contrary, that ‘the great force of history comes from the fact that we carry it within us.’”