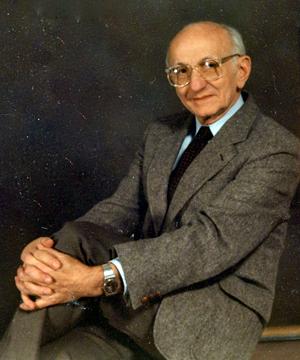 Henkin, University Professor Emeritus at Columbia Law School, was among the first and most forceful advocates of using the lens of the law to focus on a nation’s obligations to safeguard the equality and dignity of its citizens.

“Lou was a towering figure here at the Law School, and his intellectual and personal contributions were immense,” said David M. Schizer, Dean and the Lucy G. Moses Professor of Law. “Lou’s pathbreaking work in constitutional and international law has influenced generations of leading jurists and advocates all over the world.”

A prolific scholar, Henkin’s numerous books, articles, and amicus briefs are cited in hundreds of federal and state court opinions. In 1993, a federal appellate judge referred to him as the “preeminent constitutional scholar in the area of international law.”

Those sentiments were shared by U.S. Supreme Court Justice Ruth Bader Ginsburg ’59, who said she was “powerfully influenced” by Henkin. In a 2006 tribute to mark the 50th anniversary of Henkin’s affiliation with Columbia University, she called him a “cherished friend.”

“Countless times, when struggling with a trying case involving a question of constitutional law or international law, I looked to his writings for counsel,” wrote Ginsburg, who taught with Henkin on the Law School faculty from 1972 to 1980. “Lou’s writings sometimes clarified what the law really is, but other times lucidly developed what the law ought to be.”   Henkin was known for his abiding and unwavering drive to ensure that there was a framework to protect the integrity and dignity of individuals. He advocated universal human rights and made it clear that his views had no borders.

Henkin was often critical of the U.S. for its failure to sign many international human rights covenants—a fact he found particularly troubling given that the U.S. had defined many rights dating back to the Declaration of Independence.

In his book How Nations Behave, Henkin noted that “almost all nations observe almost all principles of international law and almost all of their obligations almost all the time.” Harold Koh, now the legal adviser to the State Department, described Henkin’s words as the “sentence that launched a thousand articles.”

The youngest of six children, Eliezer Henkin was born on Nov. 11, 1917, in what is now Belarus. The son of a well-known rabbi and religious scholar, he fled with his family six years later as the treatment of Jews there worsened. A vice principal at his Hebrew school on the Lower East Side had no regard for Henkin’s nickname, Lazar, and started calling him “Louie.” Louie became Louis, and, by the time he entered Yeshiva University in 1933, the name had stuck.

Henkin was a good student, though he found himself studying advanced algebra more than the Talmud. One day he saw his roommate filling out an application for Harvard Law School. Intrigued, he followed suit. Henkin was admitted in 1937 and served as an editor for the Harvard Law Review.

After graduating in 1940, Henkin clerked for legendary federal appellate Judge Learned Hand. The following year, Hand asked Henkin if he would like to clerk for U.S. Supreme Court Justice Felix Frankfurter. “And that, itself, was the application,” Henkin recalled in 2006.

Between clerkships, Henkin spent four years in the Army during World War II. While serving in an artillery observation unit during the invasion of France, Henkin and 12 other U.S. soldiers came upon three German officers. Speaking Yiddish to the officers, Henkin paved the way for negotiations with their commander that ultimately led to the surrender of 75 Germans to the 13 Americans. For his efforts, Henkin was awarded the Silver Star.

After working for Frankfurter, Henkin spent five years at the State Department in the Office of Regional Affairs, a predecessor to NATO. The office was also involved with the nascent United Nations, where Henkin later served as a consultant and began his career in international law.

However, after several years at the U.N., Henkin once again felt drawn to the classroom. “I had often thought I’d be an academic because being an academic is in my blood,” he told an interviewer in 2008.

Henkin first came to Columbia in 1956. At the recommendation of Professor Philip Jessup ’24, he directed a disarmament project for the Legislative Drafting Research Fund. His work led to his first published work, Arms Control and Inspection in American Law. Henkin then taught for five years at the University of Pennsylvania before coming to Columbia Law School in 1962. At the Law School, he served as the Harlan Fiske Stone Professor of Constitutional Law, while also teaching international law and foreign affairs to graduate political science students. This came at a time when interdisciplinary education was still a rarity. Henkin was named University Professor in 1981.

As Henkin shaped and defined human rights education, he burnished his reputation with influential and provocative books such as How Nations Behave (1968), Foreign Affairs and the U.S. Constitution (1975), and The Age of Rights(1989). Henkin also co-edited human rights and international law casebooks with other Law School faculty that are still in wide use.

In addition, Henkin took on the difficult task of chief reporter—and de facto referee for discussions between high-powered lawyers and academics—for the Restatement (Third) of Foreign Relations Law of the United States, which was released in 1987. The restatement has been cited in hundreds of federal court opinions, and has been widely influential in helping U.S. courts determine which international human rights laws can be enforced domestically.

In 1978, Henkin also co-founded what is now the Institute for the Study of Human Rights at Columbia University. Two decades later, he launched the Law School’s Human Rights Institute with former professor Catherine Powell. Powell has said that working with Henkin was “how a musician must have felt performing with Mozart.” The institute is currently co-directed by Peter Rosenblum, the Lieff, Cabraser, Heimann & Bernstein Clinical Professor in Human Rights, and Sarah Cleveland, the Louis Henkin Professor of Human and Constitutional Rights, a chair created in 1999.   Cleveland, now on leave as Counselor on International Law to the State Department, said in a 2007 interview that Henkin’s scholarship “pushed back forcefully against the Roman observation that in war—and perhaps in foreign relations generally—the law is silent. The law, he said . . . speaks clearly and distinctly in this area, and is equally enforceable.”

Henkin is survived by his wife, Alice, who is also a noted human rights lawyer; three sons, Joshua, David, and Daniel; and their families. Funeral services will be held Sunday at Riverside Memorial Chapel, 180 West 76th St., at 11:45 a.m.