September 29, 2008 (NEW YORK) –  A panel of Columbia Law School faculty members who formerly worked as attorneys for the federal government talked about their employment with humor and insight for an audience of current law students on Tuesday, Sept. 23. The discussion, “Making a Difference,” was co-sponsored by the Law School’s Social Justice Initiatives program and the Center for Public Interest Law. 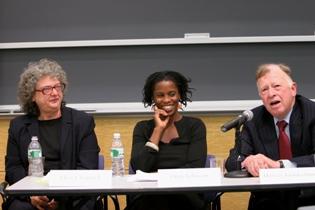 “Most faculty that have worked in government think it’s the best thing they’ve ever done,” said Ellen Chapnick, moderator and Dean for Social Justice Initiatives. At least 30 full-time professors and 70 adjunct lecturers-in-law have previous government consulting experience or have held government positions. This number does not include current Columbia Law faculty that have completed judicial clerkships at either the federal or state level before entering private practice or teaching.

The possible change from litigation to assisting in drafting legislation gave Johnson pause before taking the position with Kennedy back in 2001. “I was reluctant to work in government because I saw myself as an advocate, but I couldn’t have been more wrong,” said Johnson. Her work with the committee actually did directly impact individuals’ lives, as she dealt with issues involving judicial nominations, freedom of expression and religion, and sexual orientation.

“You wake up each morning and say, “How can I make this a little better?” said Professor Harvey Goldschmid, former head of the U.S. Securities and Exchange Commission.   “(Government work) is something quite special, and it has to be special because the money won’t tempt you,” Goldschmid added. Goldschmid initially went to the Washington D.C. office of the SEC as general counsel in 1998, 28 years into his teaching career at Columbia Law School.

Lecturer-in-law Diane Houk (below) litigated housing discrimination cases while a civil rights attorney in a Midwest private practice when she left to join the Housing Section of the U.S. Department of Justice in Washington, D.C., for 13 years. Houk believes that working at the DOJ gives attorneys early in their careers “a lot of unexpected opportunities and a lot of responsibilities from a young age.” 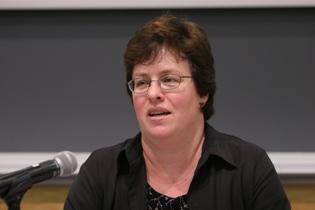 “My route to government was driven by intellectual interest,” said Professor Matthew Waxman. Waxman’s career included working in a DOJ unit that hunted Nazis, a U.S. Supreme Court clerkship with Justice David Souter and senior advisory positions at the National Security Counsel, U.S. State and Defense Departments. Since graduating from Yale Law School nine years ago, Waxman has already pondered major questions of the day such as the appropriateness of shooting down hijacked commercial airliners and prisoner treatment at Abu Gharib. 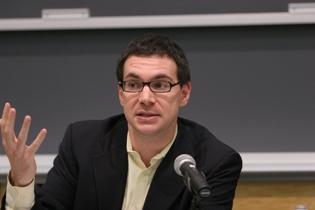 “People ask me if I’m bored right now,” Waxman (above) said. “This is my favorite job, but I wouldn’t trade those [experiences] away,” he added.

The panel also discussed balancing work/life issues as a government attorney. Waxman sees family friendliness issues as job-specific, while Houk sees litigation positions as antithetical with managing a home life. Goldschmid believes the federal government is “coming along on work family issues,” and Johnson views some Capitol Hill jobs as compatible with having a personal life. She, however, did not find that to be the case while working for the judiciary committee.

“Sarah Palin does have five kids, but I couldn’t conceive of doing my job (with Sen. Kennedy) with kids,” Johnson said to the laughter of some audience members.

Law student Steven Wu ’10 found the panel quite instructive. “I think they offered a lot of information, and to get it in one source in such a short period of time was great. It would have taken a lot of research (to get this amount of information),” said Wu.

Megan Crowley ’10 worked at the U.S. House of Representatives Judiciary Committee after her first year of law school and is currently considering private practice opportunities for next summer. “There is so much rumor generation among law students about careers, about doors opening and closing, that it was good to be notified of professors who can be contacted at future points [for advice],” said Crowley.