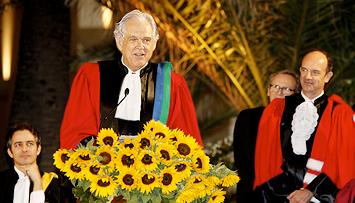 Thomas Clay, dean of the University of Versailles Faculty of Law and Political Science, bestowed the doctor honoris causa degree on Bermann at a ceremony held at the Château of Versailles. 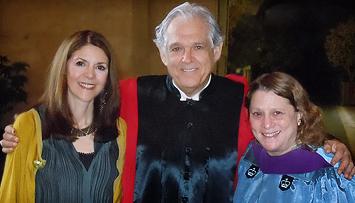 Jane Ginsburg, Columbia Law School colleague and leading international expert on intellectual property (who earned a Doctor of Law from the Université de Paris II), attended the honors and marched with the faculty during the ceremony. Bermann’s wife Sandra, professor and former chair of the department of comparative literature and Master of Whitman College at Princeton University, was also present for the festivities.

"It was a privilege to attend the sumptuous ceremony for George's well-deserved honorary degree from the University of Versailles-St Quentin," said Ginsburg. "He was resplendent in his crimson and ermine-trimmed doctoral regalia; his acceptance speech, in perfect French, amply displayed the scientific and personal qualities that led the university to honor him."

The Faculty of Law and Political Science at the University of Versailles focuses on four main courses of study: private law, public law, history of law, and political science. It partners regularly with the Versailles Court of Appeal, the Versailles Bar, the Saint-Quentin-en-Yvelines Municipal Committee, and the Versailles Administrative Court. Through its Institute of Legal Studies, the university offers students a preparatory course for the entrance examination administered by the Versailles Regional Bar School and for entrance to the National School of Magistracy. 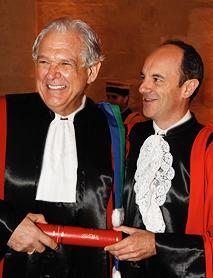 A world-renowned expert in international and comparative law, as well as EU law and the law of international arbitration, Bermann joined the Law School faculty in 1975, after receiving a J.D. from Yale Law School and an LL.M. from Columbia Law School, and practicing law at the firm of Davis Polk & Wardwell in New York. He is currently affiliated professor at the École de Droit, Institut des Sciences Politiques (also known as Sciences Po), in Paris, as well as at Collège d’Europe, Bruges, Belgium. His writing has been cited by foreign courts as well as domestic state and federal courts, including by the U.S. Supreme Court in United States v. Morrison.

Columbia Law School, founded in 1858, stands at the forefront of legal education and of the law in a global society. Columbia Law School joins traditional strengths in international and comparative law, constitutional law, administrative law, business law and human rights law with pioneering work in the areas of intellectual property, digital technology, sexuality and gender, criminal, and environmental law.