Problems at the Borders: The Difficulties of Protecting International Public Goods

Problems at the Borders: The Difficulties of Protecting International Public Goods

The difficulty in protecting so-called international public goods, such as an efficient world trade system and limiting the effects of climate change, is due in part to nations’ self-interest and myriad regulatory challenges, according to a leading international lawyer.

However, Ernst-Ulrich Petersmann, who was recently a visiting professor at Columbia Law School, cautioned that the failure of governments to protect international public goods can also endanger the interests of individual nations. 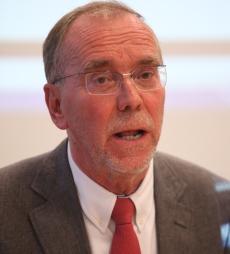 “The protection of international public goods is the most challenging policy problem and legal problem of the 21st century,” Petersmann said during a talk last month at William and June Warren Hall sponsored by the European Legal Studies Center.
Petersmann, who has published more than 25 books and 200 articles on international and European law, was most recently a professor at the European University Institute.
Petersmann is currently at work on a paper called “International Economic Law and ‘Public Reason: Why Do Governments Fail to Protect International Goods More Effectively?” He summarized his preliminary findings during the talk, after which Katharina Pistor, the Michael I. Sovern Professor of Law; and Petros Mavroidis, the Edwin B. Parker Professor of Foreign and Comparative Law, provided commentary.
In the paper, Petersmann notes “the neglect for ‘international public goods’ in intergovernmental cooperation is also due to the fact that most states continue using international law as an instrument for advancing national interests rather than international public goods.”
At the same time, though, Petersmann believes European Union member states have ceded certain sovereign rights to the EU, and have been able to convince their residents of the benefits of going in that direction.