Petros C. Mavroidis joined the faculty in 2003. He served as a member of the World Trade Organization (WTO) legal affairs division from 1992 to 1995 and has been a legal adviser to the WTO since 1996. He was the chief co-rapporteur for the American Law Institute study “Principles of International Trade: The WTO” (2013).

Mavroidis has written 10 books and scores of peer-reviewed journal articles and book chapters. His book The Regulation of International Trade won the 2017 Certificate of Merit in International Law for a distinguished contribution to the field from the Executive Council of the American Society of International Law. The two-volume tome is a meticulous exploration of WTO agreements regulating trade in goods. The third volume of the series, dealing with Trade in Services, was published by MIT Press in 2020.

Among his many affiliations, Mavroidis is a member of the American Law Institute, American Arbitration Association, and the Swiss Institute of Comparative Law. 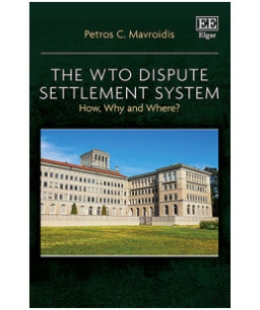 This incisive book provides a comprehensive overview of the WTO dispute settlement practice from 1995 up until the present day, illustrating the need for it to be resurrected from its current state of crisis.

By inquiring into the current set-up of WTO adjudication system, the book explores to what extent its original intent has been followed in practice. Its empirical analysis of decades of data regarding the number, duration, and subject matter of dispute adjudications, as well as the frequency of implemented or non-implemented settlements, illuminates the effectiveness of the system and highlights the issues that have led to the WTO’s present predicament. Petros C. Mavroidis employs these findings to build a case for the urgent reform of the WTO dispute settlement system by virtue of its accomplishments. He then concludes with a proposal for a reinvigorated ‘Dispute Settlement Understanding 2.0’.

The WTO Dispute Settlement System will prove an essential read for students and scholars of WTO law, as well as lawyers, political scientists, and policy-oriented economists interested in the WTO dispute settlement system. Its accessible evaluation of the rationale and practice of key provisions of the adjudication regime will also be of benefit to practicing attorneys. 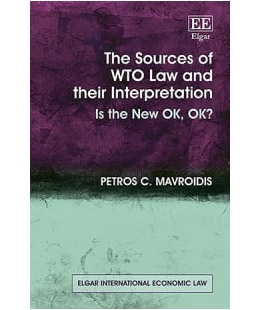 The Sources of WTO Law and their Interpretation

In this incisive book, Petros C. Mavroidis examines the complex practice of interpreting the various sources of World Trade Organization (WTO) law. Written by a leading expert in WTO scholarship, the book serves as a broad grounding in the legal theory of the WTO contract and its sources, as well as its application in practice.

Delving into the workings of the Vienna Convention of the Law of Treaties (VCLT) and its use within the WTO courts, the author provides a critical assessment of the interpretation of the WTO contract and illuminates the role of WTO adjudicators and the Secretariat in clarifying obligations. Mavroidis then explores the uncertainty and distortion that emerge as a result of the discretion from adjudicators invited by the VCLT, explaining why this matters and offering steps towards resolving these issues.

Providing an expansive analysis of the interpretation of WTO treaties, this book will be an invaluable resource for scholars and students in the field of WTO law, as well as international trade and economic law more broadly. Its discussion of the possible future of dispute settlement, particularly its proposal for a re-evaluation of the judicial selection process, will also prove insightful to practitioners in this area.

In the final episode of Columbia Law’s limited podcast series, hosted by Professor Eric Talley, Professors Anu Bradford and Petros Mavroidis discuss the effects of the pandemic on global trade and whether the World Trade Organization and the European Union can handle political upheavals exacerbated by the health crisis, Brexit, and the U.S.-China trade war.

| The Diplomat Magazine
In The Media

| Financial Times
In The Media