At a ceremony emceed by George Will, Philip Hamburger, the Maurice and Hilda Friedman Professor of Law, was awarded the Bradley Prize, which comes with a $250,000 stipend. 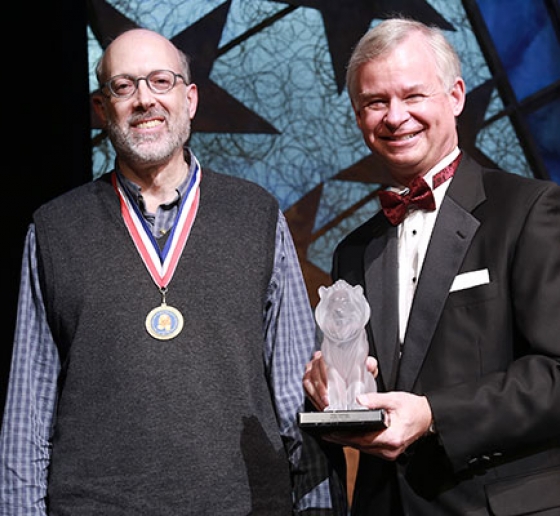 On April 6, in Washington, D.C., Philip Hamburger, the Maurice and Hilda Friedman Professor of Law, received the prestigious Bradley Prize that carries an unrestricted $250,000 stipend. The prize honors “innovative thinkers and practitioners.”

Hamburger and this year’s three other award winners—Walter E. Williams of George Mason University, Peter Berkowitz of the Hoover Institution at Stanford University, and Christopher DeMuth of the Hudson Institute—were honored by the Lynde and Harry Bradley Foundation at a ceremony emceed by political columnist George Will before 400 guests at Sidney Harman Hall at the Shakespeare Theater in the capital.

The Milwaukee-based foundation has made grants of more than $875 million since its founding in 1985 with a mission “to restore, strengthen, and protect the principles of American exceptionalism,” said foundation president Richard Graber before introducing the honorees. “Fourteen years ago when we created these prizes, our goal was to recognize the accomplishments of conservatives who demonstrate how a single person can help change the world for the better.”

In his acceptance speech, Hamburger, who has been on the Columbia Law School faculty since 2006, expressed how meaningful it is to be honored as a scholar. “There are many reasons for gratitude and the primary reason is intellectual,” he said. “When the Bradley Foundation gives this award, it draws attention not merely to four scholars, but to our work and even more seriously, to the problems we study, and these problems are serious.”

Hamburger told the audience that “the central civil liberties issues of our time” is the increasing power of the administrative state. “It systematically evades the Constitution’s processes and rules and thereby violates one constitutional freedom after another,” he said. “We are at a remarkable moment in American history—a time when many Americans are beginning to realize how much our government is trying to rule us, not through law, but through mere power. It is a time, moreover, when many on both left and right recognize the danger. At this juncture, we, therefore, have a rare opportunity as a people, to rethink administrative power. We, therefore, need to concentrate our minds on the danger—to be self-conscious of the threat and to keep it at the forefront of our thoughts.”

Hamburger has been previously honored for his scholarship. In 2015, he won the $50,000 Hayek Book Prize from the Manhattan Institute for Is Administrative Law Unlawful? (University of Chicago Press, 2014) in which he argued that administrative law is not a benign, natural outgrowth of contemporary government but a pernicious and unlawful return to pre-constitutional absolutism. He has also received the Henry Paolicco-Walter Bagehot Book Award and the Sutherland Prize (twice) for the most significant contribution to English legal theory. His other books are Separation of Church and State, (Harvard University Press, 2002) and Law and Judicial Duty (Harvard University Press, 2008)

Hamburger’s areas of expertise are constitutional law, the First Amendment, administrative law, and legal history. His current scholarship focuses on freedom of speech and constitutional questions regarding the tax code’s restrictions on political speech for 501(c)(3) tax-exempt organizations.