Bamisope Adeyanju ’20 LL.M., an economic and social rights advocate, was awarded $50,000 by the global law firm. 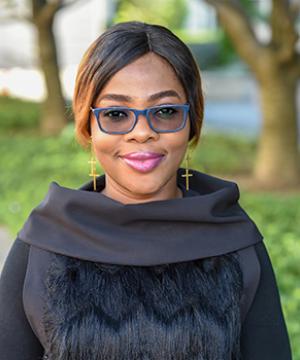 Bamisope Ibidolapo Adeyanju ’20 LL.M., a human rights attorney who led an effort to uncover the misappropriation of loan refunds in Nigeria, has been awarded the 2019–2020 Baker McKenzie Scholarship.

Before beginning her LL.M. studies at Columbia Law School, Adeyanju was an attorney at the Socio-Economic Rights and Accountability Project (SERAP), a leading human rights organization in Lagos. There, she led an effort to track down N388.304 billion, or about $1 billion, in London Paris Club loan refunds, which were supposed to have been used to repay worker pensions and salaries. Her efforts eventually led to a more robust accounting process for a later disbursement of funds.

“My dream is to keep advocating on issues that affect a large number of people,” she says. “That has always been my passion.”

Constanze Ulmer-Eilfort, executive committee member and chair of the Global Diversity and Inclusion Committee at Baker McKenzie, says, “We are delighted to award this year's Baker McKenzie Scholarship to Bamisope, and are honored to provide an opportunity to such a deserving and hardworking candidate.”

“Bamisope's strong passion and continuous efforts for advocating on these important issues surrounding human rights make her an ideal recipient of this scholarship program. Her achievements are truly remarkable and exemplify the advancement of diversity and inclusion.”

Adeyanju describes her interest in the law generally and in human rights in particular as stemming from her desire to help others.

“Even when I didn’t know what the law was, at a very young age I found myself always wanting to assist people,” she says.

At Adekunle Ajasin University, where she earned an undergraduate degree in law, Adeyanju prioritized public service projects. She advocated for the rights of people who have spent years in pretrial detention and served as president of the Green Law Society, raising awareness of and securing solutions for sanitation issues in local communities. The results inspired her.

“I thought, if we can achieve all of this by merely asking questions as undergraduate students, there is so much more we can do [as lawyers],” she explains.

After graduating from Nigerian Law School in 2015, Adeyanju worked briefly at a law firm focused on international arbitration and litigation, conducting research for proceedings before the International Centre for Settlement of Investment Disputes. In 2017, she joined SERAP.

At Columbia Law School, where she is a Human Rights LL.M. fellow, Adeyanju is a student in the Human Rights Clinic, which works with civil society organizations and individuals around the world to advance rights and justice. Adeyanju joins a team, led by the Human Rights Institute’s JoAnn Kamuf Ward, that is focused on racial justice and socio-economic rights in the United States. This year, they are advocating to promote the human right to sanitation in rural communities, including in Alabama.

“We are thrilled that Bamisope joins the clinic this year, and her experience advancing socio-economic rights in Nigeria will help the team in the U.S. to develop their advocacy strategy,” says Columbia Law School Professor Sarah Knuckey, director of the clinic and faculty co-director of the Human Rights Institute (HRI). “Her Baker McKenzie award is a fantastic recognition of her past contributions to human rights and to her great potential as a leading advocate.”

Adeyanju, who is taking human rights courses with Professor and HRI Co-Director Sarah Cleveland and HRI Senior Fellow Amal Clooney, eventually hopes to focus her work on environmental challenges in Africa and to advocate for the adoption or expansion of freedom of information and transparency laws across the continent.

The Baker McKenzie Scholarship at Columbia Law School, first established in 2015, awards $50,000 to an LL.M. student who demonstrates academic success and financial need, with a priority placed on students from Africa, Latin America, Asia, and Eastern Europe.

Adeyanju says receiving the scholarship is a “rare honor.”

“I appreciate the entire team at Baker McKenzie for the philanthropic gesture and their continued commitment to diversity and inclusion,” she says.