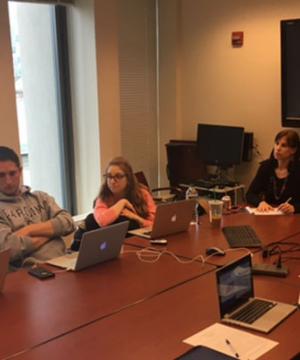 Nine Columbia Law School students are completing what may be the nation’s first law school externship focused on fighting corruption. The students have been placed in public integrity units at all levels of federal, state, and local government, learning first-hand the challenges of keeping government clean.

Public corruption seems to be “the issue du jour,” says Rachel Salem Pauley, who co-teaches the course, alluding to such high-profile cases as that of Sheldon Silver, the former Speaker of the New York State Assembly, who was sentenced to 12 years on federal wire fraud and extortion charges last May. “People have lost confidence in public officials.”

To lead the externship Pauley is teaming up with Jennifer Rodgers, who has headed the Center for the Advancement of Public Integrity (CAPI) since 2013, and who, earlier in her career, spent 13 years as a prosecutor with the U.S. Attorney’s Office for the Southern District of New York, including a stint as chief of its Organized Crime unit.

Rodgers and Pauley began envisioning the externship last summer, Rodgers recalls, and they launched it in January. “Between the two of us,” she continues, “we know everybody in this field, and we had the connections to be able to place students in lots of different offices.”

The students spend 15 hours a week at their disparate, individual placements, and then come together each Monday to share and reflect upon their experiences during a two-hour seminar.

Students are placed not only in the anti-corruption units of various prosecutors’ offices—including the Southern District, the Manhattan and Brooklyn D.A.’s Offices, and the state A.G.’s Office—but also in specialized preventive, oversight, and regulatory groups, like the N.Y. State Department of Investigation, the New York City Business Integrity Commission, and the Inspector General of the New York City Police Department.

For example, Rachel MacDonald ’18 was placed at the New York City Business Integrity Commission, an agency that works to preserve fairness in industries that were historically tainted by organized crime, like waste carting and the Fulton Fish Market. Her favorite assignments, she writes in an email, involved writing memos about the optimal implementation of new agency rules.

“I really felt like I was able to make an impact on New York City policy as a legal extern!”

And what Shiva Logarajah ’17 enjoyed most, he recounts, was working on the “forward thinking” issues at the Manhattan D.A.’s office, where he was stationed. There he assisted his supervising attorneys, for instance, as they considered more aggressive ways to use existing laws, and how to implement two new laws for which there was no reported case law.

Rodgers and Pauley cover the following topics in the weekly seminars:

When everyone gathers after being out in the field, Rodgers says, “we can look broadly at whether the system as a whole is working as it should, or whether there are gaps or overlaps.”