New CLS Web Site Helps Writers, Creators With Copyright Law
Press contact: James O’Neill 212-854-2650  Cell: 646-596-2935 [email protected]
September 20, 2007 (NEW YORK) - In the age of digital piracy, public debate over copyright most often pits ``content owner'' against downloader. Somewhere along the way, creators and authors were dropped from the equation.
But that could be changing. Last night, Columbia Law School’s Kernochan Center for Law, Media and the Arts, and the Program on Law and Technology unveiled KeepYourCopyrights.org, a Web site to educate creators about copyright and contracts, and arm them against the more egregious attempts by content owners to take control of artists’ creations.
The site was launched at an event honoring literary agent Morton Janklow ’53, a fervent advocate for authors’ rights long before the advent of digital technology.   Janklow made his name in the business when he negotiated his first publishing contract, which earned an unheard-of advance for William Safire’s 1975 book on Nixon, Before the Fall. Since then his client list has run the gamut from Danielle Steele to Pope John Paul II.
To see video of the event, click here.
Professor Jane Ginsburg, who currently holds the Morton L. Janklow Chair in Literary and Artistic Property Law, worked with fellow copyright professor Tim Wu to design the site as a resource with up-to-date legal content in language understandable to non-lawyers.
KeepYourCopyrights.org. emphasizes copyright and contract points that matter most, but are the least understood, Wu told the audience during a demonstration.  The site gives users a tutorial on copyright and shows how different types of contracts and clauses take away those rights.
The site shows clauses from real contracts and uses pictographs to rate them from an author or creator’s point of view.  A green thumbs-up indicates a creator-friendly contract, while an orange thumbs-down is creator-unfriendly. The worst offenders are tagged with a red claw, indicating “incredibly overreaching” language.
A sample of red claw language on the site is a  clause for a magazine freelancer, which grants the publisher exclusive rights that “shall include, but are not limited to the right to print, publish, license, distribute, and/or market, either directly or where applicable by third parties, any marketable right associated with the Work.” In other words, the clause grants to the publisher the exclusive right to make money in any conceivable way from the article.
Attendees at last night’s event at Jerome Greene Hall also honored the 15th anniversary of the Janklow Chair. Former Columbia Law Dean and Professor Lance Liebman introduced Mort Janklow and thanked him for his help in cultivating the school’s intellectual property endeavors. Liebman was a newly appointed dean in 1992 when Janklow endowed the chair.
KeepYourCopyrights.org will be continually updated. Wu and Ginsburg encourage people to submit questionable language in contracts they come across.  Before posting, Wu and Ginsburg redact the names from the contracts. Some of the worst examples so far have been submitted by employees of the companies that impose these contracts, he added. 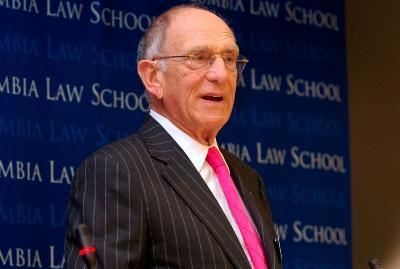 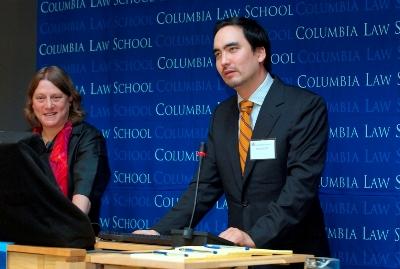 Professor Jane C. Ginsburg is a copyright and trademark expert and international vice president of the Association Littéraire et Artistique Internationale (ALAI), a global network devoted to the defense and advancement of authors’ rights. Her current research examines the domestic and international legal consequences of end-user dissemination of works of authorship.
Professor Tim Wu’s research is at the intersection of international trade, copyright, and
telecommunications law. He is perhaps best known for popularizing the concept of network neutrality. Wu is the coauthor of Who Controls the Internet? (Oxford University Press, 2006) and a writer for Slate magazine.
Morton L. Janklow built Janklow & Nesbit Associates, a prominent international literary agency whose clients have included Barbara Walters, Sidney Sheldon and four U.S. presidents. Janklow founded the Morton L. Janklow Program for Advocacy in the Arts at Columbia. He is a frequent visiting lecturer in intellectual property law.
Columbia Law School, founded in 1858, stands at the forefront of legal education and of the law in a global society. Columbia Law School joins traditional strengths in international and comparative law, constitutional law, administrative law, business law and human rights law with pioneering work in the areas of intellectual property, digital technology, sexuality and gender, and criminal law.