Michael Graetz Saw the ‘Wolf at the Door’ Before the Coronavirus Arrived in the U.S.

The Columbia Law professor’s new book, The Wolf at the Door: The Menace of Economic Insecurity and How to Fight It, offers realistic policy solutions that prioritize the welfare of individuals to create a more just and stable society.

Long before the coronavirus pandemic caused mass layoffs and more than 30 million Americans to file unemployment claims in a matter of four weeks, Michael Graetz, Columbia Alumni Professor of Tax Law and a former official in the U.S. Treasury Department, was worried that too many American households live paycheck to paycheck. “Economic insecurity, anxiety, and fear were already pervasive. Any shock to the economy or to the workforce was going to cause lots of hardship,” he says. “Of course, no one could have foretold how large and difficult this shock has become.”

In his new book, The Wolf at the Door: The Menace of Economic Insecurity and How to Fight It, which was published in February by Harvard University Press, he and co-author Ian Shapiro (a professor of political science at Yale) analyze how the globalization of the workforce, outsourcing, and technological advances threatened millions of people’s livelihoods and contributed to widespread income insecurity before the pandemic. “When the book went to press in November, the virus wasn’t on the horizon,” says Graetz. “All the reasons we cite in the book for worrying about widespread economic insecurity are going to be made worse because some businesses are not going to reopen and jobs are going to disappear. We have a precarious workforce, and the economic shocks from the virus are making it much more vulnerable.”

In The Wolf at the Door, Graetz and Shapiro argue that maintaining the status quo is perilous and immoral. “It is essential that society help people who are left behind or who are in danger of it,” they write. “Otherwise these people may well reject the social contract and succumb to the poisonous snake oil peddled by political charlatans.”

A Game Plan for Change 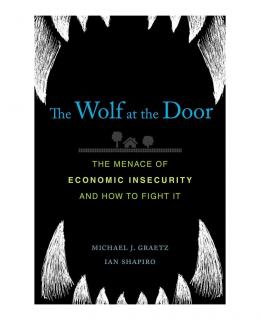 Graetz and Shapiro believe that the current rhetoric of the left and right—the former railing against the 1 percent and the latter advocating for tax cuts and deregulation—may be effective in political campaigns but not in passing legislation that will address the economic insecurity of most Americans. They explain why moral imperatives, bipartisan coalitions, and the support of labor and business interests are the keys to creating substantive change. The authors offer a suite of policy strategies to combat economic insecurity, including increasing take-home pay, creating infrastructure jobs, offering universal health insurance and universal pre-K, introducing effective job reemployment programs, and providing adequate unemployment insurance.

In a telephone call from his Manhattan apartment, where he has been sequestering, Graetz explains that the U.S. unemployment insurance system that was designed in the 1930s desperately needs to be overhauled. “We don’t have a system that works,” he says. “We have a patchwork of 50 inadequate unemployment systems that vary from state to state.”

Temporary and contract workers, he notes, accounted for 94 percent of job growth between 2005 and 2015, but until the crisis they were not eligible for unemployment benefits. Indeed, only 27 percent of unemployed workers in 2016 received benefits. “If we had an unemployment insurance system that met the needs of the modern workforce, we could have built on that [in this crisis] instead of sending cash payments to people,” he continues, referring to the emergency relief bill passed by Congress in March.

“It has always been a house built on sand and now that we want to add to it we don’t have a solid foundation to build on,” Graetz continues. He advocates for a national Universal Adjustment Assistance program that would combine solid unemployment insurance for all workers—including independent contractors and part-time or seasonal workers—with job relocation, education, and retraining opportunities.

In their previous book, Death by a Thousand Cuts: The Fight over Taxing Inherited Wealth, Graetz and Shapiro explained how groups with divergent political views but overlapping interests were instrumental in repealing the estate tax in 2001. A similar solution, Graetz says, will be needed to pass legislation to address the issues described in The Wolf at the Door. “The political problem is that there’s no constituency for unemployed workers,” he says. “Nobody has wanted to think of themselves as the future unemployed.”

As an authority on tax law, Graetz’s idealism is tempered by realism. “The biggest political challenge is raising the taxes that will ultimately be needed to help finance the changes we recommend,” he says. “But political leaders in both parties behave as though this is an untouchable third rail in American politics.” Graetz’s ideas for raising revenue include eliminating certain tax breaks for businesses and their owners, along with hedge fund and private equity managers. He also suggests increased funding for the IRS to collect billions of taxes that go uncollected, a tax on financial institutions based on their liabilities, a low-rate tax on financial trading, and, over time, a value-added tax.

Graetz believes that every law student would benefit from taking a course in tax law. “It is a huge source of economic and social policy,” he says. Graetz developed his appreciation for the importance of politics and economics vis-à-vis tax law and policy at the U.S. Treasury Department, where he served as assistant to the secretary and special counsel in 1992 and before that in the office of the assistant secretary of the Treasury for tax policy. His interdisciplinary approach to policy issues is reflected in his scholarship and the courses he’s taught over his career as a professor at the University of Virginia (where he earned his law degree), the University of Southern California, Caltech, Yale, and Columbia Law, where he has taught since 2009.

Columbia Law students in the Democracy and Distribution seminar that Graetz co-taught with Shapiro played an integral role in shaping The Wolf at the Door. “They were particularly useful in sharpening our focus,” he says. “They asked hard questions and raised issues that helped refine our thinking.”