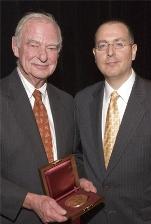 The Law School has ``produced no finer role model than Gerry Lenfest,’’ said Dean David M. Schizer as he presented Lenfest with the 2008 Medal For Excellence.
Lenfest, president of the Lenfest Foundation, has given $33 million to the Law School, including more than $15 million to build Lenfest Hall, the Law School’s premier residence hall, which opened in 2003. He is also helping the Law School endow 10 new professors’ chairs with matching gifts. ``No one has done more to help Columbia Law School,’’ Dean Schizer said.
Five former deans attended the 2008 Winter Luncheon, which featured a 10-minute video that described their accomplishments while in office. ``In everything we do, we are standing on the shoulders of giants,’’ Dean Schizer said during introductory remarks. ``I am tremendously lucky to follow a group of truly remarkable deans. We all benefit from their wisdom, their energy and their passion for our Law School. It means a great deal to me to be able to thank them, today, for all that they have done.’’
The former deans who attended were Michael Sovern (1970-1979), Benno Schmidt (1984-1986), Barbara Aronstein Black (1986-1991), Lance Liebman (1991-1996) and David Leebron (1996-2004). Albert Rosenthal (1979-1984), who could not attend, was also featured in the video. 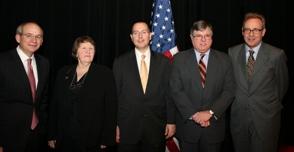 Current Dean David M. Schizer (center) with former deans (left to right) David Leebron, Barbara Aronstein Black, Benno Schmidt and Lance Liebman
During the speech, Dean Schizer said that as the Law School begins its sesquicentennial celebration, it ``has never been stronger.’’ There were 7,292 applications for this year’s entering class of 365, and every year Columbia receives more applications than its peer schools, Dean Schizer said..
The students’ credentials ``are off the charts,’’ he said. In this year’s entering class, 59 percent were in the top one percent on the LSATs, and 75 percent were in the top two percent of their undergraduate classes.
He said the Law School hired seven new faculty for the academic year, and that the school is building a ninth floor on Jerome Greene Hall to make room for future faculty hires. The floor will accommodate 38 new faculty offices.
To help pay for more faculty without increasing student enrollment, the Law School has set fundraising records in the past two years, ``more than doubling the amount of money that the school has traditionally raised,’’ Dean Schizer said.
When accepting his award, Lenfest recalled some of the stellar faculty he studied under while at Columbia in the late 1950s, including Adolph Berle, Walter Gellhorn and Richard Powell. ``It was a very proud moment for me to be accepted to Columbia,’’ he said.
``But the Law School, like everything else, has to change,’’ he said. He said the Law School has added new strengths, and that today 23 percent of the student body are international students, while about a third are people of color.
``We’re really here today to celebrate the records of the deans,’’ Lenfest said. ``We should be very proud of this great Law School.’’
Lenfest, who began his legal career at the New York firm of Davis Polk & Wardwell, was recruited in 1965 by prominent Philadelphia publisher Walter Annenberg to join Triangle Publications as corporate counsel.
Later, when Annenberg decided to sell his cable television assets, Lenfest bought them and launched Lenfest Communications, which he built into the Philadelphia region’s largest cable operator, with 1.2 million subscribers. In 2000, he sold the cable television operations to Comcast Corporation.
Lenfest, a former member of the Law School’s Board of Visitors, is a member of the Columbia University Board of Trustees. He also chairs the boards of the Philadelphia Museum of Art and the Curtis Institute of Music. Through the Lenfest Foundation, he and his wife Marguerite sponsor a college scholarship program for students in rural areas of Pennsylvania, New Jersey and Delaware.
Dean Schizer described Lenfest as someone ``with a profound integrity and a real passion for improving the world,’’ someone who is ``incredibly insightful about people’’ and ``the most modest person’’ he knows.
About 275 faculty, alumni and family members sat beneath the gold- and silver-flecked ceiling of the Waldorf’s Grand Ballroom during the Winter Luncheon and watched the sesquicentennial video on four large screens suspended from the balcony.
The event also celebrated the many Columbia Law School alumni who serve as judges in local, state and federal courts. About 35 of them attended the event. They were presented with a red rose boutonniere in the Waldorf’s Silver Corridor before entering the East Foyer for a cocktail reception which preceded the luncheon.

Video highlights of the luncheon are available here. 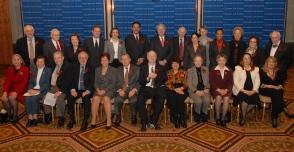