Five students—Jacob Johnston ’12, Akshaya Kumar ’12, Jennifer Lim ’12, Benjamin Schrier ’12, and James Wigginton ’13—will compete against teams from around the world in the White & Case International Rounds of the Philip C. Jessup International Moot Court Competition, which will be held in Washington, D.C. between March 20 and 26.

The team advanced to the final rounds after placing first at the Northeast Super Regional Tournament where they defeated 24 schools including teams from Yale Law School, Harvard Law School, Cornell University Law School, and NYU School of Law.  Benjamin Schrier ’12 won an award for best oralist in the championship round against Boston College.  In preparation for the rigorous competition, the team has received guidance from various people including faculty adviser, Lori Damrosch, the Henry L. Moses Professor of Law and International Organization, team adviser Viren Mascarenhas ’05, coaches, Elisabeth Page ’11, Kevin Lin ’11, and Ricardo Chirinos ’11 (LL.M.), and others.

Named after Columbia Law Professor Philip C. Jessup, this event is considered the premier international moot court competition, with participants from over 500 law schools across more than 80 nations.  It is sponsored by the International Law Students Association (ILSA) in conjunction with the American Society of International Law (ASIL), under rules prescribed by ILSA/ASIL.  The competition simulates a dispute between two countries before the International Court of Justice (ICJ), the judicial arm of the United Nations.  This year’s topic addresses drone warfare, the targeted killing of suspected terrorists, public bans on religious garments, and the OECD's anti-bribery regime.

Another group of Law School students—Mariel Fernandez ’13, Jessica Fjeld ’13, David MacCallum ’13, and Derek Russell-Kraft ’12—will compete in the All-European Final of the European Law Moot Court Competition on April 1 in Luxembourg.  The students will argue issues of European Union law against three teams to vie for the final prize. Katharina Pistor, the Michael I. Sovern Professor of Law, serves as faculty adviser. 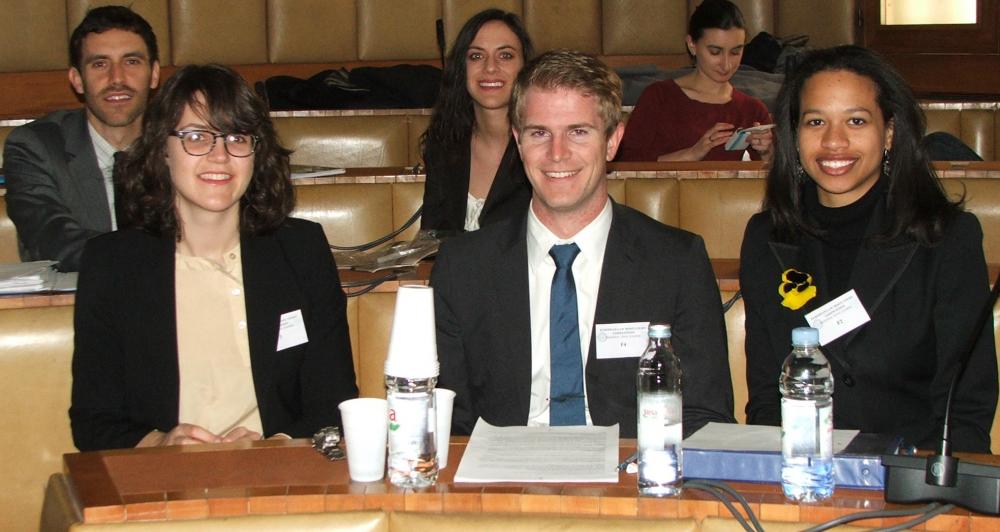 The other Law School team— Swift Edgar ’13, Katherine Gorman ’13, Elizabeth Hanly ’13, and Mirela Missova ’13—performed well in the semifinals in Heidelberg, Germany where Edgar won an award of distinction for outstanding pleading in the first round. The team was coached by another veteran European Law Moot Court competitor, Sam Hershey ’12.

The European Law Moot Court Competition, founded in 1988, is the second largest international moot court competition in the world and brings together student participants, judges, coaches, and guests from throughout Europe, the United States, and other countries. It is considered the most prestigious moot court competition in Europe.  This year’s topic addresses fundamental European Union rights and freedoms in the context of media law, as well as enforcement mechanisms for domestic laws between Member States.

“I am very proud of how well the Columbia students have done in these two competitions,” said Mascarenhas, a team adviser.  “The moot court problems this year involve tough, cutting-edge questions of European Union law and public international law; there are no clear-cut answers to the problems.  It is impressive to watch these students master tough areas of the law in a short period of time, and then argue on their feet like experienced practitioners who have been doing this for all of their professional lives.”

Both competitions are made possible by a generous contribution from Milbank, Tweed, Hadley & McCloy LLP.