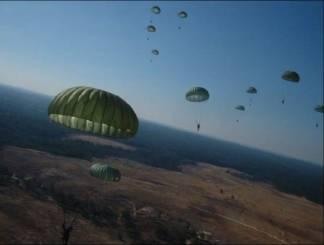 Photo taken by Haryle Kaldis '11 during a jump with the Army's 82nd Airborne Division. Kaldis, a former paratrooper and infantry squad leader, served near the Demilitarized Zone in South Korea and is the Columbia Law School Military Association's 1L Representative.

November 11, 2008 (NEW YORK) – With the formation of the Columbia Law School Military Association this fall, Law School students have revived an organization dedicated to the connection between military service and the law. The last incarnation of the group, the Society of Cincinnatus, ended in 1998.

"Our goal is to provide a forum both for veterans facing the tough transition from military to student life and for civilian students who want to learn more about the military," said Association President Brian Donnelly ’11.
The association comprises about 25 members, including current military, former military and civilians. Military service is not a prerequisite to join the association. Its military members have served in Iraq, Afghanistan and several other foreign countries, in a wide variety of jobs, including infantry, artillery, computers and public affairs. One member is a future Army lawyer whose active-duty service will begin again next year in the JAG Corps.
While some ex-military students find adapting to law school difficult, others find their experience has actually eased the adjustment. “It allows me to have a slightly different perspective from others who have come straight from undergraduate or even who have worked civilian jobs between undergraduate and law school,” said Han, one of the founders. “Nothing seems quite so hard in law school.”
Association member Richard Meyer ’12 J.S.D is an Army lawyer currently on the faculty at West Point and Columbia Law School, teaching the Law of Genocide with Professor George Fletcher this semester. “Columbia Law School and the military have a lot of shared history,” he said, pointing to Professor Francis Lieber who promulgated the Lieber Code, which was adopted by President Lincoln and formed the basis for modern international humanitarian law governing the conduct of war, and also to Columbia University President, U.S. President and General of the Army, Dwight Eisenhower.

“I support the group partly because I want this connection to continue—I have already had one workshop this year involving both Columbia Law students and West Point cadets—and partly because I think that Columbia gains from having the military perspective shared in classes, particularly while the nation is at war,” Meyer said.

This year 13 of the approximately 1,400 students at the Law School self-identify as military or ex-military. There was at time when being a veteran and a Law School student wasn’t so extraordinary – in 1946 they were nearly three-quarters of the entering class. From 1945 to 1950 dozens of Columbia-trained lawyers and Columbia Law professors served at the Nuremberg Trials. Among them were William J. Donovan, Class of 1908, wartime head of the Office of Strategic Services, and Brigadier General Telford Taylor, who joined the Law School faculty in 1963.

Military Association Secretary Kate Swearengen ’11 is not ex-military but is the granddaughter of a WWII medic. She studied Arabic in college and then studied in Cairo and wrote her master's thesis about French soldiers and officers stationed in Algeria during the mid-1800s. “My question after all of that was, how can I use these skills or experiences in a way that truly benefits my country?” Her answer is to use that experience and her future J.D. to work in veterans’ advocacy. “There is, and will, be a terrific need for that.”

Association member Pat McGill ’09 is working with the Law School to find official outlets for students interested in veterans’ affairs, such as a veteran-related pro bono or externship program. Donnelly said: “We are hopeful that these programs will materialize and excited about the prospect of using our training to help veterans get the legal services, support and advocacy they deserve."

The association held a lunchtime panel on October 27 that promised speakers who all “bring a unique perspective to academic life.” They discussed their experiences in Iraq, Afghanistan, the Balkans, Korea and Northern Africa from a variety of military experiences – some officers, some enlisted, some who served in war, some who served in peace. The group asked that the audience “be mindful that some panelists might have had traumatic experiences.”

When asked what Iraqis really feel about the United States, Han said, “It’s more like disappointment in the U.S. than that Iraqis didn’t like us or want us.” And he described the aftermath of being there – survivor’s guilt. “You’re always comparing yourself to those who sacrificed more than you did.” 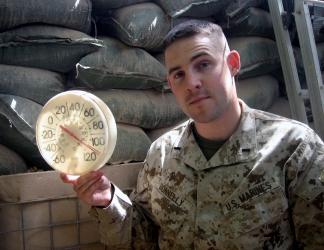 Brian P. Donnelly '11 hangs out in the 112-degree shade at Camp Fallujah, Iraq. Donnelly, a former Marine captain, helped coordinate the embedded media program in Al Anbar Province, Iraq, from February to August 2006 and is the current president of the CLS Military Association. 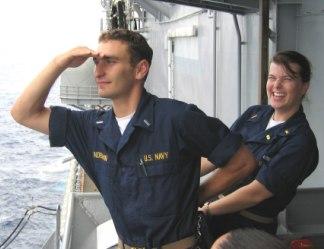 Erik Lindemann '11 (left), a former Navy surface warfare officer, stands on the bridge of the USS Peleliu while on deployment in the Arabian Sea in 2003. 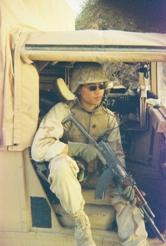