New York, February 14, 2016—Constitutional law scholar Jamal Greene and Edward R. Morrison, a bankruptcy law professor and economist who served as a law clerk to U.S. Supreme Court Justice Scalia, remember the powerful influence of the longest-serving member of the current court.
Edward Morrison
Upon learning of the passing of his former boss, Morrison, the Charles Evans Gerber Professor of Law—who clerked for Justice Scalia during the 2001-02 term—offered the following remembrance:
"Whatever your political views, Justice Scalia was a fiery intellectual force. He inspired us to be more careful, creative, and analytically rigorous when we talk about courts as a force for social change. His decisions and jurisprudential philosophy will echo in the law for generations, if not centuries.
What I remember most? He once said to me: "What's the half-life of the typical academic article? 2 years? 4 years, if you're lucky? Compare that to the impact you have as a teacher. That lasts generations."
Jamal Greene
Greene, a vice dean who has taught constitutional law since he joined the Law School in 2008, is a frequent speaker and writer on constitutional theory and originalism. He shared his views on Justice Scalia’s broad and deep influence on lawyers and judges, as well as on the public, in a Feb. 14 New York Times opinion essay and as a guest on the PBS NewsHour.
Richard Liskov
Columbia Law School lecturer Richard G. Liskov contributed a letter to the editor, “The Battle Lines Over the Supreme Court," published Feb. 16 by The New York Times stating:
The deep and enduring friendship between Justice Antonin Scalia and Justice Ruth Bader Ginsburg — despite their sharp ideological differences — casts a truly sad reflection on the failure of 535 representatives and senators to emulate the justices’ mutually felt spirit of being able to work together, notwithstanding a partisan divide.
What a tribute to the memory of Justice Scalia it would make if somehow that ethos could cross North First Street from the Supreme Court building to reach the Capitol.
# # # 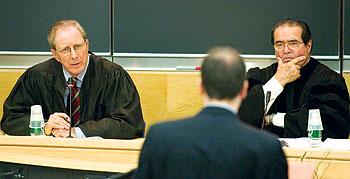