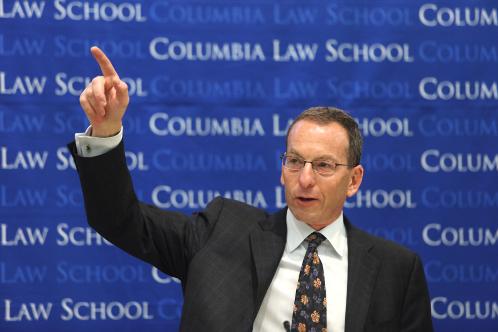 Lanny Breuer '85, Assistant Attorney General for the Justice Department's Criminal Division, spoke at the Law School about international justice and human rights.  (Photo by Michael Dames)
New York, Oct. 9, 2009 – Lanny Breuer ’85 is in a good position to know that justice has no boundaries.
As Assistant U.S. Attorney General for the Criminal Division, Breuer leads a team of more than 400 lawyers pursuing cases involving everything from cyber-theft to war crimes. And their portfolio stretches way beyond Department of Justice headquarters in Washington.
Dozens are stationed in 37 countries, advising governments on how to reform their legal systems and make them more professional and transparent, Breuer said in an Oct. 7 address at Columbia Law School.
“The importance of this work really cannot be overstated,” said Breuer, whose appearance was presented by the Dean’s Office and Social Justice Initiatives. “Promoting the impartial administration of justice around the world protects our global community from the lawlessness that endangers basic human rights and, in fact, endangers our national security.”
Breuer said having these lawyers, known as resident legal advisors, in countries like Mexico, Iraq, Bosnia, Indonesia, and the Ukraine (two of the advisors there were in Breuer’s Law School class) is “utterly essential” at a time when crime “has become international and borders no longer matter.”
The advisors usually serve one to four years. They help draft and review legislation, and train judges and prosecutors. It is work that can be as dangerous as it is rewarding. Breuer recently returned from Mexico City. His advisor there lives behind barbed wire and a fortified wall, but has still had intruders try to break into his home three times.
“And yet he’s willing to do it because he feels strongly in the mission of what we’re doing in helping to work with the government,” Breuer said.
The advisors’ efforts can be especially important role in aiding other nations in the fight against terrorism, organized crime, corruption, and financial swindles. But Breuer said the impact can be even greater in the area of human rights.
“Each day, countless men, women and children across the globe lack the security that we enjoy in this country,” Breuer said. “It falls on us to help our foreign partners build their own effective and sustainable institutions that promote the rule of law.”
Breuer, whose parents escaped the Nazis but lost his grandparents in the Holocaust, also places a high priority on pursuing human rights violators who wind up in the U.S. That includes the decades-long effort that ended in March to deport accused Nazi death camp guard John Demjanjuk – who is set to stand trial in Germany in November at age 89.
“In this case justice was delayed, but in my view, it was not denied,” Breuer said. “Our resolve in this area cannot and will not be greater. We will simply not allow those who commit unspeakable atrocities abroad to enter or remain within our borders.”

This is Breuer’s third position in the public sector. He started his career in the Manhattan district attorney’s office, after being encouraged to pursue that path by one of his instructors, Gerard E. Lynch ’75, the Paul J. Kellner Professor of Law, who introduced Breuer on Wednesday. Breuer called Lynch, recently confirmed as a judge on the Court of Appeals for the Second Circuit, “truly a giant.”
Breuer later served as special counsel to President Clinton, whom he defended during impeachment hearings and other investigations. Both jobs were followed by extended stints at Covington & Burling in Washington, where he practiced white-collar criminal defense.
Breuer acknowledged students can be easily lured to large firms by high salaries. But he urged them to consider spending at least part of their career working in the public sector.
“I’ve never had a job that I haven’t loved, and although I enjoyed my private practice at Covington immensely … it’s really been my time in the public sector that for me has absolutely been the most rewarding,” Breuer said.
The same holds for his current job: “I wake up every day and I pinch myself. I can think of no greater honor than to serve as the Assistant Attorney General under President Obama.”
Listen to an audio recording of the event: media.law.columbia.edu/specialevents/breuer091007.mp3
Columbia Law School, founded in 1858, stands at the forefront of legal education and of the law in a global society. Columbia Law School joins its traditional strengths in international and comparative law, constitutional law, administrative law, business law and human rights law with pioneering work in the areas of intellectual property, digital technology, sexuality and gender, criminal, national security, and environmental law.
Visit us at www.law.columbia.edu.