Brad Smith ’84 and Kathy Surace-Smith ’84, co-chairs of the $300 million Campaign for Columbia Law, have demonstrated their leadership with a $1.25 million gift to the Human Rights Clinic.

“Clinics are invaluable for developing the next generation of leading lawyers and advocates for justice,” said Brad, President and Chief Legal Officer of Microsoft. “We appreciate the extent to which the Law School is training people to go out and be better lawyers and more broad-minded citizens of the world.” He said his affinity for the Human Rights Clinic stems, in part, from leading Microsoft’s corporate social responsibility work which focuses on applying “the power of technology to advance human rights.”

The couple met as undergraduates at Princeton University and attended the Law School in the early 1980s when both clinical education and human rights law were relatively young fields. “We studied human rights more theoretically, and we never really imagined that at a practical level we could make a difference as students,” said Kathy, who is Vice President and General Counsel of NanoString, a publicly traded biotech company. “Now, the opportunities for students to have real-world impact is greater, and it’s pretty amazing to us. We want to support more of that work.”

The Human Rights Clinic works around the world, on diverse issues ranging from accountability for sexual violence to investigations of war crimes, counterterrorism, corporate accountability, worker’s rights, and the rights to health, water, and education.

“The great generosity of the Smiths will allow Columbia to broaden and deepen our human rights and educational impacts,” said Professor Sarah Knuckey, the Director of the Human Rights Clinic and Faculty Co-Director of the Human Rights Institute. “The gift means we can increase the size and range of our expert team of clinical supervisors, and thus offer our intensive training to more students every year. Increased resources provide greater capacity for innovation, skills and regional diversity, and enable deeper partnerships with and support to NGOs and communities around the world.”

The couple’s gift will also fund travel so that participants can directly work with overseas clients and investigate human rights abuses on the ground. “The students are getting on planes and flying halfway around the world. That was not an opportunity we had,” said Brad, recalling that he and Kathy did not leave campus when they participated in Columbia’s Immigration Law Clinic as J.D. students. “It was about working with a client who was already in New York and would travel to Columbia to meet with us.”

Brad has described his clinic experience as invaluable in several ways. It taught him how to “listen like a lawyer” and to practice law even before he’d passed the bar; and it fostered a lifelong concern for immigrants’ issues, including his co-founding Kids in Need of Defense (KIND), a nationwide pro bono program that has trained more than 6,000 lawyers to represent unaccompanied children in U.S. immigration courts. (The actress and filmmaker Angelina Jolie was the co-founder of KIND, where Brad remains chairman of the board.) 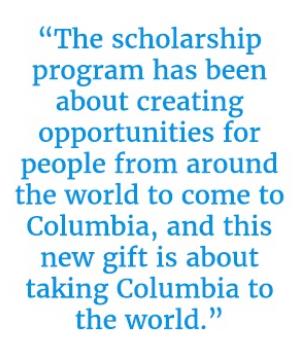 The Smiths are stalwart supporters of the Law School. Kathy has been the co-chair of the Annual Fund, and in 2004, they established the Smith Family Opportunity Scholarship. “We wanted to fund a scholarship for students from parts of the world who don’t normally come to Columbia for education, so we’ve had students from Africa and Eastern Europe benefit from it,” she said.

As Brad observed: “The scholarship program has been about creating opportunities for people from around the world to come to Columbia, and this new gift is about taking Columbia to the world.”

Kathy and Brad have been globalists since Law School. After their 2L year, they were married at the United Nations Chapel and spent the next year studying at the Graduate Institute of International and Development Studies in Geneva, Switzerland, before returning to Columbia to complete their studies. “It was a year-long honeymoon, so to speak,” said Kathy.

The Smiths are major philanthropists in and around Seattle where they live—serving on boards and raising funds for organizations like the United Way, YWCA, and the Fred Hutchinson Cancer Center—but Columbia Law School is always a priority. “In our careers, we have certainly benefited from those who were ahead of us who lent us a helping hand,” said Brad. “We each have an opportunity to do the same and have a meaningful impact on somebody else’s life.”

The couple encourages their fellow alumni to donate as generously as possible to the Campaign for Columbia Law whose goals include making participation in Columbia’s ten clinics accessible to every interested student. “We’re very enthusiastic about Dean Lester’s vision for the school,” said Brad. “We’re big believers in that vision. And like all great visions, it definitely will take resources to bring it to life.”

The Campaign for Columbia Law