The Human Rights Clinic is bringing transparency to the Third World, studying extraction contracts signed by former corrupt dictators that have robbed needy citizens of billions of dollars.
By Paul Wachter
African officials who have begun questioning the fairness of oil and mining contracts signed by former corrupt dictators are being assisted in their probe by Columbia Law School’s Human Rights Clinic.
Earlier this year, the Clinic was awarded a $150,000 grant from the Revenue Watch Institute for a one-year project to promote the transparency of resource exploitation contracts in the developing world. The Institute is a joint project of the Open Society Institute, the Norwegian government and the Hewlitt Foundation.
“Many of these resource-rich countries had produced billions of dollars in revenue, but had nothing to show for it,” said Professor Peter Rosenblum ’92 LL.M., the Lieff, Cabraser, Heimann & Bernstein Clinical Professor of Human Rights Law. He has spent much of his career helping to improve financial transparency in Africa. 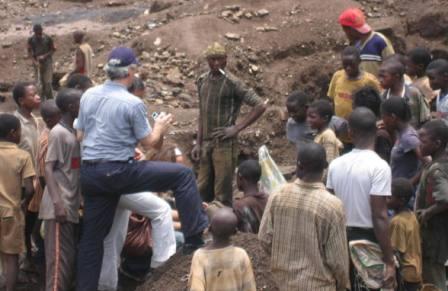 Professor Peter Rosenblum recently visited a Congolese mine.
Historically, much of the revenue from Third World mineral resources has ended up in either the hands of foreign companies or the secret bank accounts of dictators and their cronies. Corruption was often overlooked by the outside world during the Cold War, but in the 1990s the World Bank and various NGOs began to take notice — as did Africans in burgeoning democracies.
Susan Maples, ’07, the primary beneficiary of the transparency grant, postponed her start at the London office of Skadden, Arps, Slate, Meagher & Flom, to work on these contracts. She is currently analyzing the confidentiality clauses in the vast repository of contracts from throughout the world collected by the Barrows Company, a Manhattan-based international reference library for oil, gas and mineral laws. The archives are stored at Columbia Law School’s Diamond Library.
“By studying these clauses, which often are used as a means of hiding corruption rather than protecting trade secrets, we get a better sense of how best to attain transparency,” Maples said.
Accounting for corruption is not easy. Though many contracts were public documents, some signing parties have taken great pains to keep them out of the public eye.
“Here we were trying to promote transparency, and we had never even seen, say, the contract between Chad and Exxon,” Rosenblum said. “We’d ask Exxon, and they’d say they couldn’t give it to us, even though it was a public document, or they’d tell us to ask the parliament of Chad.” However, Chad’s government was so disorganized and corrupt that it could not produce a copy, Rosenblum added.
Since joining the Columbia faculty in 1998, Rosenblum has led groups of students to Africa to investigate and consult on government contracts with mining and oil companies. The nations of Liberia, the Democratic Republic of Congo, Chad and the Democratic Republic of Sao Tome and Principe (islands off the coast of Gabon) have been the main focus of these initiatives.
“While each of these countries has its own peculiarities in terms of contracts, the work we’re doing is all of one piece in trying to bring greater transparency and combat corruption,” Rosenblum said. While the transparency grant is “non-country specific,” Rosenblum said the clinic will continue to primarily focus its efforts on African nations. 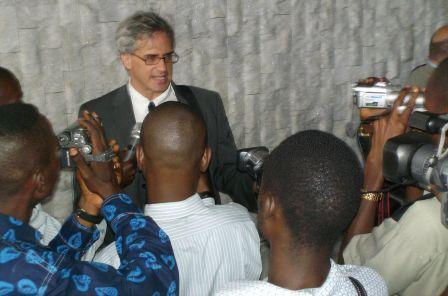 Prof. Rosenblum talks with reporters about the creation of a mining review commission in Kinshasha, the capital of the Democratic Republic of the Congo.
In one of the Human Rights Clinic’s most successful projects, Rosenblum and several students, including Maples, in partnership with Columbia's Earth Institute, were invited to Liberia in summer 2006 by the European Commission.  There, under the new, democratically elected government of Prime Minister Ellen Johnson-Sirleaf, a former World Bank economist,   the professor and his students helped analyze Liberia’s mining contracts with foreign companies, including Mittal Steel, the world’s largest steel producer.
“These were lousy contracts, in which Liberia got a terrible deal,” Rosenblum said. “You could hand one to a first-year contracts student, who would be able to tell you how bad they were.”
A major problem, Rosenblum said, was that many African nations were inexperienced in writing contracts. The corporations argued -- not always unreasonably -- that the risk they were assuming in operating in potentially unstable lands justified their terms. Still, African officials were ill-equipped to negotiate with seasoned foreign multinationals.
“One of the things we saw so starkly with the Mittal contract was that the legal agreement gives the company much more power than is necessary to achieve even its own business objectives,” said Stephen Seymour ’06, one of the students who accompanied Rosenblum to Liberia.
Once the unfavorable terms of Mittal Steel’s $900 million contract — which included tax breaks, land access and favorable pricing schemes for iron ore — were made public, the company, which did not want to see its operations in other parts of the world jeopardized by the unflattering attention, signed an amended contract. Passed into law by the Liberian parliament in May 2007, it eliminates Mittal’s freedom to set ore prices, a five-year tax holiday and an overly generous control over the nation’s infrastructure.
Similar efforts are underway in the Democratic Republic of Congo, where clinic students are conducting field research and creating an interactive online map containing up-to-date information on mining companies, investors, labor conditions and supply chains.
“Not all of the contracts in each of these countries are as patently unfair as  Mittal’s was with Liberia,” Maples said. “In many cases, the larger problem is that they are simply unclear, not as sophisticated as you would expect. So, you have to dig deep to find out if these contracts are simply a means of lending paper legitimacy to a backroom deal, or if the companies named in the deal exist in any real way. There’s a lot of room for corruption.”
Columbia Law School, founded in 1858, stands at the forefront of legal education and of the law in a global society. Columbia Law School joins traditional strengths in international and comparative law, constitutional law, administrative law, business law and human rights law with pioneering work in the areas of intellectual property, digital technology, sexuality and gender, and criminal law.