A member of the Ponca Tribe of Nebraska, Brossy is senior counsel in the American Indian Policy and Regulation practice at Akin Gump Strauss Hauer & Feld, in Washington, D.C. 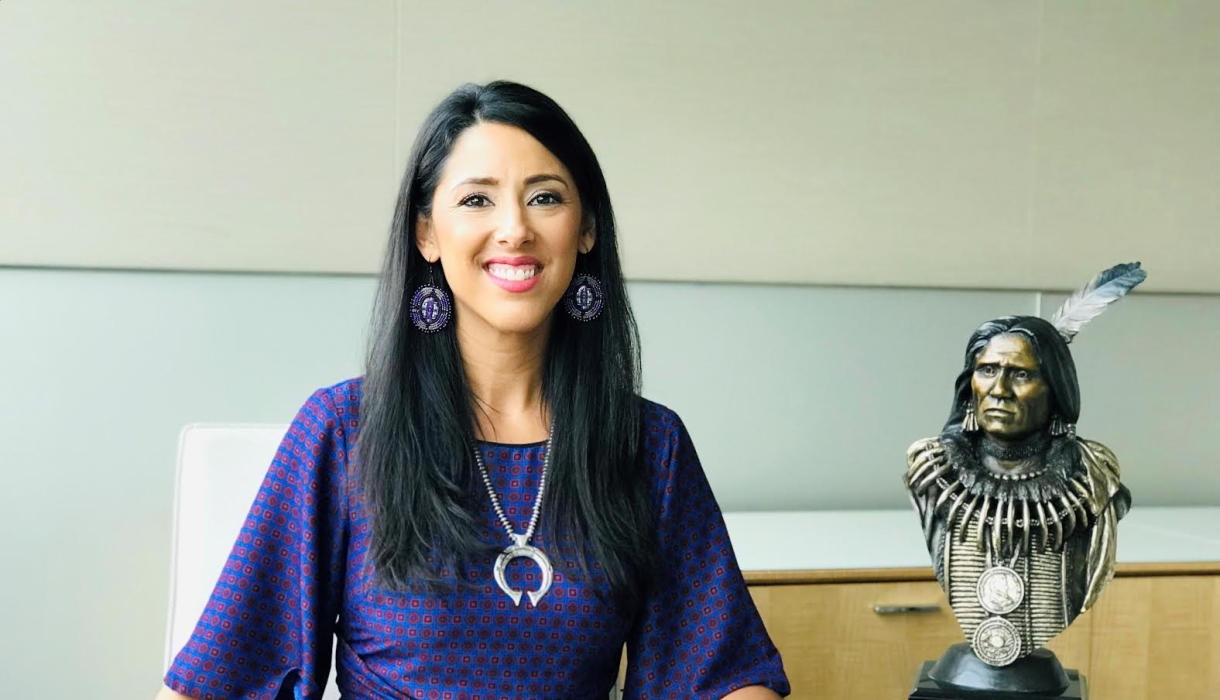 The best thing about my job is seeing that the work we do makes a difference in the day-to-day lives of Native people. We’ve been able to utilize mandatory statutory authority under the Indian Self-Determination and Education Assistance Act to build two new schools for the Gila River Indian community in Arizona. It’s an innovative approach for working on infrastructure in Indian country. What was wonderful is that the community was able to plan, design, and build a new school for the needs of its students. Hopefully, this is a model that can be replicated by other tribes, so they can dictate what their schools look like and have the ability to incorporate their tribal traditions and vision. I attended the opening of the Gila Crossing Community School; making sure that what I’m doing is going to have a positive effect on future generations of Native children and seeing the smiles on their faces is what it’s all about.

What’s the hardest part of your job?

Working at a Big Law firm, there are challenges in finding a good home-work balance. I have two small children, and I must say that my firm is very supportive. But it can be stressful and challenging when your tribal clients are paying you large law firm fees; you want to deliver for what they’re paying you, right? So it’s a high stress level job, and you’re always on call. Every once in a while, you’ve got to work until the wee hours to get things done, but that’s just part of the game, and, again, it is all worth it when we’re able to accomplish our tribal clients’ goals and see real progress in their communities.

Why did you want to go to law school?

Being an attorney is a way to really impact issues on the ground, so I went to law school knowing that I specifically wanted to work for Native people on Native issues. I am the first member of my tribe, the Ponca Tribe of Nebraska, to go to law school and practice law—at least that is what I have been told. I have a long line of tribal leaders in my family who always encouraged me to work for our Native people and to use the law to do that effectively.

Why did you choose Columbia Law School?

I’m from Nebraska, and I only applied to the University of Nebraska College of Law because I didn’t really want to leave home. I am very close to my family. But then, the summer before law school, I attended the Pre-Law Summer Institute for American Indians and Alaska Natives in Albuquerque, New Mexico. While I was at the program, other schools came to recruit, and Columbia was there; I’d done very well in the summer program, and fortunately, I was accepted to Columbia.

It was a culture shock, to say the least, to go from Nebraska to New York City! But I felt it was a once-in-a-lifetime opportunity to attend such an incredible law school. It pushed me outside my comfort zone and opened up so many doors. I participated in the Native American Law Students Association Moot Court, and that was a really great learning opportunity. The most important part of law school was learning to think like an attorney.

Why did you want to work at Akin Gump?

I came over from a smaller, boutique firm, and I wanted to join a larger firm that had an excellent reputation for working on tribal law and policy issues. Also, Akin Gump was doing some work for the Ponca Tribe, which made it a natural fit.

Why did you want to practice in Washington, D.C.?

It was a good compromise between Nebraska and New York City. Congress is here, the administration is here. It is the place if you want to be working on current Native policy and relevant issues. A common phrase among our practitioners is, “All roads in Indian country lead to D.C.”

The Brief on Katie Brossy ’05

Hometown: Lincoln, Nebraska
Current city:  Alexandria, Virginia
Personal: Brossy and her husband, Jackson Slim Brossy (Navajo), have two children, Evan, 8, and Jacob, 4. She enjoys bike riding and exploring National Parks, and she is a trustee of the National Park Trust.
Pro bono: “My mother, Judi gaiashkibos, is the executive director of the Nebraska Commission on Indian Affairs, and she worked on the state legislation to replace Nebraska’s two statues in Statuary Hall in the U.S. Capitol. [Every state has two statues.] Nebraska selected novelist Willa Cather and Chief Standing Bear, a leader of the Ponca Tribe. There is a whole federal process that you have to go through with the artist, the Architect of the Capitol’s office, and Congress—the maquette, the clay, the final cast bronze, then the installation and unveiling ceremony with the Speaker’s office. I was able to do all of that. My son, niece, and nephew went to the unveiling. Having our children see our tribal leader in the Capitol was a moment of pride and shows our resilience. I am currently working with the Willa Cather Statuary Hall Committee to finalize the bronze statue of Cather that is expected to be unveiled in 2022.”
Community service: “I served as president of the Native American Bar Association D.C. We focused on two areas: We had programming, speakers, and events to create new opportunities for Native practitioners in the D.C. area, and we tried to foster the Native American community and families. It’s hard to be away from home, away from our tribal communities, so we did a lot of fun family events to bring the Native community together. I am also passionate about my work as a board member of the Notah Begay III Foundation, which focuses on addressing Type-2 diabetes and childhood diabetes in Native children.
Honors:
Profiles in Diversity Journal, Native American Indigenous Leaders Worth Watching, 2021
Chambers USA, Native American Law, Up and Coming, 2021
Stark Ritchie Senior Counsel Award, 2018
Law360, Rising Stars, 2017
Native American Bar Association D.C., Excellence in Mentoring, 2017
Alpha Chi Omega Real Strong Women of Distinction Award, 2017
Bisnow, Top 40 Lawyers Under 40, 2016
National Center for American Indian Enterprise Development, Native American 40 Under 40, 2015