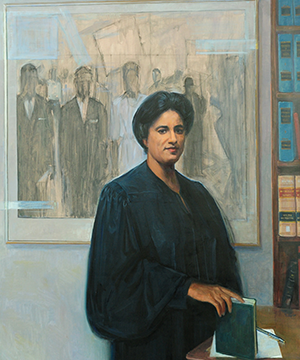 When President Lyndon B. Johnson’s White House announced the appointment of Columbia Law School alumna Constance Baker Motley ’46 to the federal bench in 1966, it used a single word to describe her in an announcement headline, according to a biographer who spoke at the Law School on April 29: “First.”

“Her curriculum vitae reads like a history of the modern civil rights movement,” said Gillian Lester, Dean and the Lucy G. Moses Professor of Law, at a reception held in Columbia Law School’s Drapkin Lounge to commemorate Motley’s career and to celebrate a portrait created in her honor by the artist Samuel Adoquei. “She never lost her determination to fight for equality for all members of our society.”

As an attorney at the NAACP Legal Defense and Educational Fund—and along with Columbia Law School Professor Jack Greenberg ’48—Motley worked for the plaintiffs in Brown v. Board of Education, the landmark desegregation case that led to a ruling rejecting the idea that schools could be “separate but equal.”

Motley argued 10 cases before the U.S. Supreme Court during her career at the NAACP, winning nine of them, including a ruling allowing James Meredith to become the first student of color to attend the University of Mississippi (the decision in the 10th case was later overturned).

Columbia Black Law Students Association President Aurra Fellows ’16 said at the reception that Motley “blazed a trail” for those who came after her.

“We are still trailblazing,” Fellows said. “The portrait will serve as an inspiration to us all, a reminder that anything you want to achieve is possible—we don’t have to accept the status quo.”

Columbia Law School faculty, students, and administrators mingled at the reception with Motley’s family, friends and former colleagues, including the actress Cicely Tyson. In addition to Dean Lester and Fellows, Motley’s son, Joel, and biographer, Tomiko Brown-Nagin, the Daniel P.S. Paul Professor of Constitutional Law at Harvard Law School, also spoke. Joel Motley thanked Professor Michael J. Graetz, who spearheaded the creation of the portrait but could not be in attendance.

After the reception, attendees were treated to a special screening of “The Trials of Constance Baker Motley,” a documentary Joel Motley has been working on with director Rick Rodgers. The film shows Motley’s humor and deft handling of the media storm surrounding her nomination to the federal bench. When a reporter asked her if a story’s description of her as tough but fair was accurate, Motley replied, “I read that in The New York Times this morning, and I’m sure they’re always accurate.”

In one clip, Harvey Gantt, whom Constance Baker Motley helped win admission to Clemson University as the first black student, said he could tell by the sound of her name that she was a force to be reckoned with.

“Constance Baker Motley,” he said. “That made her sound important before I ever laid eyes on her.”

Motley’s portrait will be displayed in the lounge outside Lenfest Café on the third floor of Jerome Greene Hall.