Greenberg Turns Attention To Plight Of The Roma

July 14, 2008 (NEW YORK) – Professor Jack Greenberg, (at left) whose civil rights legal work successfully challenged racism in the United States, is championing another cause – equal rights, integration and education for the reviled outcasts of Eastern Europe – the Roma.
The Roma have gained a formidable ally in Greenberg, the former director-counsel of the NAACP Legal Defense and Educational Fund, who for more than 35 years there helped litigate some of the most important cases of the civil rights struggle, including Brown v. Board of Education, the landmark school integration case.
“The Roma are despised and attacked in a way you don’t see here anymore,” Greenberg said. This summer, he sent Columbia Law School students Mary Kate Johnson who is a Human Rights Intern, Christopher Wlach, who is a Public Interest Fellow and Jennifer Sokoler to investigate the scope of the problem and the successes and failures of integration so far.
In 2003, Greenberg, Columbia Law School’s Alfonse Fletcher Professor of Law, was invited to speak at CEU Central European University in Budapest, Hungary to address the issue of integration because it had been mandated by the European Union in 2002 as a condition for the former Communist nations to join. 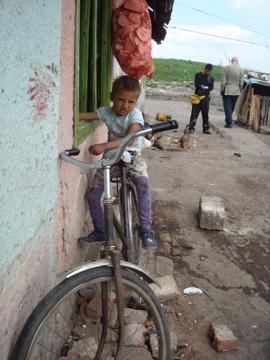 A child at a Roma settlement in Hungary that Prof.
Greenberg visited this summer.
(Photo credit: Jessica Greenberg)
The Roma are thought to have migrated to Europe from the Punjab region in India during the 1400s. What still remains a mystery is what drove them. They were enslaved in Romania and emancipated in 1865 about the same time as the slaves were freed in the United States. The European Roma population is estimated to be about 7 million, it’s difficult to gauge as many Roma won’t admit to their ethnicity for fear of discrimination. A 2005 UNICEF report found that 84 percent of Roma in Bulgaria, 88 percent in Romania and 91 percent in Hungary live below the poverty line. Greenberg also said that no more than two percent of Roma go to college and that unemployment is 100 percent in some communities.
In 2005, the governments of the countries with big Roma populations (Bulgaria, Croatia, the Czech Republic, Hungary, Macedonia, Montenegro, Romania, Serbia and Slovakia) agreed to develop national plans to address the Roma disparity in education, employment, health and housing and launched the formal “Decade of Roma Inclusion.” Its partner organizations include the World Bank, UN Development Program and UNICEF, The Open Society Institute and the Council of Europe. 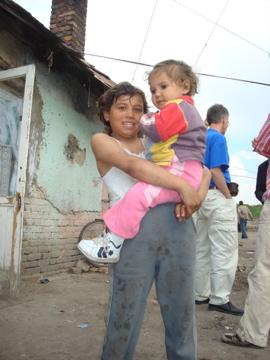 On his first visit to lecture at CEU, Greenberg visited two of the five towns in Bulgaria that had integrated their schools. A year later, he looked into integration’s progress. “Nothing had happened,” he said. That’s when he decided to help by providing research the advocates could use to work for change.
This past May, Greenberg visited Eastern Europe. During an interview about his project, he proudly wore a t-shirt from the Ambedkar School in Hungary, one of the schools that successfully educates teenage Roma. He described the progress of his team and even the societal resistance he has found: “Even among intellectual and educated people you say that’s what you’re working on and they say. Forget it.”
“You have no idea of how smart and productive these students are,” Greenberg said.
Sokoler said, “I was trying to find an internship that would allow me to explore a number of seemingly disparate interests – international affairs, civil rights, and education.” She said, “I knew that it was the right fit.” 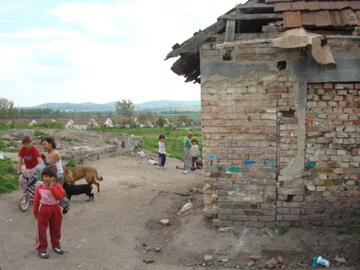 Johnson, whose travels this summer have taken her from rural Romania to Cluj, a Transylvanian university town to Bucharest said by email that she realizes now that she knew very little about what she was embarking to do. “I left New York with the typically American notion of the free-spirited, romantic nomad, and quickly learned that "Gypsy" is a dirty word in other parts of the world.”  She also wrote, “Their history of slavery and marginalization means that they squat illegally on land without utilities like electricity and plumbing, even without a local water source and without identity documents that would facilitate education, regular employment, and health care and doctors' records.”
Wlach felt prepared for what he would encounter this summer because of his experience as a Columbia undergraduate in SIPA and having had previous internships in Eastern Europe and yet he described the conditions he found at the Roma schools as “shocking.” Wlach described school buildings that lack window panes or frames; walls and ceilings that are crumbling; and schoolyards covered with garbage and graffiti.
“Most Roma students at these schools are far behind students at schools outside the community," Wlach said. "Many Roma students do not attend the schools or drop-out, while others graduate without basic reading or writing skills. Some haven't even learned the Bulgarian language.”
Wlach, Sokoler and Johnson will meet in Budapest in August to compile their research. Greenberg plans to write a law review article using their findings, by the beginning of classes this fall.
Greenberg has discovered a strain of nostalgia for communism among the Roma. One Roma woman described to him the “keys to a good life,” housing, work and school. “The last 20 years have been really bad,” she said. The Roma have lost what foothold they had. Another Roma woman called communism “paradise.”
In his Riverside Drive apartment, Greenberg read a description Johnson sent of a Roma settlement in Romania where the earthen-floored houses have no plumbing or visible source of water and where the families go outside when it rains, fearing the roofs will collapse. “I’ve never seen anything that broken-down and terrible,” Greenberg said. “The only thing that comes close is the South African shanty towns before Mandela.”
The parallels continue. “Like initial integration efforts in the U.S. which went one way – admitting black students into white schools – Roma schools are so broken down and decrepit the Roma just as soon get out to the white (European) schools,” Greenberg said.
“Blacks had a civic infrastructure,” he said. “For all its deficiencies there were institutions that kept the community together. And while the country was racist, there was a strong wing of the Democratic Party in favor of equal rights. You don’t have people taking a conspicuous position on civil rights for the Roma,” Greenberg said. “Not consistently, anyhow.”
Columbia Law School, founded in 1858, stands at the forefront of legal education and of the law in a global society. Columbia Law School joins traditional strengths in international and comparative law, constitutional law, administrative law, business law and human rights law with pioneering work in the areas of intellectual property, digital technology, sexuality and gender, and criminal law.