More than 170 Columbia Law School alumni and friends attended the “Law in a Global Society Symposium" held in London in celebration of the School’s 150th anniversary. 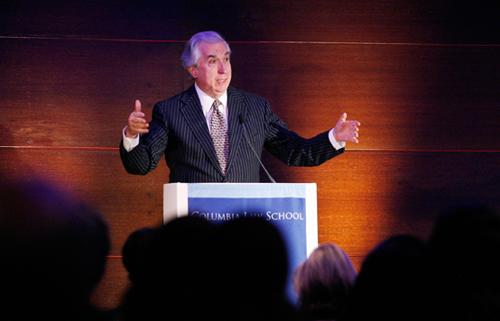 Coffee (above) stated his intention to examine the structural failures behind the world financial crisis, rather than assign blame to each player. "Let me suggest to you, we have to have a broader, more global perspective. And when we look at that more global perspective, let me return to my metaphor about the bubonic plague. Originally, the bubonic plague spread from the New World to Europe in the middle of the 16th century...The truth is, plague spreads only if there is high vulnerability in both the originating country and the recipient country," said Coffee.

The October 18th event also featured a keynote address by Lord Patten of Barnes titled “Tackling the New Global Agenda.” Lord Patten is a member of the House of Lords and served as governor of Hong Kong from 1992 to 1997 and oversaw its return to China. 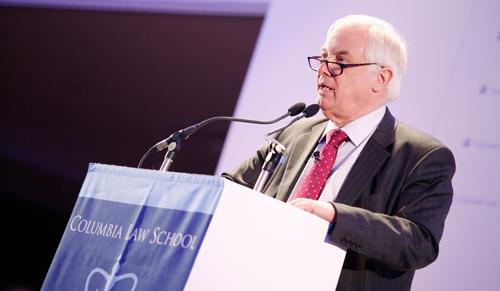 “Globalization has a good side and a bad,” Patten (above) said at the InterContinental Hotel, site of the Symposium. “The next American president is going to have to deal with many of the problems created by the dark side of globalization as well as by the financial crash.”

The Symposium's speakers commented on issues such as international intellectual property, aspects of the global economic crisis, human rights and terrorism. They reflect the School’s long-held commitment to teaching students to respond to a world that is increasingly integrated legally, economically, politically and socially. Columbia accomplishes this goal by developing new curricula and expanding its global alliances to create unique programs with academic institutions around the world. 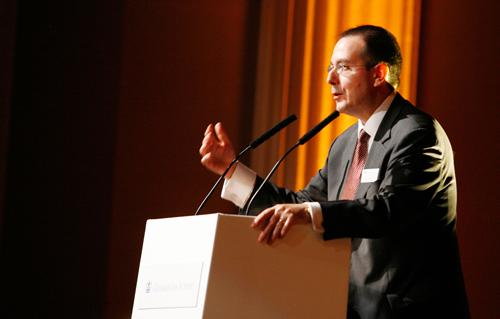 In his dinner talk, Dean David M. Schizer (above) drew upon the School’s history, as well as the scholarship of its current professors, to show the Law School’s consistent leadership and breadth of innovation in the legal world. After World War II, then-Professor Walter Gellhorn ’31 brought a cohort of Japanese attorneys to campus to teach them how to initiate post-war economic growth. Today, faculty members, such as Katharina Pistor, explore with their students ideas of how to address the current climate of global financial instability.

In the area of the School’s innovation, Schizer noted Professor Michael Heller’s new book The Gridlock Economy, as well as his own idea for a designated threshold tax on gasoline. Under Schizer’s plan, a gasoline tax would be levied only when the cost per gallon fell below a certain rate. The goal of the measure is not to raise revenue but to decrease consumption and encourage new energy technologies in a way that is more palatable to the public than a straight tax.

Attendee Ronald Freeman '64, co-chair of the International Advisory Board of Columbia Law School, said, “I find myself attaching increasing value to the education Columbia Law School offered me. I sometimes wish I could do my education over again, and events like these give me a vicarious taste of doing so.” 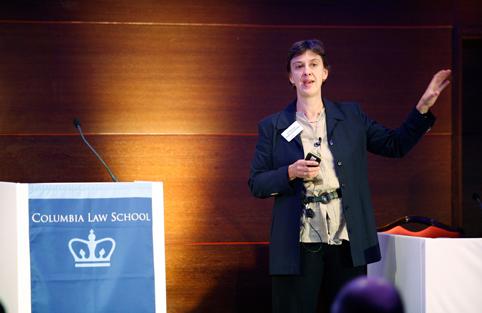 John Peracchio ’85 of Peracchio & Company, a management consulting and investment firm based in Detroit, Michigan area, attended numerous talks, including those by Professors Pistor (above), Coffee and Gordon. “I told Professor Pistor afterward that I wish she’d been teaching during my years at the Law School!” he said.

Both alumni attended Lord Patten’s speech and noted that his commentary about the world financial situation was tough and realistic, though Patten, chancellor of Oxford University and author of What Next? Surviving the 21st Century, tempered his comments by saying, “It is not a time for unrelieved gloom.”

Overall, the Sesquicentennial gathering was a fitting time to reflect on how the Law School grappled “with the great issues of our time,” said Schizer. “We are proud of our tradition of engagement with important questions, and this tradition continues today. We celebrate not only what our Law School has achieved in the past 150 years, but what we will achieve in the next 150 years and beyond, at home and in the world.”