Biden championed the 1994 legislation as a senator and continues to fight to prevent domestic violence and sexual assault.

As the deadline for reauthorizing the Violence Against Women Act (VAWA) looms, former Vice President Joe Biden, who championed the landmark legislation, came to Columbia Law School to talk about the law’s accomplishments – and the challenges that remain. “We need a gigantic cultural change in terms of the relationship between men and women,” he said at a Nov. 15 event organized by two student groups, the Domestic Violence Project and the Global Initiative against Gender Violence.

Speaking for more than an hour to a rapt audience of about 70 students, one of whom was his granddaughter, Naomi Biden ’20, Biden discussed his campaign to pass the 1994 law, which included presiding over what he estimated was 1,000 hours of testimony from experts and survivors of sexual assault and domestic violence. Most recently reauthorized by Congress in 2013, the law was set to expire at the end of September but was temporarily extended for 90 days as part of a spending bill signed by President Donald Trump. Since the passage of VAWA, which funds law enforcement training, rape crisis centers, shelters, and legal-assistance programs, annual reports of domestic violence have decreased by 64 percent.

Biden spoke softly for most of his remarks, having lost his voice, he said, while campaigning for 68 candidates in 23 states leading up to the mid-term elections (“Before you start laughing about that, if you’ve seen Barack lately, he can’t speak either,” he joked.). But he almost shouted his frustration at the sentiment still sometimes expressed by rape or domestic violence survivors—or by others—that a victim might somehow have done something to provoke an attack.

“What God-darn difference does it make what she was wearing or where she was?” he said, emphatically. “But that’s the cultural norm.” 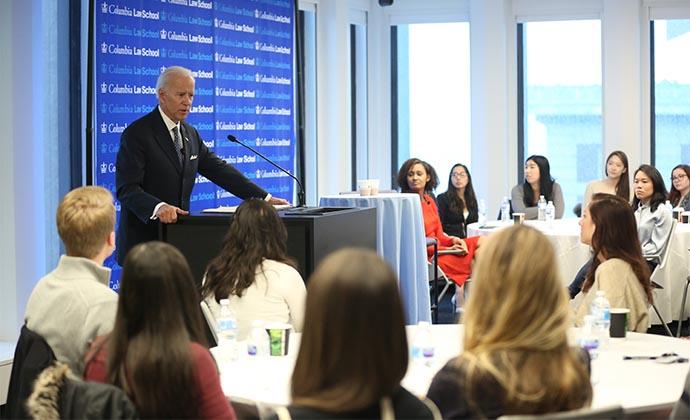 As a comparison, Biden noted how much society’s views on same-sex marriage have changed and referred to a famous 2012 “Meet the Press” interview in which he publicly declared his support for gay marriage even though President Barack Obama’s public view was still “evolving.” According to Biden, he had told Obama at the time, “I don’t need to evolve; I evolved a long, long, long time ago…If I’m asked, Mr. President, I’m not going to remain silent.”

Biden says the culture needs a similarly seismic shift in attitudes toward victims of domestic violence and sexual assault, and he urged students to get involved in the issue. “Women need advocates,” he said, noting that 83 percent of women who are represented by an attorney get orders of protection in domestic violence cases while only 32 percent of women without representation do.

“You know that old expression: To those whom much is given, much is expected,’” Biden said. “I expect a hell of a lot out of you.”

Biden’s talk had plenty of levity, too. He introduced himself by saying, “I’m Naomi Biden’s grandfather” and joked about his continued friendship with Obama. “All those memes are true,” he said, but “he made the first friendship bracelet, not me.”

Before the talk, Biden met with Columbia Law School Dean Gillian Lester. Calling her “a remarkable dean” and “an expert on issues facing the middle class in America,” Biden said he had sought Lester’s advice on legal policy.

Biden was introduced by Brittany Davis ’19 and answered questions from Davis about the work of the Biden Foundation and proposed changes to Title IX regulations governing how universities handle claims of sexual assault and harassment. Julia Nelson ’19 and Davis are co-presidents of the Global Initiative against Gender Violence. Christine Qin ’20, president of the Domestic Violence Project, also organized the event.