Prosecuting terrorism cases requires constant vigilance to ensure the powers of the federal government are not abused, said Joseph F. Bianco ’91, a former federal prosecutor who once oversaw the U.S. Department of Justice’s counterterrorism section as deputy assistant attorney general. 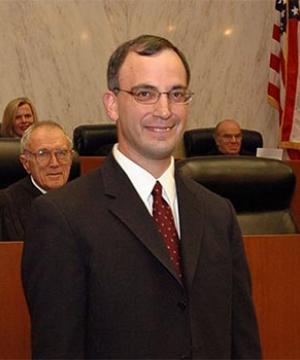 Bianco, now a federal district judge for the Eastern District of New York who was nominated by President Trump for a seat on the Second U.S. Circuit Court of Appeals earlier this month, spoke to Columbia Law School students and guests on Oct. 22 as part of the Columbia Federalist Society’s Madison Lecture Series.

In his talk, Bianco used trial exhibits from various terrorism cases he oversaw to illustrate some of the key elements of terrorism prosecutions, including the material support statute, which allows the government to prosecute anyone who gives money, supplies, or their own time to a designated terrorist organization; and material witness warrants, which allow the government to detain a witness if there is a risk the person will otherwise be unable or unwilling to testify.

Although he knew as a student at Columbia Law School that he wanted to be a federal prosecutor, Bianco originally intended to focus on mafia cases. And, he did, initially, when he joined the U.S. Attorney’s Office for the Southern District of New York in 1994. But, with the rise of Al Qaeda and high-profile attacks, including the 1998 embassy bombings in Kenya and Tanzania, he soon found himself working on terrorism-related matters.

The Southern District, where Bianco eventually became deputy chief and then chief of the organized crime and terrorism unit, became a hub for terrorism prosecutions, even when the connection to the district’s geography was remote: Bianco said international suspects were flown into Stewart Air National Guard Base in Newburgh just to give the district jurisdiction. In his time at the Southern District between 1994 and 2003 and later as deputy assistant attorney general between 2004 and 2006, Bianco worked closely with then-FBI Director Robert Mueller, then-future FBI Director James Comey, and current FBI director Christopher Wray. After leaving the Southern District and before joining the Department of Justice in Washington, D.C., Bianco worked for a year as counsel at Debevoise & Plimpton.

“My kids like to say that’s the year we were rich,” he joked.

Bianco worked on some of the highest-profile cases of the era, including 9/11; and the prosecutions of attorney Lynne Stewart, convicted of smuggling messages for Sheikh Omar Abdel Rahman, who was linked to the 1993 World Trade Center bombing; the so-called “millennium bomber,” who was convicted of targeting Los Angeles International Airport; and Ihab Ali, a U.S. citizen whom the government sought to question in its investigation of Osama bin Laden.

One challenge in prosecuting terrorism cases, Bianco said, is the difficulty in getting witnesses from other countries or classified evidence—in favor of the prosecution or the defendant—into U.S. courts.

“When you’re given all these law enforcement powers, you have to be very careful,” he said.

Bianco engaged students throughout the talk—asking them to identify potential challenges in the cases he described and walking them through actual evidence from the files, including the order signed by President George W. Bush designating U.S. citizen Jose Padilla an “enemy combatant.”

Before the talk, Tyler Becker ’20 introduced Bianco, noting his recent nomination to the Second Circuit; his 2006 appointment to the Eastern District by Bush; and his time at Columbia Law School, where the judge was a James Kent Scholar and a member of the Columbia Law Review.

Bianco credited his career to the foundation he received during his time on campus.

“I’m always especially happy to come back to Columbia Law School where it all began,” he said.