A much talked about speech from former Attorney General Holder. 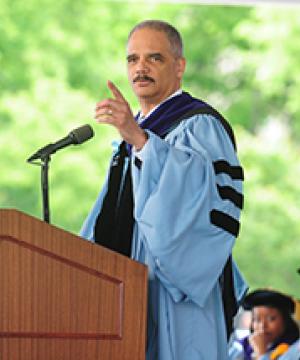 Only months before Eric H. Holder, Jr. ’76 resigned as U.S. Attorney General, he delivered a memorable speech honoring Martin Luther King Jr. The nation’s top lawyer not only used the 2015 occasion to celebrate King as a  “lifelong champion for equality, for peace, and for justice.” Holder also spoke of the work that has yet to be done and urged a candid, “constructive” dialogue on race and policing, one that would begin with better reporting of use of force by police, as well as officer fatalities.

“So today, once again, let us not shy away from—but embrace—the noisy discord of honest, frank, and vigorous debate. Never forget—this great nation was born of protest—by residents of this land who took to the streets to demand fairness from those who governed them. Let us never fail to support those who wear the badge, or to work alongside them in building a constructive dialogue—a dialogue founded on our common humanity. Let us act on the crucial recognition that those who serve with honor serve greatly—and they deserve our deepest respect. And let us reject the empty rhetoric of anyone who would engage in cynical attempts to divide and cast blame—choosing instead to affirm once more that Americans from all backgrounds and perspectives must come together to be part of positive change.

“In this great country—a nation of laws and of high ideals—we have always had the power to forge our own future. Dr. King’s example offers inspiring proof of this fact. And that’s why, as our present work unfolds—so long as we continue to rely on the engagement of our citizens, the ongoing commitment of our police officers, and the singular expertise and experience of leaders like you—I believe there is good reason for confidence in where this effort will take us.”

Now a partner at Covington & Burling, Holder gave the 2016 graduation speech at Columbia Law School (top photo). Urging students to keep “pulling this great country closer to our founding principles,” Holder also said, “Your obligation, as Columbia lawyers—and your breathtaking opportunity: Not to ‘Make America Great Again,’ as some would have you believe, but to keep making America greater than it has ever been before.”

Listen to Professor Richard Briffault on Bloomberg Radio discuss another Holder speech in which he lays out the political risks of racial gerrymandering.