Press contact: Erin St. John Kelly [email protected]
212-854-1787/Cell 646-284-8549/Public Affairs Office 212-854-2650
September 26, 2008 (NEW YORK) – When Professor Karl P. Sauvant considers Columbia University’s place in the world, he sees a role that goes far beyond the classroom. “It is not only about theoretical work and learning and teaching,” said Sauvant, who is the executive director of the Vale Columbia Center on Sustainable International Investment, “but also to see how some of those things can be applied practically to make a difference in the lives of people.”
That philosophy was evident on September 19 as the Vale Columbia Center and The Earth Institute at Columbia University unveiled the Investor’s Guide to São Tomé and Príncipe, a prospectus aimed at assisting the tiny West African nation to attract foreign direct investment.
About a decade ago, the potential for oil was discovered in the country, leading to what Professor Jeffrey D. Sachs calls “the oil curse.”

“Will it help the economy or wreck it?” said Sachs, Director of the Earth Institute. “When small countries discover wealth they often waste it with massive corruption or have huge internal political fighting or even violence.”

About three years ago, Sachs said he was asked by São Tomé and Príncipe’s president, Fradique de Menezes, to help the 386-square mile nation. How can the 160,000 people who live on two islands in the Gulf of Guinea profit from potential oil, but also encourage other development, strengthen infrastructure and address social problems? he asked. 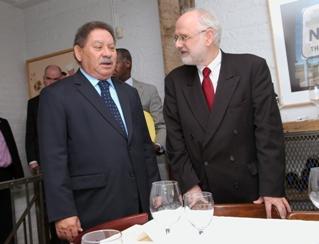 To celebrate the release of the investment guide, Sauvant (above, right) and Sachs organized a dinner with the country’s president in New York City on September 22, which was also the first day of the United Nations General Assembly. After his arrival, to a round of applause from about two dozen guests, de Menezes (above, left) thanked the group. “This is a document that can open many doors for us,” he said.
Sauvant agreed. “Investment is the basis for economic growth and that, in turn, is the basis for social development,” he said. “While investment is not everything, everything is nothing without investment.”
The prospectus describes the history of the island, which was a Portuguese colony until independence in 1975. It details the country’s assets, such as a rich history of cocoa production – the country’s leading export – and a lush, unspoiled landscape ideal for tourism. It also describes a host of incentives, such as a 50 percent reduction in corporate income tax for the first seven years of a project.
As for oil in São Tomé, Sachs said that initial test wells so far have not produced “the gusher” that had been hoped for. The country, he said, needs to focus on agriculture, like cocoa production, and other resources, like fishing.
“At The Earth Institute we’re interested in fighting poverty in general so São Tomé poses a lot of very important questions that go beyond the oil sector,” Sachs said. “How do you fight malaria? How do you promote investment in a country that is not known?”
The Earth Institute has also put together investor’s guides to the African cities of Kisumu in Kenya and Kumasi in Ghana as part of the Institute’s Millennium Cities Initiative, as well as a guide for the nation of Liberia.
While investing in a country like São Tomé is filled with opportunity to make social change, Sauvant said projects will only be viable in the long term if they are also profitable. “I don’t have any problem going to a company and saying it would be really nice if you would invest in this country out of the goodness of your heart,” said Sauvant. “But it’s not sustainable in the sense of a company really staying in for the long run.”
Niovi P. Christopoulou ’04 heard about the dinner event from a former Columbia Law School classmate. As an attorney with the New York firm Dechert, she currently represents several Greek shipping companies that do business in neighboring Nigeria, and was curious to learn about São Tomé’s potential. “I want to find out more about it,” she said. “I think it would be an interesting opportunity because it is democratic and safe.”

Florizelle B. Liser, the assistant U.S. Trade Representative for Africa, brought an interesting perspective. She noted that Africa, as a whole, only contributes about two percent to world trade. If that amount were increased by just one percent, it would generate about $70 billion, more than three times the amount of aid the continent receives worldwide. “We’re not saying there is no need for aid, but trade is a much greater economic engine,” she said.

In a question-and-answer session during dinner, President de Menezes talked about how he’d like to add flights to the country beyond the existing twice-weekly service. He said he would like to expand trade to other West African countries, noting that neighboring nations consume thousands of tons of dried fish annually.
De Menezes talked about the future of construction of a deep water port by the French shipping giant CMA-CGM. Because of São Tomé’s political stability, its port will be even more attractive to companies looking to ship in the West African region, he said.
De Menezes admitted the country’s infrastructure was weak and local farmers struggled to price products like cocoa beans for maximum profit. When asked whether his nation had a 30-year plan, he wryly noted that if his country could draft such a plan, it would not have needed Columbia University’s assistance.
He discussed the difficulties in encouraging commercial growth in a country where people are often suspicious of the private sector and have long relied on government ministry jobs. At one point de Menezes looked to Jan Hartman, his special advisor and former country coordinator for The Earth Institute, and asked her to translate his Portuguese: “If the private sector becomes powerful they are afraid everyone will leave the ministry [jobs] and go work in the private sector,” Hartman said.
African trade representative Liser noted how the private sector can have a big advantage in Africa as São Tomé is one of 34 countries that enjoy duty-free access for many products to the US market. She also explained how the private sector can make a big impact. She mentioned how a small jam maker from Swaziland joined the Fancy Food Show, an annual trade show that comes to New York City. The company went from few exports to a deal with Whole Foods shipping out a container-full of product each month.
“I’d like to see your chocolate there next year,” Liser said. And with that, she and São Tomé’s foreign minister, Carlos Tiny, exchanged business cards, perhaps paving the way to one of many deals to come.