Every few years an incident of police brutality or misconduct in New York is so egregious it attracts national attention. These incidents often raise questions about police behavior, from firearms training to undercover operations to the unwillingness of police to report wrongdoing at the hands of their fellow officers.

But, in between these high-profile incidents are tens of thousands of ordinary interactions between the 36,000 officers of the New York Police Department and the eight million people they serve. Most are respectful and cordial, though some call into question an officer’s professional behavior.

For the past three years, a small team of Columbia Law School students has focused on these latter cases, doing the slow, steady work of documenting and reporting allegations of police misconduct. The students are put in contact with complainants through the Community Oversight of Police Program (COPP) established in 2004. Their mission is to help complainants of alleged abuse navigate the bureaucracy of the Civilian Complaint Review Board (CCRB) – a 13-member group that looks into police misconduct – and to provide legal representation at CCRB hearings. While police officers are represented by counsel or a union representative, complainants are sometimes low-income New Yorkers who cannot afford a professional advocate. COPP works under the auspices of New York Lawyers for the Public Interest (NYLPI) and the New York City Policing Roundtable, a group of academics, attorneys and activists interested in police issues.

“A lot of people are intimidated or have a difficult time managing the CCRB process,” said Bridget Kennedy ’07, who served as student coordinator for the program. “It was our hope that clients would file complaints or follow up more if they had us with them.”

New York City’s oversight of the police department is the most extensive in the nation, developed over 50 years of changing thought on the relationship between the police and communities.   The first board that reviewed police misconduct was made up of three deputy police commissioners. In subsequent years, the composition of the board changed to include civilian representatives. Mayor David Dinkins and the city council created the all-civilian board in 1993.

Even with greater civilian influence, the CCRB investigates fewer than half of the allegations of misconduct brought to its attention and recommends disciplinary action in approximately seven percent of incidents it does investigate. Civil rights attorneys argue that the agency is unresponsive to community concerns and presents administrative barriers to a full airing of citizens’ complaints.

This past spring Kennedy and Carolijn Terwindt ’12 J.S.D. helped prepare complaints for residents of a public housing development who said they were being harassed by the overly aggressive enforcement of trespassing and loitering laws. Residents told COPP volunteers they are ticketed and sometimes arrested in front of their own buildings if they can't produce identification; other tenants complained that police prevent them from gathering in public areas, Terwindt said.

“Residents tell us they don't feel protected by the police,” she added. “They really feel limited in where they can go and what they can do.”

“People hear about the Sean Bell cases, but they don’t hear about the kids who are stopped [by police] every time they come home,” said Kennedy, who testified before a city council hearing on police oversight.  (Bell, an African American, was unarmed when shot and killed by plainclothes New York Police Department detectives investigating reports of a gun threat in November 2006.)

With the students’ assistance, a cohesive, factual and targeted complaint takes shape from amid angry and sometimes muddled allegations.

“We prep the witness, or client, before the hearing. That’s where a lot of the work comes in. It helps a lot to get people to focus on the incident at hand,” Kennedy said, explaining that some clients have mental illnesses that undermine the effectiveness of their presentation but, she argues, shouldn't bar them from gaining justice if they were wronged.

The CCRB has received more than 5,000 complaints each year since 2003, according to CCRB status reports. Fewer than half are investigated, and nearly all the rest are not followed up because the complainant abandons the case or refuses to make a statement. In cases that are pursued, CCRB hears evidence and decides which ones to refer to the police department for disciplinary action. The CCRB’s recommendation for disciplinary action is purely advisory – the NYPD is not required to follow its suggestion.

COPP students also accompany clients to hearings, and send the board a follow-up letter reiterating the evidence in the complaint and the findings from the hearing, Terwindt said. The CCRB moves at a glacial pace, taking an average of nine months to investigate and rule on a complaint, according to the CCRB report. The public housing case has been heard by a CCRB investigator, but no determination of culpability has yet been made.  Students are documenting instances of alleged harassment at the housing development and plan to make a mass complaint to CCRB or publicize their findings elsewhere in the fall, Kennedy said.

Kennedy, who after graduation joined the Federal Defenders of San Diego, estimates that COPP has helped 65 complainants since its inception and referred hundreds of others to more appropriate services. Their work gives them real world experience of advocacy, client interaction and evidence gathering. That is precisely the experience Adrienne FitzGerald, pro bono and programs coordinator of the Center for Public Interest Law, hopes students will carry with them after they graduate. COPP is unique among the dozens of Columbia Law School public interest and pro-bono projects because it was shaped and led almost entirely by students and because it combined personal client advocacy with a broader analysis of the workings of a government agency, FitzGerald said.

“We wanted the students to both look at a social problem that was important – police brutality – and to look at a government initiative that wasn’t working. We wanted to see if the [CCRB]... functioned the way it had been envisioned,” she added. “This project has been great because it hits on a number of skills. There is the one-on-one advocacy and all the intake skills of strong listening. But then it required macro skills, more ongoing support and the analysis, such as, ‘Are we affecting this agency?’” 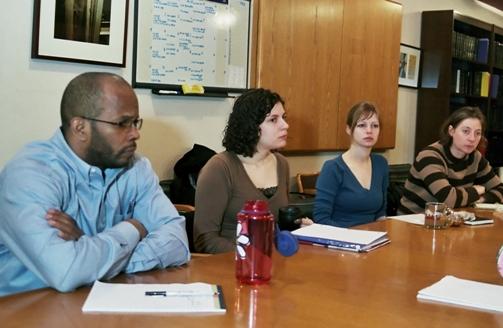 Eileen Markey, a freelance reporter based in the Bronx, writes about criminal justice, urban environmental issues and religion.