The initial work of a Columbia Law School class that intends to draw nonpartisan maps of all 435 Congressional districts is now online. The maps can help states draw boundaries that will stay in place for the next decade.

Students in the groundbreaking Redistricting and Gerrymandering class, taught by Professor Nathaniel Persily, have posted proposed maps for 10 states, with more on the way this semester.
“This is the first time any group has tried to create an online database of Congressional maps for the entire country,” said Persily, the Charles Keller Beekman Professor of Law and Political Science and one of the nation’s leading experts on redistricting.
Visitors to the website DrawCongress.org can click on pushpins to view maps for states where redistricting plans have been uploaded. All plans attempt to comply with applicable state and federal laws, including the requirement of one-person, one-vote and the Voting Rights Act of 1965, Persily said. 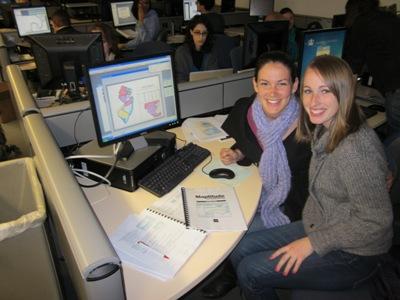 Kristine VanHamersveld '11 and Jessica Riggin '11 at a January training for the redistricting software. The pair have drawn a redistricting map for New Jersey and will next take on Calfifornia.

While the maps are nonpartisan, there are several variations with different principles behind the construction of each map. For example, there are so called “GooGoo” or “good government” maps. They attempt to represent boundaries based on political subdivisions, such as cities and counties, rather than the often-serpentine boundaries drawn up by partisan mapmakers to strengthen a party’s power base. Another variation is “MaxCom” maps, which maximize political competition by creating as many districts as possible evenly split between Republicans and Democrats.

Persily, who redrew district lines for Georgia, Maryland, and New York, following the 2000 census, said the aim is to provide states with legally defensible maps that can potentially save them millions of dollars in consulting and legal fees.
This is the first semester the class has been offered and Persily ensured the students got to work right away. In January, some class members traveled to Washington for a meeting of the National Conference of State Legislatures, where they ran a computer simulation of a redistricting for dozens of newly elected state legislators and their staffs.

“The students were, in effect, teaching the very people who will help determine the new district boundaries,” Persily said. For more information, visit www.drawcongress.org. 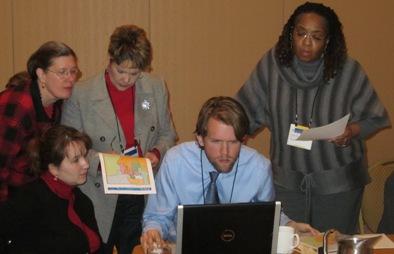 Paul Smith '12 (center) runs a simulation of the redistricting software during a January conference in Washington for new state lawmakers and their staffs.