Is Brazilian Democracy Under Threat? 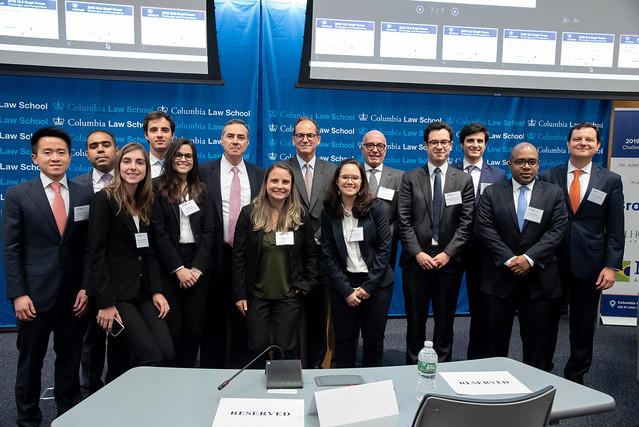 In the wake of Brazil’s massive corruption investigations and the election of a conservative populist president, international legal scholars at the 2019 CLS Brazil Forum addressed whether the 30-year-old constitutional democracy—and democracies elsewhere—are under threat.

Brazil elected far-right president Jair Bolsonaro in January, following a tumultuous period in which President Dilma Rousseff was impeached and a corruption investigation dubbed “Lava Jato” or “Car Wash” resulted in the jailing of two other former presidents and indictments of Brazilian legislators. Law professors Mark Tushnet of Harvard Law School and Samuel Issacharoff of the New York University School of Law attributed the rise of populists like Bolsonaro and President Donald Trump to weakened legislative branches and the erosion of political parties. Issacharoff added that social welfare programs or targeted tax breaks then devolve into “clientelism” or financial rewards for the political base.

Columbia Law’s Jamal Greene, the Dwight Professor of Law, contrasted the constitutions of the United States and Brazil: The U.S. Constitution is a short “framework” constitution that “describes a political architecture,” doesn’t specify rules for such functions as voting or Congressional oversight, and is hard to amend. On the other hand, Brazil’s constitution is long, detailed, and heavily amended, and it is forged in a “post-conflict society” that followed Brazil’s return to democracy in 1988 following military rule. Brazil’s constitution includes “a whole host of quite detailed rules’’ that in the United States are spelled out in legislation or federal regulations, Greene said. The Brazil Constitution “doesn’t leave these kinds of details solely to politics,” he said.

The result, Greene said, is a kind of “Frankenstein constitution. And I say that in the most adoring way.”

Greene warned that U.S. political norms have broken down sufficiently that the framework constitution may no longer be sufficient to the task. “There is a widening gap between the democratic order that the U.S. Constitution presupposes and the one that it governs,’’ he said. If the Constitution is like a chain novel to which each president may add a chapter, Greene said, citing constitutional scholar Ronald Dworkin, President Donald Trump “is just writing his own text, describing the existing text as being inadequate.”

Justice Barroso reminded the audience that despite the upheavals, no one in Brazil has suggested any other system than the current democratic one. Brazil has resisted “threats that in other times would have brought the constitutional framework down,” Barroso said. In addition, the country has overcome the monetary instability and hyperinflation of the early 1990s, and lifted tens of millions of Brazilians out of poverty with the “Bolsa Familia” social welfare program, he said.