The Perkins Coie partner fought for marriage equality and calls protection of voting rights “imperative for our democracy.” 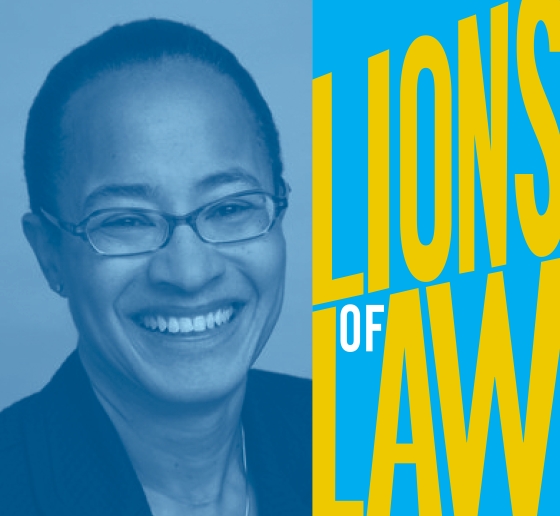 In 2004, when San Francisco Mayor Gavin Newsom decided to begin allowing marriage for same sex-couples at City Hall, Bobbie J. Wilson ’90 was on the team that defended the decision before the California Supreme Court.

“Sitting there, watching the justices, all I could think was, ‘We’re going to get our asses kicked,’” she recalls.

She was right: The court said Newsom had overstepped his authority, and it was four years before marriage equality was assured by the California court. But without San Francisco’s action, Wilson says, winning marriage equality would have taken a lot longer.

Wilson, a partner at Perkins Coie in San Francisco, has learned to recognize when the fight is worth it, even if the odds are long.

In her career as a litigator, she has moved from employment law to intellectual property and class action representing technology companies. She has battled against voting restrictions in Wisconsin and led a team investigating workplace misconduct at Uber, which required examining hundreds of thousands of internal documents. She serves on her firm’s executive committee and co-led its national diversity, equity, and inclusion (DEI) committee, fighting against the slow progress for Black and other lawyers of color, as well as women and LGBTQ+ people in the profession.

“The workplace is changing, but there’s still too much of that ‘bro’ culture at tech firms, and there’s still difficulty with women getting the attention of venture capital firms,” Wilson says.

When she graduated from Columbia Law School, ​​“my passion was to ensure increased access to justice for people who had traditionally been marginalized,” Wilson says. “In the early days, I would take on cases entirely because it was the right thing to do, even if I was going to get beat up. . . . I still have a passion for [seeking justice], although I’m more practical now.”

Raised in New York City, Wilson worked her way through Queens College as a polygraph examiner and private investigator while attending classes at night. The TV legal dramas she watched as a child inspired her to become a lawyer.

When she arrived at Columbia, in 1987, Wilson says she was overwhelmed. Still, she thinks her background and her longer runway to law school matriculation gave her a perspective that she calls “crucial.”

“[My classmates] were sweating the small stuff. And usually the small stuff was grades,” she says. While she understood the importance of 1L grades to prospective employers, she had bigger concerns. “There have been times I had to borrow money to pay my monthly rent. Now, that’s important. It really helped me not to feel the pressures that a lot of first-years felt.”

Racking up some life experience outside the legal field ultimately helps your clients, Wilson says.

“Law isn’t just about learning what constitutes a breach of contract or what invalidates a patent. The counselor part of being a lawyer means you have to advise people,” she says. “Just because a client can do something doesn’t mean a client should do something. Even if the client is within the letter of the law, does it mean that a lawsuit or a particular contract is the best way to accomplish the business purpose? I found that my experience outside law school gave me a leg up in that kind of experience.”

Wilson found her first law firm home by sheer chance—or maybe kismet. Waiting for a summer job interview in 1989, she passed the time reading a National Law Journal article. The story recounted how, after the death of one of its lawyers from AIDS, the firm Howard Rice Nemerovski Canady Falk & Rabkin (now part of Arnold & Porter) had persuaded the San Francisco Chronicle to change its discriminatory policy and include the man’s life partner as a survivor in its obituary. A lawyer at the firm, Therese Stewart, was quoted in the article.

“She talked about how she had come to Howard Rice as an out lesbian, and I was immediately intrigued,” Wilson recalls.

Wilson glanced up at the list of law firms interviewing for summer associate positions and saw an interview slot for Howard Rice—at that moment. She raced to the appointment and discovered the interviewer was a Black woman, Natalia Combs Greene (now a senior judge in the Superior Court of the District of Columbia).

“We hit it off right away,” Wilson says. “It was like it was meant to be.”

As a partner at Howard Rice, Wilson litigated the San Francisco marriage cases with Stewart, then chief deputy city attorney. (Stewart is now a California appellate judge.) Wilson calls the case her proudest moment. “The Brown of her time.”

“Trina and I knew that if we wanted to get married, this was our moment to do so,” Wilson recalls, “because it was clear we were going to lose the vote.” Wilson had been responsible for gathering declarations for evidence in the marriage case. As a result, she says, “I knew how people felt about that word, ‘marriage.’” Proposition 8 was subsequently found to be unconstitutional, and the U.S. Supreme Court affirmed marriage for same-sex couples in 2013.

Trina, who died in 2021 after a heroic battle with cancer, was Wilson’s nonlawyer “tester’’ for litigation arguments. “I’d say, ‘Let me try something out on you.’ And if she cocked an eyebrow, I went back to the drawing board. She had this amazing ability to say, ‘No one’s going to buy that’ or ‘That’s not going to resonate with folks.’”

In 2010, Wilson moved to a partnership position at Perkins Coie, departing the firm where she’d grown up as a lawyer. The move was like leaving home, she says—hard but necessary. “To your parents, you are always the child. It’s the same thing in law firms. They don’t necessarily treat you like a partner because you’ve grown up there.” Making a lateral switch to a new firm means new partners “only see you as that partner.”

From co-leading Perkins Coie’s DEI committee, as well as from her own experience as a Black lesbian, Wilson knows how slowly demographic change is happening in Big Law firms. The numbers of partners of color and women, she says, are “terrible. It is difficult for people in power to give up power.”

But Wilson believes change is possible. She cites law firms’ years of resisting women lawyers’ desire for flexibility when they have young children until COVID hit.

“And guess what? All of a sudden, firms were saying, ‘Sure, you can have flexibility. Sure, you can work from home,’’’ Wilson says. “It was always doable, but firms just didn’t want to do it. And I maintain the same thing [is true] for getting more people of color in the profession and in the partnership.”

Partners, Wilson says, need to extend the informal help they have always given white male associates—invitations to drinks or the club, business referrals, cutting slack on a screwup—to female associates and associates of color. “If they really did the work on race and bias and took that to heart, we wouldn’t still be having these conversations about the lack of diversity in the legal profession.”

In 2016, Wilson represented in federal court a Wisconsin voting rights group opposing changes to the state’s voting laws, including a photo ID requirement—a case that reinforced for her the importance of defending voting rights.

Now, having returned from a leave to care for her wife, Wilson is planning to renew her focus on voting rights, a longtime practice area for Perkins Coie. Protecting voters’ ability to register and cast votes is “imperative for our democracy,” she says.

The wave of laws restricting voting methods, such as drop boxes and early voting, and laws requiring specific kinds of photo identification have real effects on voter turnout, Wilson says.

“It’s all these little things that prevent people from voting. Each restriction in itself doesn’t seem like a big deal, but cumulatively, they have a huge impact. A lot of that is lost on the public, so it is tolerated, and it doesn’t seem like it’s that important to fight for, and it’s disheartening.”

But Wilson relishes long odds and tells young lawyers they should, too.

It’s always worth pitching the case, even if it looks like a steep hill to climb, she says. To take on the marriage cases, in which Wilson represented the city and county of San Francisco, Mayor Gavin Newsom, and Assessor Mabel Teng pro bono, she had to get approval from Howard Rice.

“Young lawyers who want to take on a pro bono fight shouldn’t assume just because you’re Big Law that [your firm] doesn’t care. Many times, if you want to do it, the sky’s the limit,” she says. “Big Law has incredible resources, and you can use these resources to benefit people who don’t normally have access to justice.”