Established in 2015, the need-based scholarship is awarded annually to a Columbia Law School LL.M. student, with priority consideration given to students who are from Africa, Latin America, Asia, and Eastern Europe and demonstrate academic success and promise.

Growing up in Kenya, Kifaya Abdulkadir Ibrahim ’22 LL.M. witnessed human rights violations and was inspired to pursue a career in law, which she saw as a remedy to those abuses. “The lack of access to a fair and unbiased justice system is a major impediment to the socioeconomic growth of developing countries, especially for countries transitioning from conflict,” she says. Ibrahim was compelled to do something to make a difference and “was certain that the law would be the best starting point.”

While earning an LL.B. at Strathmore Law School in Nairobi, she immersed herself in projects in areas such as legal aid, corporate law, legal work in the energy sector, and litigation. Ibrahim naturally gravitated toward human rights work and, after practicing law in Kenya for several years, decided to expand her knowledge about the law and experience working in human rights. Receiving the Baker McKenzie Scholarship for the 2021–2022 academic year, she says, enabled her to achieve those goals at Columbia Law School.

“Pursuing my LL.M. at Columbia Law gave me an unrivaled opportunity to learn more about social justice and human rights in a focused academic environment,” she says.

“This scholarship was established to support students like Kifaya,” says Anna Brown, chief inclusion and diversity officer at Baker McKenzie. “We’re thrilled she was able to fulfill her dream of attending Columbia Law School and look forward to following her legal career.”

Ibrahim took full advantage of her LL.M. year. She externed with The Action Lab in partnership with the Center for Popular Democracy, where she researched constitutional reform in the United States. She was also one of only 10 externs selected to work at UN Women, where she analyzed reports from conflict zones and worked on issues at the intersection of human rights and gender. “There was no better place for me to become a stronger human rights advocate and to learn how to navigate the international human rights field than in New York,” she says.

Ibrahim also enrolled in courses to learn about new and emerging legal tools for safeguarding human rights. As an undergraduate, she took a class that examined the legal challenges associated with technology, and she grew “increasingly interested in the intersection of technology and human rights especially with regards to data privacy,” she says.

At Columbia Law, she took two courses with Professor Eben Moglen, whom she describes as “a pioneer in technology and privacy law.” Law in the Internet Society and Computers, Privacy, and the Law enabled her to broaden her understanding of how privacy law functions in different countries and how it affects human rights efforts.

“Kifaya is an outstanding example of the new global privacy practitioner training at Columbia,” says Moglen. “Privacy practice is now inherently multinational, and for clients to be successful in managing their risks, it must be multicultural as well. Kifaya and her contemporaries will be transforming the fundamentals and the details of privacy law around the world in the next decade,” he says.

“Privacy rights are human rights,” says Ibrahim, who plans to incorporate both areas into her legal career. “And I think that it’s important to have human rights advocates in the technology and privacy fields to ensure that even as we digitize the world, we do so ensuring that human rights are of paramount importance.” 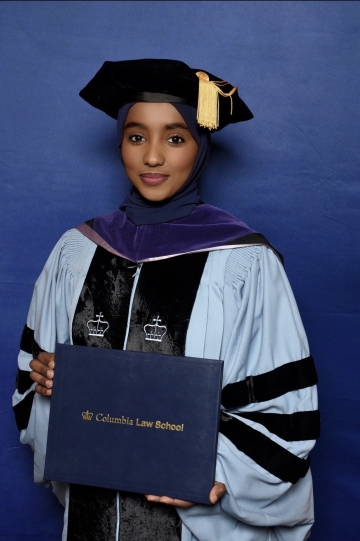 The summer has provided her a moment to reflect on her LL.M. experiences (“I already miss being at the Law School,” she says) and her motivations for dedicating her legal career to defending fundamental freedoms, including the right to privacy. As a first-generation law student, Ibrahim is keenly aware of the sacrifices of Somali women who came before her—those, she says, who were forced to live a life they had no agency over but who also made possible the opportunities she has had. “I owe it to the past generation to acknowledge what they did for my life to be different from theirs and to carry on their work,” she says. “And I owe it to the next generation to prepare a better life for them.”