Appeals Court for the Federal Circuit Holds Court at CLS

Press contact:
Erin St. John Kelly 212-854-1787
Cell: 646-284-8549
[email protected]
Ralph W. Burnside, Senior Inspector with the United States Marshals Service, stood smartly at attention in the classroom-turned-courtroom for a day and, promptly at 10 a.m., announced, “This is a legitimate session of the court and this is a very big honor,” as if there was any doubt.
The assembled that morning in Jerome Greene Hall at Columbia Law School were warned that they would drink, read newspapers or leave cell phones on at peril of admonishment directly from the bench. With a “good luck in your careers,” he ceded the floor to court room deputy Reginald Walker, who then officially called the United States Court of Appeals for the Federal Circuit court to order.
Columbia Law School students had a rare opportunity October 4th to watch real cases argued before judges Arthur J. Gajarsa, Alan D. Lourie and Sharon Prost. It was the court’s first visit to Columbia Law School and the audience of 300 students and faculty heard the appeals of three very disparate cases. 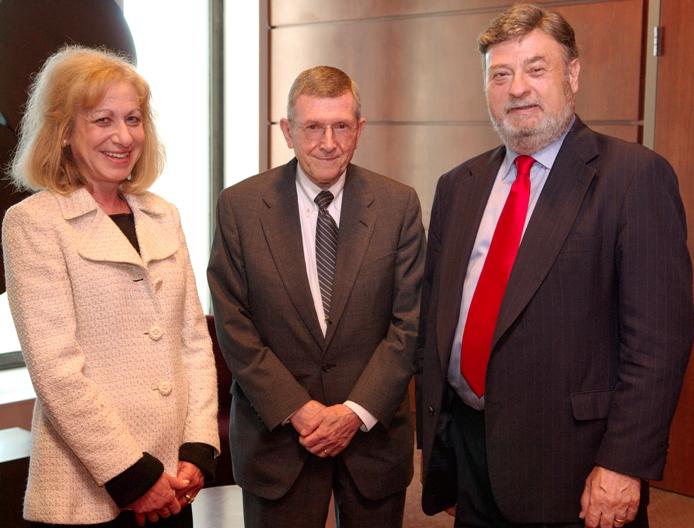 Judges Sharon Prost, Alan D. Lourie, Arthur J. Gajarsa of the U.S. Court of Appeals for the Federal Circuit during their visit to CLS.
The court, established in 1982 when the U.S. Court of Customs and Patent Appeals and the appellate division of the U.S. Court of Claims were merged, is based in Washington, D.C., but traditionally travels the first week of October. It has nationwide jurisdiction in many and diverse subject areas including international trade, government contracts, patents, trademarks, certain money claims against the U.S. government, federal personnel and veterans’ benefits. At Columbia, three cases were heard: Samuel Aaron v US, a customs dispute; American Federal v U.S. a damages suit remaining from the savings and loan crisis; and Baxendale v Department of Veterans Affairs, a veterans claim.
“At best, it will be ten to twelve years before the court again sits in New York. So it was the once in a decade chance for a very large group of Columbia students to see together an appellate argument done for real. It's very different from a moot court argument,” said Professor Harold Edgar, Julius Silver Professor in Law, Science, and Technology,who invited his patents class to attend.

Prof. Harold Edgar chats with Judge Sharon Prost at lunch following court session at Columbia Law School.
Edgar said the appeals were interesting for a number of reasons. “I don’t, and most academics don’t, stress enough how crucial to the actual resolution of litigated disputes are burdens of proof, characterization of issues as ones of law or fact, and standards of appellate review. When you see real appeals, these problems leap out at you.” Students also witnessed some courtroom flourish when the plaintiff’s lawyer in Aaron summed up his case with a paraphrase of Lewis Carroll: “Just because the government says they’re right, doesn’t mean they’re right.”
At the lunch that followed the court’s session the faculty, students and alums to mingled informally with the judges and their clerks to learn more about the court and possible clerkships. Professor Peter Strauss, Betts Professor of Law, made welcoming remarks and Judge Lourie spoke of his first visit to Columbia University as a high school student journalist and hearing then Columbia President Dwight Eisenhower speak.
Judges Prost and Lourie spoke of the influence Senior Circuit Judge Daniel M. Friedman had on the court. Friedman graduated from Columbia Law School in 1940. Prost and Lourie said it was an “honor” to be at the school Friedman is associated with. “He is a stellar example of government service,” Judge Prost said.
The court travels to spread awareness about itself and to interact with legal communities. “This provides the court and opportunity to demonstrate the breadth and the depth of the cases that most people wouldn’t be able to see. Not everyone comes to Washington, and this provides an important interface,” said Judge Gajarsa. “Columbia was excellent. The students are top notch.”
Columbia Law School, founded in 1858, stands at the forefront of legal education and of the law in a global society. Columbia Law School joins traditional strengths in international and comparative law, constitutional law, administrative law, business law and human rights law with pioneering work in the areas of intellectual property, digital technology, sexuality and gender, and criminal law.