A $5 million gift from the telecom entrepreneur to Columbia Law School will establish the Albert and Lois Cinelli Business Law Fund and provide support for scholarships, learning opportunities, and faculty research in the area of business law. 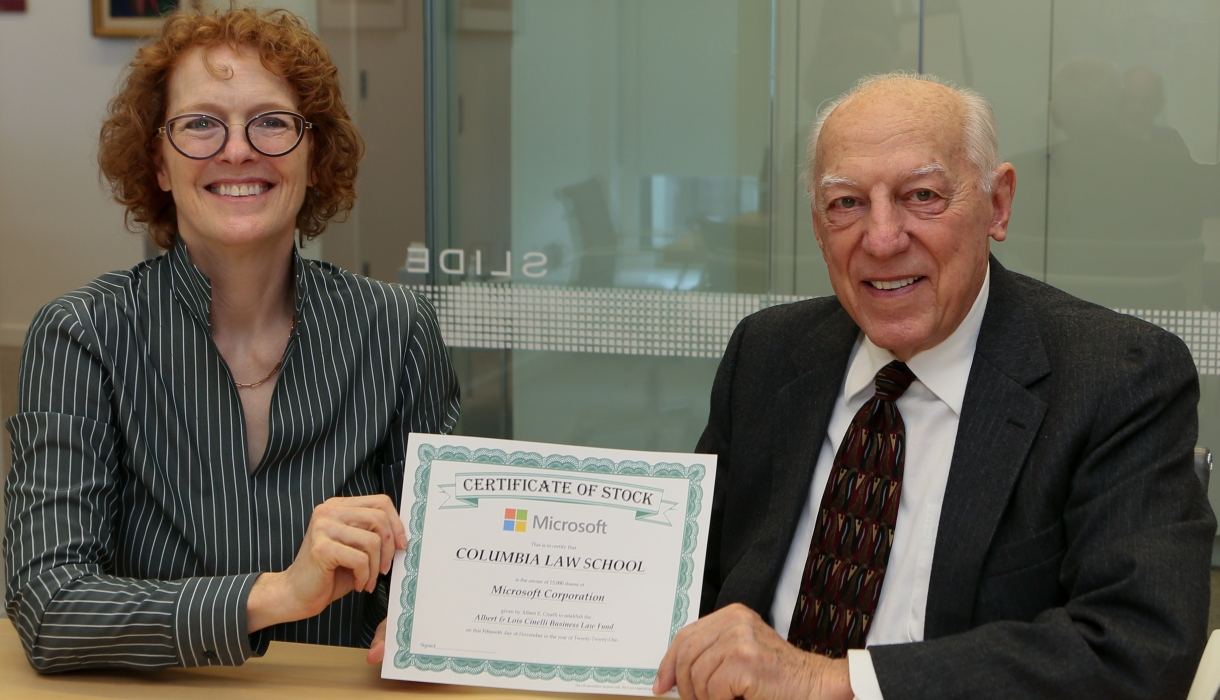 Albert E. “Al” Cinelli ’55 switched course in midlife, from general counsel to business owner, when he bought a struggling fiber optic company in Kentucky and nurtured it to profitability and growth. After 15 years, he sold it—and promptly started another. His success in business, he says, was made possible by the legal training he received at Columbia Law School, which gave him not only the skills but also the confidence to achieve his goals.

Now, Cinelli says, he wants law students to be able to follow a similar path. To make this possible, he has given $5 million to Columbia Law School to support the J.D./MBA program and to enhance the business law curriculum through student scholarships and faculty research.

As a Columbia Law graduate, “Whenever I applied for a job, I was presumptively qualified,” says Cinelli (pictured above with Gillian Lester, Dean and Lucy G. Moses Professor of Law.) “Columbia made my start into business so much easier. It gave me the springboard to a successful career. Columbia was so integral and so important in the success that I’ve had in life.”

Cinelli is currently chairman of MetroNet, the telecommunications company he founded in 2005 and that serves 13 states. “Law school taught me how to think independently and how to analyze problems.” That was the key to making his business grow, he says. “This [gift] is my way to say thank you.”

The new endowment, the Albert and Lois Cinelli Business Law Fund, will provide scholarships to Cinelli Scholars who are pursuing Columbia’s joint J.D./MBA degree or otherwise studying business law. “Al Cinelli’s extraordinary generosity will further buttress the strength of Columbia Law School’s business law program,” Dean Lester says. “The Albert and Lois Cinelli Business Law Fund is a wonderful expression of Al’s devotion to his alma mater and a vote of confidence in future students who want to follow his path and combine legal training with business acumen.”

Cinelli says the disciplines of business and law complement each other: At the companies he has led, “our lawyers are business persons first and lawyers second.” As a result, “The business people like them. They appreciate their ideas. Whereas a lot of corporations where the lawyers are strictly legal, the business people look at them as roadblocks. And from the point of view of the attorney, it’s more fulfilling for them because they’re playing a more dominant role in the growth of the corporation.”

“Al’s career exemplifies the idea that the finest business lawyers have a keen understanding of business. This is why Al was able to excel both as a valued counselor and then as an exceptionally successful entrepreneur—launching not one but two successful companies. I had the honor of serving on the board of the first, and I saw firsthand the way Al could reflect on various challenges we faced and turn them into opportunities. He was like a chess grandmaster, thinking several moves ahead. Through his generous support of our business law program, Al ensures that other Columbia graduates will follow the trail he has blazed.”

The gift also honors Cinelli’s first wife, Lois, whom he married while at Columbia Law and who died in 1976. Lois worked as a nurse to help finance his legal training while the couple lived in an apartment in Butler Hall. “They went through that experience together,” says their daughter Janet Cinelli. The couple had four children, and their son John is now CEO of MetroNet.

Cinelli, who lives in Olathe, Kansas, came to Columbia Law with dreams of being a New York trial lawyer and initially worked as a litigator for the Delaware, Lackawanna and Western Railroad. Stints as international general counsel for American Home Products (now Wyeth Pharmaceuticals) and vice president and general counsel for Marion Laboratories drew him closer to business deals, and in 1990, he bought Kentucky Data Link, a fiber optics telecommunications provider. He expanded the company’s services to cover 26 states and then sold it and started MetroNet. Along the way, he stopped referring to his workforce as “employees” and started calling them “associates.”

“They have a common interest with us,” he says of the MetroNet team. “We treat them with a level of respect. And we give stock options to as many people as possible so they feel like they’re partners in the business.”

In addition to his gift to Columbia Law, Cinelli’s philanthropic efforts include forming a charitable foundation for medical research into cancer, the disease that took Lois’s life and that of Cinelli’s second wife, Sharon. He also wants to support education research on college readiness for high school students, inspired by his own experience as a freshman at Lafayette College.

“I was taking calculus, and I didn’t understand it. I was flunking it,” he says. But one long study session with his roommate, a future engineer, made him an A student. “He turned the key,” Cinelli says. “I feel there are things that can be done that turn the key for these [struggling] students.”

His gift to Columbia Law came with confidence for the future of the business law program: “I’m putting it in good hands.”

The $5 million gift will enable the newly named Smith Family Human Rights Clinic to expand its work around the world.