Lee Gelernt, who is also a Columbia lecturer in law, is perhaps one of the most influential—and effective—immigrant rights’ lawyers in the country.

Lee Gelernt ’88 has seen and fought many injustices during his 26-year career at the American Civil Liberties Union. But in February, Gelernt, the deputy director of the ACLU Immigrants’ Rights Project, was stunned by the story a Congolese woman told him: After she had legally presented herself at the U.S. border, fleeing violence in her home country, she said immigration agents handcuffed her to a chair and took away her wailing 6-year-old daughter without explanation.

At the time of her meeting with Gelernt, the woman was in a San Diego–area detention center and hadn’t seen her child in nearly four months.

Gelernt promptly filed a lawsuit, which would become the class-action case Ms. L v. ICE. That suit would shine a light on Trump administration’s zero-tolerance immigration policy, eventually revealing that some 2,600 children had been forcibly separated from their asylum-seeking families at the U.S border.

By March, Ms. L had been released and reunited with her child. In late June, U.S. District Court Judge Dana Sabraw declared the government practice unconstitutional and ordered the government to reunite the thousands of families and prohibited any deportation of parents without their children unless the families knowingly agreed.

“We just had to win this one,” says Gelernt, who argued that the administration’s actions violated the Constitution’s due process clause. “The family-separation practice is inhumane and unprecedented. It cannot be that the government can take children, babies, and toddlers away from their parents.”

Gelernt, who is also a lecturer in law at Columbia Law School, is perhaps one of the most influential—and effective—immigrant rights’ lawyers in the country. Since joining the ACLU in 1992, Gelernt has argued dozens of civil rights cases at all levels of the federal court system, including the U.S. Supreme Court. He served as one of only a few human-rights observers at Guantanamo Bay for the first military trial conducted by the United States since World War II. On behalf of the ACLU, he argued the first legal challenge to President Donald Trump’s executive order temporarily banning travel from several Muslim-majority nations. (After many court battles, the administration’s revised executive order was upheld by the U.S. Supreme Court.)

Working out of an office in Lower Manhattan, Gelernt has an expansive view of New York harbor, once a welcoming site for hundreds of thousands of immigrants. Seated at a desk piled with legal briefs and soda cans, Gelernt seems like someone who might be more at home in the law library than in the limelight. His virtually nonstop summer workload, however, has included frequent radio and television interviews and appearances at events, including one with actor Tom Hanks, and a video made with Maggie Gyllenhaal and other celebrities to call public attention to government immigration policies and their impact on families. 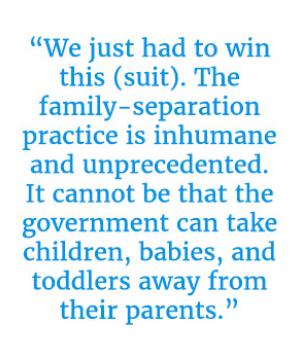 “Whether I like it or not, media is part of my job as an advocate,” says Gelernt. He considers it important that media coverage helped generate public outcry and letters of condemnation from a range of people—including Laura Bush, the Rev. Billy Graham, and the Pope—on all sides of the political divide. “The advocacy and the lawsuit combined to create public outrage, and for the first time, we saw the administration step back,” he said, noting the federal government partially rolled back the policies that involve family separations. “This made the country look harder at what is being done in their name on immigration.” (The class-action is still ongoing as some 500 children have yet to be reunited with their families, and some parents already are believed to have been deported.)

Spend a few minutes with Gelernt, and it becomes clear that his work is a calling. As soft-spoken as he is fierce-minded, it’s no surprise that Gelernt comes from a politically engaged family. His sister, Michelle, is a high-profile federal public defender; his father was a pioneering surgeon; and his mother helped to start Manhattan Country Day, a progressive school founded to champion “excellence and justice, compassion and peace, and the rights of all people to racial, economic, environmental and educational equity,” according to its website. (Gelernt was the among the first students there. “This stuff is pretty deep in my blood,” he says, and both of his sons, 13 and 17 years old, attended.)

As a Columbia Law student in the 1980s, Gelernt says, “Immigration was the farthest thing from my mind. I thought I might be a public defender.” He was a Notes and Comments Editor of the Columbia Law Review, and he pursued an interest in what he calls more traditional civil rights issues. One summer, for instance, he worked for two Atlanta lawyers handling death penalty cases. After graduating, he clerked for a judge on the First Circuit U.S. Court of Appeals and was a fellow for a San Francisco civil rights firm for one year. Then he joined the ACLU as a lawyer in the immigrant rights’ unit, seeing that he’d have an opportunity to represent some of society’s most vulnerable people, which is what drew him to civil rights work in the first place.

An active alumnus, Gelernt frequently speaks on campus (on September 21, he will be participating on a panel about impact litigation with Supreme Court Justice Ruth Bader Ginsburg '59, Professor Gillian Metzger '96, Professor Olatunde Johnson, and Center for Reproductive Rights President Nancy Northup '88. Dean Lester will kick off the panel with a conversation with Justice Ginsburg.) Gelernt confers often with Columbia professors, has enlisted faculty to write amicus briefs, solicited help from students on a range of cases — including a legal challenge to a Texas anti-sanctuary law — and regularly advises students interested in public interest law.

This fall Gelernt is teaching a seminar on the rights of noncitizens post-9/11; the class is designed to give students a taste of what it is like to be an advocate in the field and, Gelernt says, “will attempt to show how difficult the issues are.”

One thing Gelernt says he always tells students is to take their responsibility seriously. “Do not be cavalier about what it means to be a lawyer for people who are vulnerable,” he says, quietly. “Your clients really count on you. When you sit in your office at a place like the ACLU, working on difficult doctrinal issues and briefs, always remind yourself of the people who are being affected.”