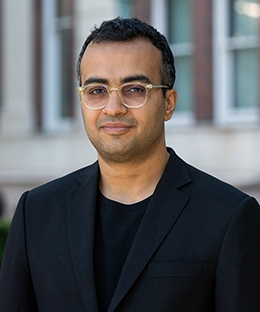 Madhav Khosla is an Associate Professor of Law at Columbia University. He is interested in the nature and form of constitutions, especially from a comparative and theoretical perspective. Much of his research and writing in comparative constitutional law has focused on South Asia and India. Khosla studied political theory at Harvard University, where his dissertation was awarded the Edward M. Chase Prize for “the best dissertation on a subject relating to the promotion of world peace”, and law at Yale Law School and the National Law School of India University, Bangalore. Before joining Columbia Law School, he was a Junior Fellow at the Harvard Society of Fellows.

Khosla's books include India’s Founding Moment: The Constitution of a Most Surprising Democracy (Harvard University Press 2020), which was an Economist Best Book of 2020 and co-winner of the Order of the Coif Book Award 2021, The Oxford Handbook of the Indian Constitution (ed. with Sujit Choudhry and Pratap Bhanu Mehta, Oxford University Press 2016), and Unstable Constitutionalism: Law and Politics in South Asia (ed. with Mark Tushnet, Cambridge University Press 2015). In addition, Khosla’s writings have been published in journals such as the American Journal of Comparative Law, Harvard Law Review, and the International Journal of Constitutional Law, as well as popular forums like the Atlantic, Foreign Affairs, New York Times, and Time. Khosla’s work has been cited by courts in India and Pakistan.

“Democracy and Decolonization: How India was Made,” 18 International Journal of Constitutional Law 1031 (2020)

India’s Founding Moment: The Constitution of a Most Surprising Democracy (Harvard University Press 2020)

Letters for a Nation: From Jawaharlal Nehru to His Chief Ministers (ed., Penguin Allen Lane 2014)

“Proportionality: An assault on human rights? A reply”, 8 International Journal of Constitutional Law 298 (2010)

The Order of the Coif Book Award (for India's Founding Moment)

Edward M. Chase Prize, Harvard University (awarded for “the best dissertation on a subject relating to the promotion of world peace”)

Cept University Convocation: Citizenship Ultimately About How We Relate to Each Other, Says Madhav Khosla

| The Indian Express
In The Media

| The Times of India
In The Media

Centre vs. States: Exploring the Historical Roots of India’s Distinctive Form of Federalism