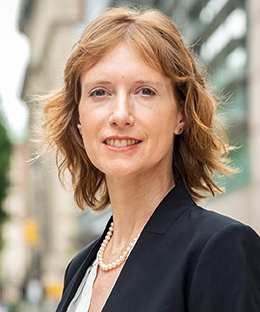 Kate Andrias teaches and writes in the fields of constitutional law, labor law, and administrative law. Her scholarship probes the failures of U.S. law to protect workers’ rights, examines the efforts of historical and contemporary worker movements to transform legal structures, and analyzes how labor law and constitutional governance might be reformed to enable greater political and economic democracy. Drawing from constitutional law, administrative law, and legal history perspectives, she also has explored the relationship between law and the perpetuation of economic inequality. She frequently provides advice on policy initiatives to legislators and workers’ rights organizations and works on related litigation.

Prior to law school, Andrias worked for several years as an organizer with the Service Employees International Union. After receiving a J.D. from Yale Law School, she clerked for Judge Stephen Reinhardt of the U.S. Court of Appeals for the 9th Circuit and for Justice Ruth Bader Ginsburg ’59 on the U.S. Supreme Court. Andrias practiced political law at Perkins Coie and served as associate counsel and special assistant to President Barack Obama and as chief of staff in the White House Counsel’s Office.

She joined the faculty of Michigan Law School in 2013 and was the recipient of its L. Hart Wright Award for Excellence in Teaching in 2016. She joined the faculty of Columbia Law School in 2021 and also has served as an academic fellow at Columbia Law School and taught American Constitutional Law as a visiting professor at L'Institut d'Études Politiques (Sciences Po) in Paris. Andrias served as a commissioner and the rapporteur for the Presidential Commission on the Supreme Court and sits on the Board of Academic Advisors of the American Constitution Society.

Read All Stories More In The Media
Faculty Video

At a Lawyers, Community, and Impact event, Columbia Law Professors Kate Andrias, Bert Huang, and Olatunde C. Johnson who served on the commission explain why the SCOTUS report is a must-read.

California Could Transform How Fast Food Workers Are Treated

| Vox
In The Media

Jackson on Brink of History and Stunning Union Win