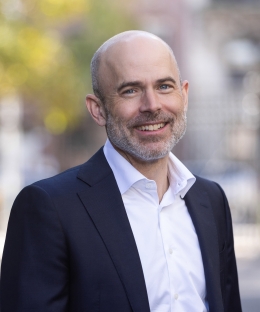 Ed Morrison is an expert in corporate finance and restructuring, household finance and consumer bankruptcy, and contract law. He is co-editor of the Journal of Legal Studies.

He received the 2018 Willis L.M. Reese Prize for Excellence in Teaching, awarded by the graduating class of the Law School.

Morrison’s research has been published in the American Economic Review, Journal of Law & Economics, and other leading peer-reviewed publications. His work has been cited by the bankruptcy bench and bar and received support from the National Science Foundation and Pew Charitable Trusts. Morrison and his co-author (Douglas Baird) received the 2012 John Wesley Steen Law Review Writing Prize from the American Bankruptcy Institute (ABI) for an article on the Dodd-Frank Act published in the ABI Law Review.

Morrison was the Paul H. and Theo Leffmann Professor of Commercial Law at the University of Chicago Law School from 2013 to 2014. He first began teaching at Columbia Law School in 2003 and from 2009 to 2012 was the Harvey R. Miller Professor of Law and Economics. Morrison clerked for Justice Antonin Scalia of the U.S. Supreme Court and for Judge Richard A. Posner of the 7th U.S. Circuit Court of Appeals.

“It’s important to be open to learning from those around you, including your students.”

Beyond “Unprecedented”: A New Chapter for Bankruptcy?

In episode three of Columbia Law’s new limited podcast series, hosted by Professor Eric Talley, Professor Ed Morrison and research fellow Kate Waldock talk about whether bankruptcy can be a lifeline for companies to survive the economic crisis, rather than a death knell—and if there is a coming surge of bankruptcy filings from businesses and individuals alike.

| Bloomberg
In The Media

| CFO Dive
In The Media