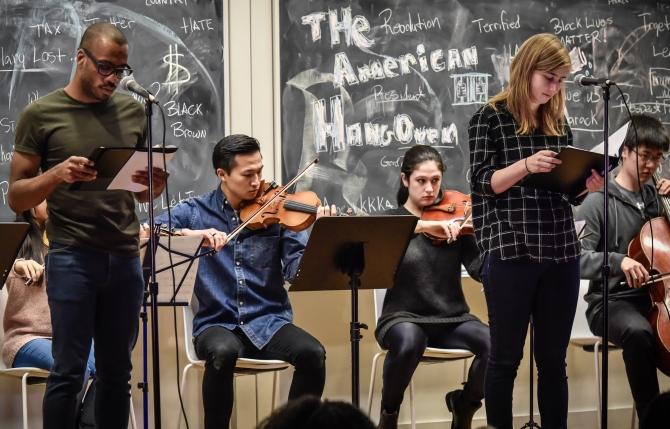 Broadway stars from The Color Purple and Hamilton came uptown again Sunday Dec. 4 for their third set of collaborative performances and panel discussions with Columbia Law School faculty and students.

The evening—entitled "The American Hangover"—was the latest installment in an ongoing project called "The Invitation," a pioneering effort to blend art and activism, with law and policy. The Broadway Advocacy Coalition (BAC) organized the event in tandem with the Law School. Professors Susan Sturm and Kendall Thomas—extraordinary musicians in their own right—have played a key role in cultivating this connection with BAC with input from students, faculty, and staff, and enthusiastic encouragement from Dean Gillian Lester.

Under lecture-room lighting, Brandon Victor Dixon (CC ’03)—now famous beyond Broadway for appealing to audience-member Vice President-elect Mike Pence for unity last month at a performance of Hamilton, where he’s playing Aaron Burr—crooned a knockout rendition of “Stand By Me.”

He was preceded on the stage of Columbia University’s Altschul Auditorium by a troupe of dancers—from Alvin Ailey, Philadanco and the Broadway shows Motown the Musical, Spiderman, and The Color Purple—who performed “1960 What & Africana,” a world-premiere “reaction to the election and the fallout/aftermath that followed,” in the words of Amber Iman, co-founder of BAC. The arresting choreography was by LaTrisa Harper, with quotes from Martin Luther King, Nelson Mandela and Maya Angelou set to music.

The free monthly event was open to the public and livestreamed. It featured the most fully integrated collaborations to date between CLS and BAC, kicked off last summer with an event, Broadway for Black Lives Matter.

“We can’t afford to stay in our separate lanes anymore,” said Ben Wexler, a composer who collaborated with a group of second-year students to create a music and spoken word piece called “Before and Now.” Que Mykte' Newbill ’18, spoken word artist and slam poet, transformed into poetry his classmates’ reflections on how the election has affected their professional goals. Wexler, Words on White founder Zhailon Levingston, and musical director Solomon Hoffman collaboratively set the material to music and performed on stage with Beulah Agbabiaka ’18, Hanna St. Marie ’18, and Color Purple star Akron Watson. They were backed by six musicians from the Songwriter’s Orchestra.

“I thought maybe I’d be sneaking off to Harlem to perform during law school, but I didn’t think I’d be performing at law school,” said Newbill from the green room before the performance.

“The first time I heard Zhailon singing that chorus I started to cry,” said St. Marie after the show. Newbill’s reworking of her thoughts, combined with the music “put it in a way that goes directly to your heart” and “opened up a new way of thinking about how the arts can amplify these skills we’re getting, and in a way that could have a lot more impact in the end.”

In perhaps the most provocative performance of the evening, actor Alex Kramer, clutching a Pittsburg Steelers hat, portrayed a Trump supporter from rural Pennsylvania. He nervously answered questions from a hushed, hoodwinked audience. When Alexandra Carter ’03, clinical professor of law and director of the Law School’s Medication Clinic, revealed him to be an actor, there were audible sighs of relief, including from Kramer, a Brooklyn-based activist. He described the impossibility of impersonating someone simply by examining their ideology.  He needed to immerse himself in his character’s stories and life circumstances—an example of “radical empathy,” a phrase used by Sturm and others, and a lesson for the audience.

“We have to climb out of our ice cube trays,” said Tony Award-winning composer of Fun Home Jeanine Tesori at Sunday’s event. This may explain why she can be spotted this semester taking Sturm’s civil procedure course. That mandate is working in the reverse, too. Sharing the stage with Tesori, Thomas said, “For many years I persuaded myself that the part of me that sings jazz and German lieder, with Susan Sturm at the piano, had to be left to the side to teach law.” He said the BAC/CLS collaboration had committed him to bringing his “whole self” now to the work he does.

Panelist Richard Gray, director of organizing and engagement for the Annenberg Institute of School Reform, and a Law School lecturer who co-teaches a seminar with Sturm on Vision, Action and Social Change, spoke about the degrading of language in political rhetoric. Referencing Harry Frankfurt’s book, On Bullshit, Gray continued, “It’s a time for art. Art is the antidote because it’s equally passionate, but driven by honesty.”

In a “toolkit” panel facilitated by Sturm, Jacqueline Lewis, senior minister at Middle Collegiate Church, exemplified her “hero” Howard Gardner’s adage that “leaders tell stories that change the story” by recounting how “an old white woman,” a complete stranger who approached her in a hospital phone booth, helped her recover from a devastating car accident. And Patricia Okonta ’18, introduced by Sturm as a community organizer who “was my student and is now my role model,” movingly described an event she’s organized in her hometown of Liberty, Missouri—where her immigrant parents “received hate mail from the KKK” and she was “told to go back to Africa”—for which she has brought together police officers, faith leaders, high school students and other members of the community.

Writer and performer Condola Rashad brought down the house with her musings on “human connectivity” and the effect of social media on our communities and ourselves. “We are not engaging in conversation with social media,” she said. Arguing that conversation can only occur face to face, Rashad buttressed the collective goal of  bringing together artists and activists—“artivists”—monthly.

Ben Vereen: “Boots on the ground.”

The legendary Broadway star Ben Vereen—wearing a shirt emblazoned with “Good Fortune Favors the Brave” and a “Spiritual Enforcer” hat—closed the evening exhorting the crowd that what we need “is a Martin Luther King posture… a Gandhi consciousness”—and “boots on the ground.”

A video of the entire event is available here (scroll down to the end of the page).

The next “Invitation” will be in early 2017, according to BAC co-founder Britton Smith. He added: “Columbia Law School is one of the best institutions in this country. For us to have access to its resources… we feel so grateful.”

Photographed by Images for Innovation