With regimes in the region toppling and teetering, panel discussions addressed the “Jasmine Revolution,” as well as Iran and the Israel-Palestine situation.

“People ask me, did I expect this [wave of reform],” said Alon Ben-Mier, an Iraqi-born professor at New York University and the New School who was part of the conference’s first panel. “Well, I didn’t expect it this month, or next month. But 55 percent to 60 percent of the Arab population is youths under 20, and it was only a matter of time before they rebelled against the old regimes.”

Ben-Mier and other panelists at the Apr. 12 conference in Jerome Greene Hall stressed that the uprisings—spanning from Tunisia, Libya, Egypt and Bahrain—were indigenous movements arising from secular, rather than religious impulses.

Hoda Osman, an Egyptian freelance journalist in New York, shared her feelings of joy at returning to Cairo and voting for the first time. Still, she cautioned, democracy will not come overnight. “We have freedom, but not yet democracy and the institutions that come with it, which will take time.”

Maya Steinitz, (below) an Associate-in-Law who chaired the panel, asked what the revolutions would augur for women’s

rights. Abdulkhaleq Ali Saeed Bin-Dhaaer Al-Yafei, who represents the United Arab Emirates at the United Nations, said the Emirates and a few other Arab nations have already made progress on that front. But Ben-Mier said it would be wrong to paint a rosy picture. “Abu Dhabi may be relatively progressive, but it represents just one percent of the population,” he said. “The fact is that women are treated as second-class citizens or worse throughout much of the Arab world.”

Meanwhile, just because Arab regimes are falling, no one should expect a sudden rapprochement with Israel, cautioned Fazlı Çorman, a Turkish representative at the U.N.. “The youth is more anti-Israel and pro-Palestinian than the regimes that have collapsed,” he said. Indeed, among the factors that led to the protests in Egypt were WikiLeaks revelations about cozy relations between President Hosni Mubarak’s intelligence service and Israel’s. 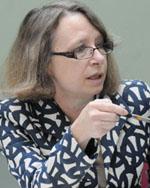 Organization, moderated a panel that dealt with issues surrounding the Israel-Palestine imbroglio.

Zionist firebrand Brooke Goldstein, a human rights attorney, argued that all international legal forums should be bypassed altogether because they are irredeemably anti-Israel, and that Israel’s judicial system and army are capable of policing the nation’s actions.

Yaniv Sagee, an Israeli education activist and a member of Kibbutz Ein Hashofet, said there needs to more focus on educational efforts in Israel to help bridge differences. “What we have in Israel right now is a segregated schools system,” he said. “There’s very little interaction between Jewish Israelis and Arab Israelis.”

One of the conference organizers, David White ’12, said he was “glad the conference could help build awareness and promote discussion during this critical time in the region.”

The Friedmann Conference is held annually by the Columbia Society of International Law and the Columbia Journal of Transnational Law to honor the late Columbia Law School Professor Wolfgang Friedmann. A jurist, teacher, scholar, and humanist, Friedmann was born in Berlin in 1907 and as a Jew, fled Germany when the Nazis came to power.  In World War I he served with the political intelligence department of the British Foreign Office and with the Allied Military Government from 1944 to 1947. He founded the Columbia Journal of Transnational Law in 1961, the oldest student-run journal of international law. It is widely considered by the international legal community to be one of the most important publications in the field.

This year’s Friedmann honoree was U.S. Special Envoy for Middle East Peace and former Senate Majority Leader, George Mitchell, (below, left) who, under President Clinton, helped shepherd the Northern Ireland peace process. President Obama appointed Mitchell to the U.S. Special Envoy for Middle East Peace. The award was presented to Mitchell by Ana Christa Boksay ’11, (below, right) the current Editor-in-Chief of the Columbia Journal of Transnational Law, for making “outstanding contributions to the field of international law,” and as a way to memorialize Friedmann’s legacy. 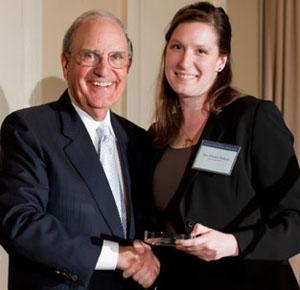