Anne Cohen ’85 is one of the chief lawyers managing an internal investigation for a major company headquartered in Munich.

Over the last two years, attorney Anne Cohen hasn’t had the luxury of working for more than a few days at a time in her Manhattan office—a sprawling corner space on the 47th floor of a high-rise with views of the Chrysler Building and Rockefeller Center. Cohen, a partner in Debevoise & Plimpton’s litigation department, has spent much of the past 20 months in Germany (with brief stops in Beijing and Shanghai), where she is one of the chief lawyers managing an internal investigation for a major company headquartered in Munich.

In her 22 years at Debevoise, Cohen has also worked stints in Istanbul and London, as well as Miami and Mississippi, using her expertise in “big mess” litigation to counsel clients like Coca-Cola and Occidental on issues ranging from products liability to the Alien Tort Statute to the Foreign Corrupt Practices Act. Hers is a life that frequently transcends time zones. It often calls for high-pressure negotiations with multinational conglomerates and strategy sessions about how to analyze thousands of cases.

But Cohen is quick to point out that one of the elements of her career that she enjoys most is something most would find absolutely mundane: visiting the manufacturing plants of the companies she represents.

“My favorite is the Remington factory in upstate New York,” says Cohen, who served as outside counsel to the country’s oldest long gunmaker for 12 years. “I used to love to see the robotics making rifle barrels, picking up the pieces of steel and putting them in a forge. A few yards away, a guy wearing a pair of heat-resistant gloves would be using a 1920s forge to make a specialized barrel. I loved the industrial history, the fact that I knew the products, and I knew the people.”

Her office is decorated with mementos that hint at her adventurous career: a crash test dummy doll (a gift from her mother), a photograph of Cohen at the periscope of a nuclear submarine, and a black-and-white portrait, taken by her father, of Cohen at age 2, wearing a cowboy hat and waving a toy six-shooter. “I didn’t want to be Dale Evans,” she explains. “I wanted to be Roy Rogers.”

Cohen, who is petite and stylish, and has a whip-smart sense of humor, started out as a journalist. While reporting for a weekly paper in her native Cincinnati, she helped cover Larry Flynt’s first obscenity trial for The New York Times. Her work landed her a job with the Cincinnati Post. In the midst of hiring freezes, she won a Ford Foundation fellowship for reporters to Yale Law School, then moved on to Columbia Law School. “Columbia was very good for me,” she says. “I had to think about the next steps [in making an argument] with more rigor than I ever had to before.” Still, she credits her reporter days as well with helping craft a solid case.

“Both litigation and daily journalism are about figuring out how something happened and how to present it,” she says. “I’m a facts girl. I love figuring out who the people are and why events occurred the way they did, and that’s been the way of my practice.” 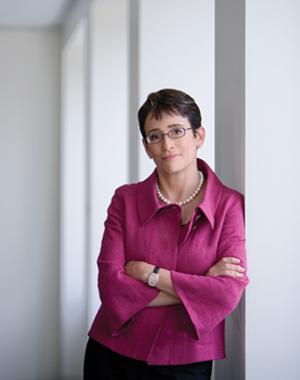 Her travels have given Cohen an opportunity to explore her interest in photography. She often takes shots from moving cars and trains with her Leica M8. Her spare time is also devoted to serving on the board of New York’s Citymeals-on-Wheels. A longtime member of the Law School’s Board of Visitors, she recently became a member of the Dean’s Council, giving her a chance to share insights gained from her broad career.

“I’d hoped when I left journalism that the range of things I could do under the umbrella of being a lawyer would be enormous,” Cohen says, “but I didn’t realize I could have that variety without changing jobs. What’s so wonderful about law is that you can be practicing at a high level, and 15, 18 years out, you can still work on something that’s entirely new.”

Jennifer Itzenson is a freelance writer in New York whose work has appeared in Condé Nast Portfolio and the New York Observer.

View this article as it appeared in the Columbia Law magazine.