Throughout the show’s run, the Law School will host a series of public events focused on capital punishment.

After touring U.S. and European cities for two years, “Windows on Death Row: Art from Inside and Outside the Prison Walls,” made its New York premiere at Columbia Law School on Sept. 19. The exhibit—which is prominently displayed on the lobby walls of the Law School’s main building, Jerome Greene Hall—will run through mid-November.

Featuring more than 60 works by people on death row, as well as some of America’s top political cartoonists, “Windows on Death Row” is designed to stimulate conversation on an issue that touches politics, race, morality, and the question of equality under the law. During its run, the Law School will present a series of public events that explore the power of art, freedom of expression, and the future of capital punishment. 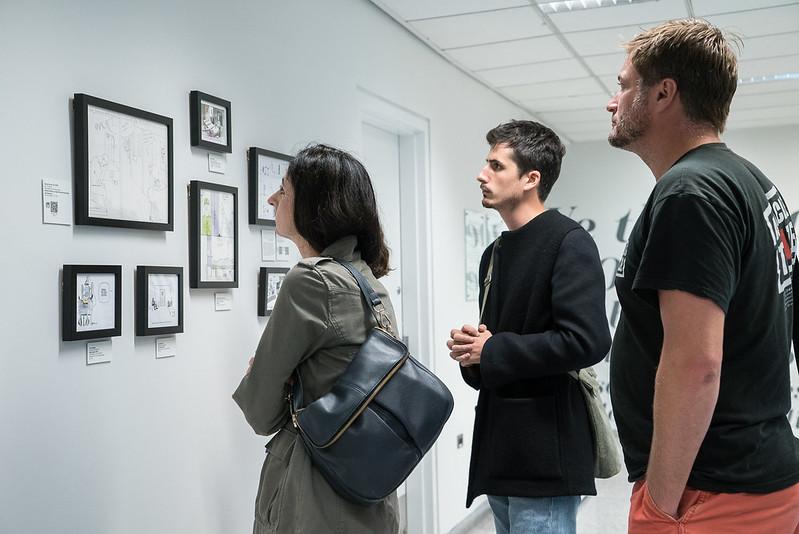 Brandon L. Garrett ’01, the Justice Thurgood Marshall Distinguished Professor of Law at the University of Virginia School of Law, will discuss his new book, End of Its Rope: How Killing the Death Penalty Can Revive Criminal Justice, followed by comments by Jelani Cobb, Columbia professor and a staff writer at The New Yorker. Lunch will be served.

Leading capital defense lawyers will discuss strategic litigation and policy. The conversation will be moderated by Columbia Law School Professor Bernard Harcourt. Panelists will include Barry Scheck, co-director of the Innocence Project; Christina Swarns, attorney-in-charge at the Office of the Appellate Defender; Maya Foa, director of Reprieve; Professor James Liebman, director of the Center for Public Research and Leadership; George Kendall, of counsel at Squire Patton Boggs; and Julia Tarver-Mason Wood, partner at Paul, Weiss, Rifkin, Wharton & Garrison. A reception will follow.

Artists whose work is exhibited in “Windows on Death Row” will discuss their experiences and the need to defend the freedom of the press. David Schulz, a Floyd Abrams Clinical Lecturer in Law at Yale Law School and a leading First Amendment lawyer, will moderate. A reception will follow.

This winner of the 2003 Drama Desk and Outer Critics Circle Awards for best play tells the interwoven true stories of six wrongfully convicted survivors of death row, in their own words. Members of the Columbia University community, under professional direction, will perform.

You can view photos from the “Windows on Death Row“ opening event in the gallery above or at the Law School’s Flickr account.

You can view video of the opening event above or on the Law School’s Facebook page.