This exhibit of paintings and illustrations by individuals on death row opens Sept. 19, accompanied by a discussion of capital punishment and criminal justice.

After touring U.S. and European cities for two years, “Windows on Death Row: Art from Inside and Outside the Prison Walls,” makes its New York premiere at Columbia Law School in New York City. Its creators explain that the art exhibit, featuring over 60 works by people on death row and some of America’s top political cartoonists, is designed to stimulate conversation on an issue that touches politics, race, morality, and the question of equality under the law. This extraordinary collaborative project captures our collective response to the crimes of death row inmates, as well as the reactions of the inmates themselves to their crimes and their punishment. The exhibit, which will run until mid-November, is on view on the first floor of Columbia Law School, 435 W. 116th Street.

At the September 19th opening event, the project’s founders—editorial cartoonist Patrick Chappatte and filmmaker Anne-Frédérique Widmann—will take you behind the scenes of the exhibition and into death row through a 40-minute on-stage multimedia presentation. Fifty-six-year-old painter Ndume Olatushani, who spent 20 years on death row for a crime he did not commit, will participate in a roundtable discussion with his lawyer, David Herrington, and Columbia Law School faculty members George Kendall and Carine Williams. Bill Keller, editor-in-chief of The Marshall Project and former executive editor of The New York Times, will moderate. Afterwards, Chappatte and Widmann will join the group for a Q&A. The program is free and open to the public.

The exhibit expresses a critical dimension of the debate over the future of capital punishment in the U.S. Death sentences and executions have declined sharply in the U.S. over the past 15 years. Yet more than 2,800 people remain on death row in states and federal prisons across the country. They are incarcerated in harsh conditions for long periods that in some cases span decades. The exhibit expresses the complex and intense emotions arising from their time on death row, and their struggle to maintain their dignity and the dignity of others on death row.

“We are honored to bring these powerful images from death row inmates and notable journalists to Columbia Law School. These works focus our attention on urgent issues on punishment and justice that drive our national debate on execution,” said Jeffrey Fagan, Isidor and Seville Sulzbacher Professor of Law at Columbia Law School and one of the coordinators of the exhibit and related programming at Columbia.

The collection offers a sharp and witty point of view on the ongoing debate about capital punishment in America. Chappatte and Widman say, “We hope to contribute to a necessary debate that is not only taking place inside the United States, but also between America and the rest of the Western democracies.”

Ellen Chapnick, dean emerita of Social Justice Initiatives and the co-coordinator of the exhibit and events said, “Columbia is the only Law School to host this exhibit. Ideally, it will inspire our community to join the many faculty members, students, and graduates who already do significant work on capital defense, prison conditions, and other criminal justice issues.”

Throughout the show’s run, Columbia Law School will present a series of public events that explore the power of art, freedom of expression, and the future of capital punishment. Another focus will be the repercussions a death sentence has not only on defendants, but also on their communities.

Brandon L. Garrett ’01, the Justice Thurgood Marshall Distinguished Professor of Law at the University of Virginia School of Law, talks about his new book, End of Its Rope: How Killing the Death Penalty Can Revive Criminal Justice, followed by comments by Jelani Cobb, Columbia Professor and a staff writer at The New Yorker. Lunch will be served.

Cartoonists’ expressions of political ideas are threatened by violence, the state, and social media campaigns. Artists whose work is exhibited in “Windows on Death Row” will discuss their experiences and the need to defend the freedom of the press. David Schulz, a Floyd Abrams Clinical Lecturer in Law at Yale Law School and a leading First Amendment lawyer, will moderate. Reception to follow.

This winner of the 2003 Drama Desk and Outer Critics Circle Awards for best play tells the interwoven true stories of six wrongfully convicted survivors of death row, in their own words. Members of the Columbia University community, under professional direction, will perform. 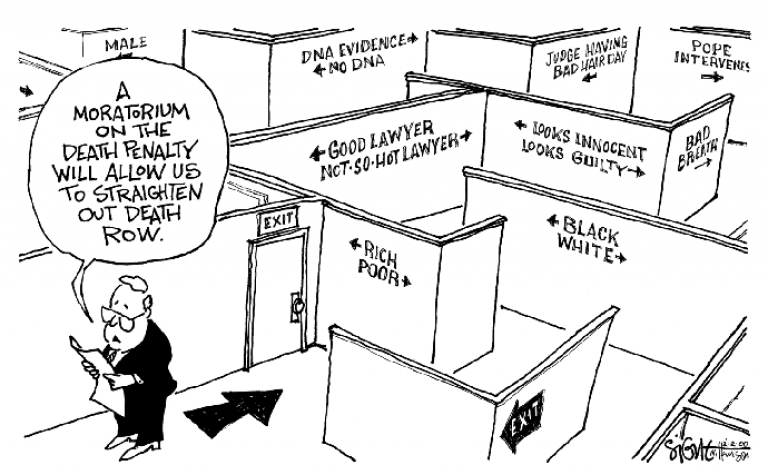 An editorial cartoonist for The New York Times and a pioneer of comics journalism in print, web, and animation, Patrick Chappatte was named a Young Global Leader by the World Economic Forum in 2006. In 2011 and 2015, he received the Thomas Nast Award from the New York Overseas Press Club of America. In 2012, he was named a doctor of international relations, honoris causa, by the Geneva School of Diplomacy. He was a research fellow at the University of Southern California’s Annenberg School for Communication and Journalism and sat on the school’s Innovation Lab advisory board. Chappatte has delivered talks at the World Economic Forum in Davos, most recently in January 2017, as well as TED conferences. The New York Times has published seven collections of his cartoons.

Promoting editorial cartooning as a tool for dialogue, and art as a way to facilitate conversations on human rights, Chappatte has mounted projects with editorial cartoonists in conflict-ridden countries over the last 10 years. Such initiatives, featuring workshops, exhibitions, and debates, were organized in Serbia, Ivory Coast, Lebanon, Kenya, and Guatemala with the support of the Swiss Federal Department of Foreign Affairs. He also co-founded the Geneva-based foundation Cartooning for Peace, with Kofi Annan as honorary president, establishing an international prize to recognize cartoonists for their courage.

Anne-Frédérique Widmann is a Swiss investigative reporter, producer, and documentary filmmaker for the Swiss TV Broadcasting. In New York, she was the foreign correspondent for the Swiss daily Le Nouveau Quotidien and the news magazine L’Hebdo (1995–1998). Widmann joined Swiss TV in 2003, where she became the co-producer, editor-in-chief, and anchor of the current affairs documentary program Temps Present (the Swiss equivalent of 60 Minutes). In 2010, she set up the investigative team of the Swiss TV and Radio Broadcasting Corp. (RTS), which she led until 2014.

Widmann’s documentary, An Eye for an Eye: The Vengeance of the Gaddafi Clan (2014), was nominated for the Europa Prize and was a finalist for the Italia Prize. In 2010, she was awarded the Nicolas Bouvier Prize for best documentary for her work in Colombia.

An independent curator and arts management consultant, Hromadka’s curatorial work includes directing two commercial galleries, serving as arts administrator for the Y&S Nazarian Family Foundation, and serving as the curator for the Hebrew Union College-Jewish Institute of Religion. She also runs her own nonprofit, NuART Projects, which raises funds to support local artists.

Hromadka’s curatorial practice is rooted in a love for storytelling—bringing together communities to explore their narratives in the public sphere through interactive design. Examples of her approach can be seen in several of her recent projects. In 2014, she co-curated an exhibition with Hirokazu Kosaka, artistic director at the Japanese American Culture & Community Center, as part of Voices of LA, a citywide festival bringing together diverse artists to celebrate Los Angeles’s rich, multicultural fabric.

Hromadka was also the co-curator of 7,567mi→ at the 2015 Jerusalem Biennale. To implement its goal to create a dialogue that extended beyond the biennale, Hromadka and her co-curator Georgia Freedman-Harvey, partnered with three regional institutions to curate tandem exhibitions in Southern California.