Which Red Wine Goes Best with a Redweld?

By Sonia von Gutfeld
November 21, 2007 (NEW YORK) -- Scores of students filed into a lecture hall on the first floor at Columbia Law School, took their seats, and, armed with handouts and pens, waited for an evening lecture to begin. But the subject wasn’t torts or contracts, and the two speakers at the lectern were not professors; they were French winemakers, there to teach law students about Bordeaux.
How might one describe a 1999 Bordeaux?

Bruno Eynard, the director and winemaker of Château Lagrange in the St. Julien appellation on the left bank of the Gironde in France, put his face to the glass and breathed in deeply.

“Not a very open nose,” he said, “but some fragrances of prune, wood, cedar, and,” – he inhaled again – “light notes of chocolate.”

“I don’t know about chocolate,” mumbled one student, who gave it another smell before bringing the glass to his lips.

For the past 12 years, Columbia Law School students have come together to sip, study and savor wines of the world. The popular club, called DeVinimus, is open to all and draws more novices than connoisseurs. Unlike many extracurricular activities that seem like an extension of class – Law Review, American Constitution Society, and Society for Law, Health and Bioethics, to name a few – DeVinimus is devoted to the knowledge of leisure. 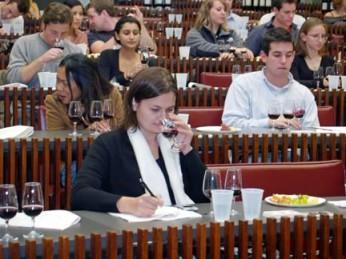 While the club may be more social than academic, it’s not without professional value.

“You realize by being exposed to lawyers that this is a grown-up world where people are taken out to lunches, and wine is certainly a better topic to be able to talk about than the weather,” said Kathrin Schwesinger ’09, a board member of DeVinimus and budding wine enthusiast. “There’s only so much you can say about a mixed drink.”

“Knowledge of wine and the shared experience of food and wine can be an integral aspect of client development and an enjoyable way to deepen personal relationships,” said Bob Cunningham, a partner at Gibson Dunn & Crutcher and member of the Columbia Law School Class of 1972 who gives the “Wines 101” lecture at the start of each school year and serves as the club’s unofficial advisor.

Cunningham, a North Carolina native who attended Davidson College as an undergraduate, first fell in love with wine during his junior year abroad in France, where his host family “drank wine instead of iced tea.” After law school, he practiced in Paris for two years and came to appreciate what older wines are about.

“It’s the tertiary aromas that have little to do with fruit and have a lot to do with all the other olfactory experiences and memories from one’s entire life – from leather to earth to minerality to the smell of a fresh rain on slate or concrete in the summer or spring,” Cunningham said. “Things of that nature can really be found only in wine.”

Cunningham imparts this appreciation to his students through an interactive class. Instead of just lecturing, he asks questions to encourage students to put words to their experiences of the different wines they sample  – pinot noir, cabernet sauvignon, syrah, zinfandel, tempranillo, chardonnay, sauvignon blanc, riesling and gewurtztraminer.

Students speak highly of Cunningham’s teaching and support. During the club’s early days, he forged a relationship with Acker Merrall & Condit, which for years has sold students wine at cost and provided speakers from its Wine Workshop. Cunningham also introduced DeVinimus to the Bordeaux presenters, Eynard and Emmanuel Cruse, the owner and winemaker of Château d’Issan, also in the St. Julien appellation.

On the night of the Bordeaux tasting, the DeVinimus board members had set out bread, grapes and other palette-cleansers at the back of the room. At each seat were a numbered placemat, twelve glasses with about a shot’s worth of wine in each, a water cup and an empty cup for unwanted wine.

Cruse remarked on the huge turnout. The first time they did a Law School tasting, three or four years ago, around 40 people attended, he said.

For the recent Bordeaux tasting, approximately 150 showed up. The club’s ranks have swelled, with 120 paid members for the 2006-07 year and 150 paid members this year, and 50 students on the mailing list. Membership leans toward first-year students, though all classes are represented.

Members pay annual dues of $95 for 12 tastings. Non-members, including students as well as friends and spouses not enrolled at the Law School, can pay $25 per DeVinimus event.

Some themes recur each year, such as the popular champagne and Bordeaux tastings and the Wines 101 kickoff, which introduces students to basic tasting techniques, skills and vocabulary. Others are voted on by the student board, such as a Malbec event held this November – beating nominations for nights dedicated to wines under $20, New York wines and Italian wines.

At the Bordeaux event, Cruse and Eynard referred to a map scribbled on the whiteboard behind them to discuss the history of the varietal, the region’s soil and the balance of cabernet sauvignon, merlot and petit verdot – “a superbooster!” said Cruse, meaning the grape is used in small percentages to give a blend more structure.

Students asked about competition between New World and Old World wines, the influence of critics on production, and the merits of natural versus artificial cork versus screw-cap. In response to a question about the French laws regulating wine in a given region, Cruse exclaimed, “Too many!”

Winemakers find it useful to promote their product to future lawyers – so much so that they sell it to DeVinimus wholesale, or, as was the case with Châteaux Lagrange and d’Issan, they donate wine for an entire evening.

As the Bordeaux tasting progressed, the wine took effect. Several students took out their camera phones and mugged with their empty glasses. Chatter escalated and glass clinking grew louder. As the tasting approached pour number 12, few students took much advantage of their spit cups.

Fun is what Professor Jack Greenberg had in mind when he began the club in 1995. “It’s very good for morale and spirit,” he said.

Greenberg created the club with Bernadette Barnard ’98, who was a first-year student in his civil procedure class. The two had met by chance a year earlier when she was an assistant sommelier at Charlie Trotter’s in Chicago and a law school applicant.

Greenberg called the late David Sacks ’48, his classmate from high school, Columbia College and Law School and the former president of the Seagram Company.

Sacks connected DeVinimus with wine importers, and the club started sipping. Sacks also was partly responsible for the name: When Greenberg said he thought he might call it “Grape Nuts,” Sacks prodded him to do better. Greenberg then came up with “DeVinimus,” which the group trademarked in 2000. The nonsense phrase plays on the legal term “de minimis,” from Latin for “about minimal things,” often used to describe something unworthy of the law’s concern.

During the recent Malbec tasting, David Hamburger, a speaker from the Wine Workshop, revealed his preference for a 2002 Cahors from the South West of France over a 2006 Malbec from Argentina.

“But it’s subjective,” he said. “There’s nothing wrong with comparing a Big Mac to foie gras, or with liking Jackson Pollock more than da Vinci.”

By show of hands, more students indicated preference for the New World wines. But support for the Cahors was still strong.

A student takes notes on the appearance, nose and palate of a 2005 Clos Roche Blanche Touraine Cot from the Loire Valley.