When Is Preemptive Military Attack Permissible? 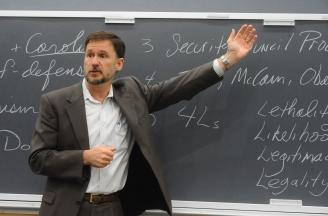 November 6, 2008 (NEW YORK) – Covering conflicts from the Revolutionary War era to the 2003 invasion of Iraq, Professor Michael Doyle held rapt about 50 students on October 29 with his lecture on when American forces can launch a preemptive military attack.

Doyle, the Harold Brown Professor of International and Public Affairs, of Law and of Political Science, began his lecture with the Caroline Doctrine, which dates from 1837 when British forces sank a U.S. steamship in New York, in what they called self-defense. “That set into motion what would become the international law doctrine on prevention – that self-defense can only be used as a reflection of overwhelming necessity, it leaves no choice of means and no moment for deliberation.” But today, Doyle said, Caroline is “too tight and too narrow of a doctrine … It does not deal with the threats we deal with today.”

“By definition terrorists who use suicide tactics cannot be deterred,” Doyle said. If Caroline is too narrow, Doyle argued the Bush doctrine is over-broad. Doyle, who has advised Democratic President-Elect Barack Obama, argued there was no hard evidence of weapons of mass destruction in Iraq.

“What about North Korea, what about Iran where the evidence is way above that irrational threshold? It’s a very serious problem,” said Doyle, who also served as Assistant Secretary General and Special Advisor to Kofi Annan, the Secretary General of the United Nations from 2001 to 2003.

The United Nations Security Council should be a key stop before preemptive action. Doyle admits the Council “has not always behaved responsibly,” such as during the Cuban missile crisis and in conflicts in Kosovo and Bosnia.

Obama has said he supports the Security Council, but has also said he would act without it if necessary, Doyle said. Republican candidate John McCain favors creating a League of Democracies instead of relying on the U.N. Doyle argued that a group culled from democratic countries would not be significantly different from the existing Council.

Instead, Doyle said the next president should look to the standards lethality, likelihood, legitimacy and legality which he details in his new book, Striking First: Preemption and Prevention in International Conflict. The extremity of the lethal action could justify preventive action. Likelihood goes beyond factors like whether a threatening nation is headed by a dictator. “You need to find a will toward aggression,” Doyle said.

“There are a lot of threats out there in the world. Many of these can be lived with,” Doyle continued. “Stalin was a definite threat but wisely the American state engaged in a relationship of deterrence – we waited it out.”

When it comes to legality, Doyle said nations should look to whether “the threat stems from illegal behavior by the threatener.” If a state violates existing U.N. Security Council measures, such as the one that bars states from harboring and abetting terrorists, preemption is more justifiable.

Doyle also took questions. One student asked whether the U.S. could act preemptively in defense of another country. Doyle said it could, if it went first to the Security Council, which has enacted Article 39 to deal with threats to peace or acts of aggression.

Another student asked Doyle about the differences between his doctrine and President Bush’s. Doyle said a crucial component of his approach is that it includes national and international investigations after a preemptive strike.

“There has been no systematic examination of the March invasion of Iraq,” he said. “These are not unreasonable additions to the body of international law, if we are going to live in a world where we are not prepared to live by Caroline and Article 39.”

Richard N. Gardner, Professor of Law and International Organization, who presided over the lecture series, asked the final question. He noted that during the Cuban missile crisis, President Kennedy ordered the military to search ships in Cuban waters – a step he took without going to the security council. “Were his actions illegal?” Gardner asked. Doyle’s response brought a laugh from the audience. “My argument was that it was illegal,” he said, “but justifiable.”

The Center on Global Legal Problems addresses globalization's legal dimensions through diverse interdisciplinary research and scholarship. The Center, founded in 2003, supports collaborative research with professional disciplines outside of law and with professional schools of business, journalism, public health, and international and public affairs. It hosts periodic conferences and speaker series and supports associations with other Columbia University centers and programs as well as joint programs with international organizations such as the United Nations. The Center’s executive director is Professor José E. Alvarez.