Weighing in on Women and Work

Women lawyers should have a clear idea about the skills, relationships, and experiences they want to take away from each new opportunity in their career, says Esta Eiger Stecher '82, who was honored by the Columbia Law Women's Association

New York, May 1, 2013—The Columbia Law Women’s Association honored Esta Eiger Stecher ’82 with their Distinguished Alumna Award at the 33rd annual Myra Bradwell Dinner on April 9. In her remarks, Stecher articulated lessons about taking risks, new career opportunities, and the importance of mentors for the law students and recent graduates in attendance at the event held at University House.

“We are in the midst of a national debate,” said Stecher, chief executive officer of Goldman Sachs Bank USA, referencing the raft of recent commentary on women in the workforce. “For over 30 years, many people have tried to figure out why there are so few women in leadership positions and if they can ‘have it all.’”
A member of the Columbia University Board of Trustees and Columbia Law School Dean’s Council, Stecher began her career as a tax attorney at Sullivan & Cromwell, becoming a partner in 1990, and subsequently head of that firm’s tax group. Four years later, she joined Goldman Sachs as a partner and head of the tax department. In 2000, Stecher was named general counsel, a position she held for more than 10 years. She assumed her current role as chief executive officer of the firm’s commercial bank in May 2011.
“You get offered lots of opportunities in your career to take calculated risks,” she explained. “[If] a terrific opportunity comes along that’s different from anything you’ve done before, you should take it and you should do it really well.”
The annual event is named for Myra Bradwell, who was rejected by the Illinois Supreme Court and the United States Supreme Court in her bid to become the first woman admitted to the Illinois state bar. In its opinion the nation’s highest court found that a career in law would be inconsistent with “the natural and proper timidity and delicacy which belongs to the female sex.” Bradwell later won her appeal to Illinois and was granted a license to practice law in 1890.

David M. Schizer, Dean and the Lucy G. Moses Professor of Law and Harvey R. Miller Professor of Law and Economics, introduced Stecher and cited wisdom as her defining trait. Schizer first heard about Stecher when he was a tax lawyer at a firm that competed with Stecher’s practice at S&C. “She was simply legendary,” he said, “even in the very beginning of her career.”

Stecher advised women to do more to promote their work to supervisors and to build relationships with people who can act as career advocates within their organization. “We may never fully understand why there are fewer women ‘at the top’ than men, but that only means that women should work harder to form relationships with a diverse group of advocates and mentors.”
Stecher said that she once worked on a real estate matter in which the two men in the negotiation began arguing so vociferously that one reached over the table and lifted the other up by his tie. “I knew that was never going to be my style,” Stecher said with a smile, “but I learned a lot about negotiating.”
Stecher’s advice that “you can learn a lot from people who don’t look like you,” struck a chord for many. “It reminds me that everyone has a lesson to share,” said Mariel Fernández ’13. Katherine Park ’14, chair of the event, agreed, saying “[her] comments were so timely and relevant.”
Kathryn Benedict ’14, was also honored at the event with the Myra Bradwell Note Winner for original scholarship on gender and justice. Her article, “When Might Does Not Create Religious Rights: For-Profit Corporations’ Employees and the Contraceptive Coverage Mandate” will be published this year in the Columbia Journal of Gender and Law.
Can women have it all? “I think you can have it all over time. There is no one right answer that works for everyone,” Stecher said. “The first thing is to figure out what you want to get out of your career, and then figure out how you’re going to get there. You have to decide how you want to prioritize the many demands on your time. And you need to approach it with a clear view of the tradeoffs, as well as an understanding of your values.” 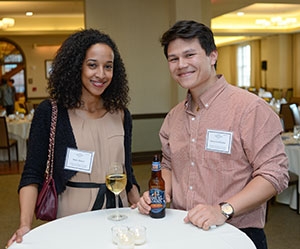 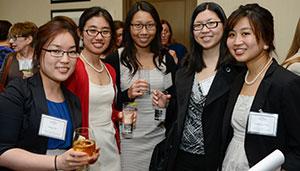