Voter Suppression in the 2016 Election? 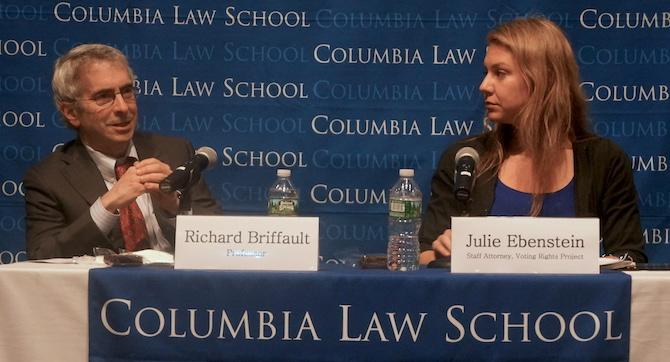 As the 2016 presidential campaign enters its final month, voter turnout could play a crucial role in determining which candidate wins on Election Day. At the same time, a rise of legislation aimed at disenfranchising voters in recent years has been dramatic, said Columbia Law School Professor Richard Briffault during a recent talk presented with Julie Ebenstein—an attorney with the ACLU’s Voting Rights Project—that was the second session in the Law School’s “Lawyers, Community and Impact” series.

The emergence of widespread voter ID legislation, cutbacks to early voting and same-day registration, and challenges to out-of-precinct voting over the past decade have served as a “crescendo to the politicization of voting,” said Briffault, the Joseph P. Chamberlain Professor of Legislation. In states such as Wisconsin and North Carolina, Republican legislatures have sought to disqualify voters—namely Democrats—under the guise of preventing voter fraud, he said. This fall, 15 states, including Ohio, North Carolina, and Wisconsin, will employ voting laws never before used during a presidential election. “Virtually all strict new voting laws were adopted in states with Republican governors and legislators,” said Briffault.

Laws requiring that voters show photo ID first began to emerge in 2005 in Georgia and Indiana, and have since spread to 34 states. In 2008, the U.S. Supreme Court ruled in Crawford v. Marion County Board of Elections that Indiana’s law requiring voters to have picture identification was constitutional, paving the way for other states to implement similar laws.

According to Ebenstein, deeper restrictions have proliferated since the Supreme Court’s shocking 2013 ruling in Shelby County v. Holder held that Section 4(b) of the seminal Voting Rights Act (VRA) of 1965 is unconstitutional. Once states previously covered by the VRA no longer needed to obtain pre-clearance before passing new voting laws, many were emboldened to enact legislation suppressing voter access.

In this year’s NAACP v. McCrory, North Carolina argued before the 4th Circuit Court of Appeals that it had discriminated against African-American voters on the basis of party, not race. Using race as a proxy for party is unlawful, Ebenstein said, questioning when courts would recognize the damage such actions have on democratic processes and voters, in general.

Of course, not all changes to voting law are regressive, Briffault said. Virginia Governor Terry McAuliffe’s effort this year to re-enfranchise ex-felons and automate voter registration reflects intensive political efforts to extend the ability to vote to more citizens, he explained.

“The goal should be to expand access to the franchise for every qualified voter,” Ebenstein added. “You have to ask: Why are states spending money on litigation to restrict access?”

“Lawyers, Community and Impact” is a series born from discussions between administration, faculty, and students that seek to enrich the Law School experience by contextualizing it within current legal and societal challenges. Professor Jeffrey Fagan outlined the future of police reform during the series’ first event held last month.